A chocolate tour of Edinburgh – the stuff of (sweet) dreams… 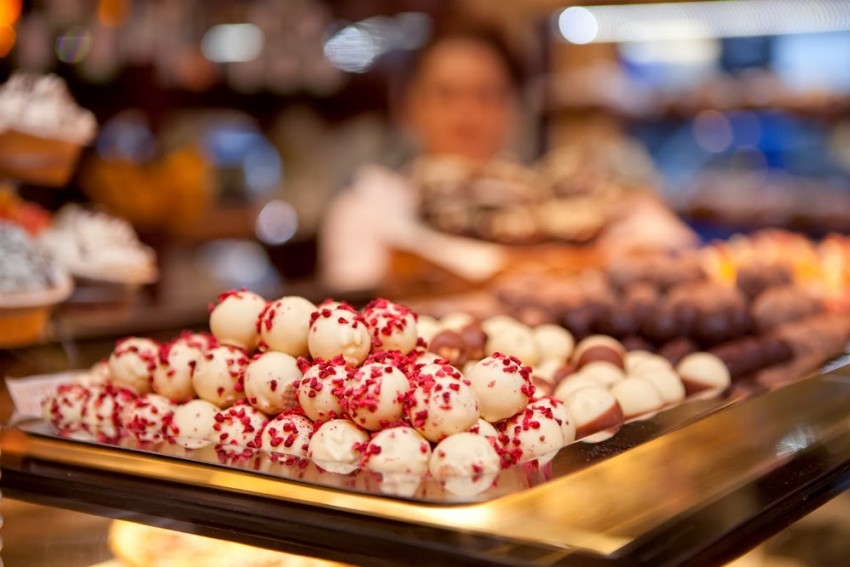 The past few weeks have involved a lot of writing and editing work (i.e. the remunerative word generation and rearranging that pays bills rather than the more-enjoyable-but-not-remunerative blogging stuff!). However, there have been two culinary highlights squeezed in among all the wordsmithery, and this post is an account of the first…

It all came about as the result of a tip-off from a good friend, who also happens to be a tablet-maker extraordinaire and thus knows her sucrose. Aware of Yours Truly’s proclivity for anything sweet, she forwarded me details of an ‘itison’ deal offering discounted tickets for the tantalisingly titled “Chocolate Tour of Edinburgh”.
A quick check-up online revealed several positive reviews, so I hastily booked two tickets for an unspecified date in the future, suspecting that DD1 would not require much persuasion to accompany me. Suffice to say, she didn’t.
A mutually suitable date was duly agreed, I booked our places online and one bright, late-September afternoon the two of us rocked up at the French Patisserie Valerie on Rose Street in Edinburgh (there’s also a branch on North Bridge), ready for some serious chocolate consumption. There we were greeted by two cheery young ladies – Jules and Maria – who were to be our charming and informative tour guides for the afternoon.
Our group consisted of 10 people: six Chinese visitors (including two adorable little boys, who solemnly and determinedly consumed just as much chocolate as the adults) and four Scots – DD1 and I plus a cheery young local couple (both of whom were traffic wardens, which made for interesting chat along the way!).
Maria and Jules began by advising us to buy a bottle of water to carry with us during the tour (to cleanse our palates between chocolate stops!) and then gave us a brief history of chocolate throughout the world as well as in the UK. I’d been aware that the Mayans first invented hot chocolate in its earliest form, but was interested to learn that the first chocolate bar was made by Joseph Fry in London back in the 18thcentury. He it was who introduced factory methods to the production of chocolate.
We tasted our first “exhibit” of the tour from a selection of Patisserie Valerie’s tempting truffles – DD1 opted for a delicate rose champagne truffle while Yours Truly plumped for a more full-bodied white chocolate truffle. Each of us pronounced our choice to be excellent and our anticipation levels for the afternoon to come rose commensurately…

I have to confess that being faced with the prospect of gorging chocolate all afternoon, I had mentally psyched myself for copious cocoa bean derivative consumption, so I was initially somewhat taken aback just to be offered one truffle at the first stop on the tour. However, as we progressed, any slight disappointment soon turned to immense gratitude for the prescient prudence of the organisers – it rapidly became evident that pacing oneself was essential on this yummy marathon so this “gentle” start was absolutely the right approach.

Next stop on the tour was just a couple of hundred metres’ walk away, at the renowned Hotel Chocolat on Hanover Street. Here we were served a small cup of the richest, most luxurious hot chocolate that I have ever had the pleasure to taste (and that even includes the fabulous chocolate gloop served at Angelina’s in Paris). Yours Truly would happily have drunk a vat of this divine cocoa nectar, but the tour may well have come to a premature end if I had!

As if this was not gastronomic heaven enough, we were then offered the chance to sample a couple of fabulous truffles, to boot.  I chose blackcurrant cream the first time – and indeed the second time, the first having been so good that I simply couldn’t resist another! Somewhat dangerously, we were given five minutes to browse in the shop and make any purchases deemed necessary – true to form, neither DD1 nor I required a second bidding.
The third stop on the tour was a just couple of doors further up Hanover Street at Bibi’s Cake Boutique which – our guides advised us – was renowned for its prize-winning chocolate brownies. As soon as we bit into these idyllic chocolate-imbued creations, it was easy to appreciate why their reputation went before them.

Bibi’s counters and shop windows boasted a cornucopia of colourful cupcakes, and it was genuinely hard to tear ourselves away (not to mention stop drooling!). But move on we must, so a brisk 10-minute walk ensued. This brought us to the Coco on Broughton chocolaterie, there to sample cheekily-named Tia Maria truffles known as “Venus nipples” (check out the photo and the derivation of the name will become immediately apparent!).

Our fifth stop on the tour involved another five-minute walk followed by an elevator ride to the top floor of Harvey Nichols, where we viewed and tasted the work of The Highland Chocolatier, Iain Burnett. His tiny cubes of pure truffle ganache filling simply melted in the mouth and I found the delicate artwork on his chocolates somehow reminiscent of William Morris designs.

Then it was across Princes Street, through Waverley Station, and uphill for a couple of hundred yards to the Royal Mile where we found stop no. 6: The Fudge Kitchen. There we were tempted by almost every flavour of fudge known to man and even allowed to sample several flavours, my personal favourites being “strawberries and cream” and “salt caramel”.
It has to be said that even the most ardent chocolate fanatics in the group were beginning to fade slightly by this point (and my feet were in need of an ice bath!), but we rose unanimously to the occasion and downed our fair share of delicious fudge! DD1 and I also invested in some sachets of “fudge hot chocolate”, which I’m saving for a particularly dreary November day.
Finally, to conclude our ever-so-slightly calorific but utterly terrific tour, we visited a shop that resembled something from a children’s fantasy story penned by the inimitable Roald Dahl himself. Entering Lickety Splits was genuinely like stepping back in time for the oldest member of the group (i.e. Yours Truly). Familiar sweets and treats of my long-distant childhood lined one wall of the shop while the opposite wall was given over to local craft and jewellery, which provided an unusual but attractive complement to the shop’s stock.
Effervescent proprietor Naomi gave us an excellent and comprehensive talk on the origins of some of Scotland’s most “traditional” sweets e.g. macaroon bar (I hadn’t been aware just how often coconut features in traditional Scottish sweets – nor that in the past it was wrapped round meat to keep it fresh!).
We were also shown some Irn Bru humbugs, which were Barr’s original product before the advent of the eponymous Irn Bru drink that is so famous nowadays. DD1 and I bought a “quarter” of the said Irn Bru delicacies for Son&Heir as a housewarming present for his new flat, though after we’d tasted them, his chances of ever seeing them rapidly began to dwindle….
Undoubtedly the most fascinating traditional sweets in the shop – although their overpowering cinnamon content meant they were not to my taste – were the “lucky tatties”. These  flat, rather unpromising-looking brown objects were apparently often carried by miners, as their high energy content meant that a miner could survive three days underground on one of these alone. No wonder they were considered “lucky”.
And so our wonderful tour came to an end, as indeed all good things in life must. Both DD1 and I gave the experience a full 10 out of 10, despite the fact that we were a tad footsore by the end. Even if we had paid the full price per ticket (£30), I reckon the tour would still have offered good value for money. The fact that we only paid £14 per head, thanks to the itison deal, made the experience (apologies in advance…) all the sweeter!
Oct 14, 2013Karen Elwis
Uncategorized178

Why nothing goes to waste on Swiss farms
A magical evening: dinner at The Witchery in Edinburgh