A magical evening: dinner at The Witchery in Edinburgh 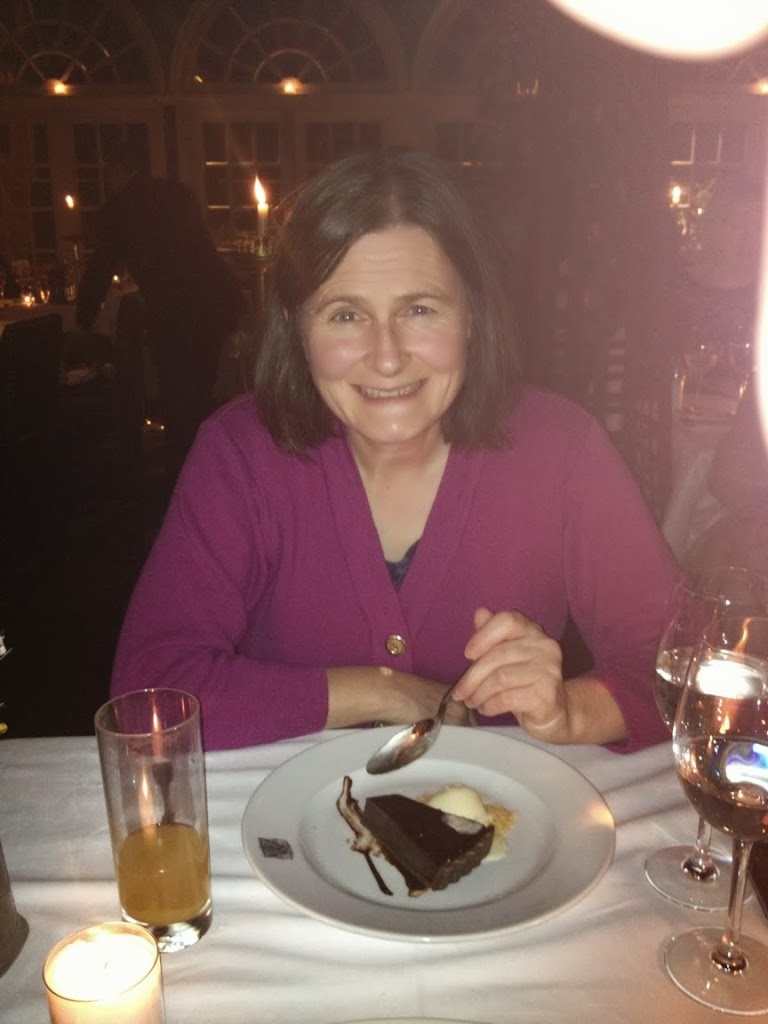 Clichéd as it may sound, there is genuinely something magical about The Witchery by the Castle – one of Edinburgh’s most renowned fine dining establishments and the venue for the final ‘instalment’ of my 50th birthday celebrations this year.
Regular readers of this blog may recall that my generous little brother (a mere stripling at 48 years of age) kindly gifted me a voucher entitling me to dinner for two. So it was that one evening in early October – far enough in advance of Hallowe’en to ensure we didn’t encounter any supernatural shenanigans! – HunterGatherer and I parked the car beside Castle Terrace car park and strolled in leisurely fashion up the road that leads alongside the castle.
Progress was somewhat slower than might normally have been the case, as Yours Truly was nursing a recent (hockey-induced) tear to her Achilles tendon, and the said injury was definitely not appreciating the multiplicity of steps in the ascent to the top end of the Royal Mile. Still, Edinburgh was at her glorious best in the rapidly falling darkness, with the castle lit up dramatically against a stormy cobalt sky, so at least our steady pace meant we had more time to absorb the unique ambience of Scotland’s capital.

We hesitated for a few seconds beneath a historic-looking sign that signalled our proximity to the restaurant, and peered down a dark, narrow alleyway lit at the far end by myriad fairy lights. Any discomfort in my ankle “disapparated” on the spot, as pain was superseded by excited anticipation. Walking into Boswell’s Court felt like stepping into a scene from Harry Potter, an impression which only intensified when we were met at the door by a delightfully eccentric young man, impeccably turned out, who stood behind a podium and ticked our names off his list with a flourish before pointing us down a wooden staircase. Given the extreme popularity of The Witchery, we had booked our table well over a month in advance to secure a Friday evening slot. The moment we reached the bottom of that staircase, it was evident that every minute of our wait had been worthwhile.

Before us lay another ‘Potteresque’ scene. By the slightly eerie flickering light of the candles placed on each table, we could make out the far end of a sizable Gothic-style dining room. The decor was extravagantly impressive, with ornate wooden panelling, immaculate white table cloths and padded, leather-upholstered seating. It was hard to believe that prior to 1979, the year in which James Thomson – the visionary proprietor of The Witchery – launched this atmospheric eatery, the property had been a near-derelict basement. We were interested to note the building’s connection with Boswell, as HunterGatherer spent several of his teenage years residing in a former inn that was visited by Boswell and Johnson during their tour of the Hebrides in 1773. But I digress – back to 2013 and The Witchery.
In all honesty, we had both found the prospect of dining at a restaurant so far beyond our normal means slightly daunting – indeed, we almost felt like imposters when we confessed at the outset that we would be paying with a voucher! However, we needn’t have worried one whit, as our dedicated waitress for the evening and indeed every member of staff with whom we came into contact were disarmingly agreeable. I can’t quite put my finger on how they achieved the perfect balance of hospitality, but they were friendly without being over-familiar, professional without being stilted, and helpful without being pushy. In short, their service was flawless – as, it rapidly transpired, was the food they served.
According to the restaurant’s website, The Witchery menus feature “the finest seasonal Scottish produce”. As you might imagine, this meant we were spoilt for choice and spent some time dithering over our selection. Eventually, HunterGatherer plumped for delicious Tweeddale pigeon breast, served with warm salad of gem lettuce, peas and pancetta with pigeon consommé. Keen to try something different, I opted for a colourful Terrine of Phantassie Farm vegetables with pumpkin sorbet and pecorino cracknel. Both starters met with their respective recipients’ full approval.

The main courses duly arrived and looked just as promising. HunterGatherer had signed up for the Roast Fillet of Limousin Scotch beef, served with blanquette of chard, Scottish girolles (aka chanterelle mushrooms) and rosti potato. He immediately professed the meat to be ‘melt-in-the-mouth perfection’, though (being a Scottish ‘farmer cheil’ at heart) he was heard to ponder sotto voce why it was Limousin (a French breed) rather than Aberdeen Angus beef!  My meat choice proved equally rewarding in the flavour department: tender roast loin of Cairngorm venison accompanied by a vegetable selection including celeriac dauphinoise, kale and parsnip purée, plus crisps and chocolate oil. ‘Twas edible heaven.

At this point in proceedings, having done full justice to my first two courses, I began to flag ever so slightly and had to accept, albeit very reluctantly, that I probably didn’t have the capacity for the item on the desert menu that had most appealed to me: the ‘taster’ platter. Fortunately, HunterGatherer was made of sterner stuff, and while I restricted myself to a single slice of rich chocolate torte, he ordered the six mini-desert extravaganza. 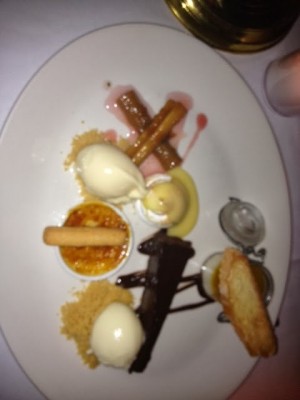 It has to be said that the above fuzzy photo in no way does justice to the enticing presentation of this eclectic desert selection. Unfortunately, my trusty Blackberry was failing miserably to cope with the dim lighting in The Witchery, so I rashly asked HunterGatherer to take a photo of his impressive platter of puds. What can I say? Apart from “never send a man to do a woman’s job i.e. photograph puddings.”

So desperate was my dining companion to dive into his tantalising assortment of delectable desserts that he rushed the shot and blurred what was (in my eyes) the most important photo of the night. Still, at least he didn’t make toooo bad a job of the photo of my pudding (and me!), plus he let me sample every single one of the opulent offerings on his plate, so I’ll forgive him for his lack of photographic prowess – this time…

All in all, our visit to The Witchery was a fittingly fabulous way to bring my birthday celebrations to a memorable conclusion. If I’m utterly honest, I’d have to confess that this turning 50 business hasn’t been nearly as bad as I’d feared. In fact, I might even recommend it!
Nov 18, 2013Karen Elwis
Uncategorized196

A chocolate tour of Edinburgh – the stuff of (sweet) dreams...
November and December: late strawbs, amorous sheep and fairy lights!