A mysterious Hallowe’en package arrives at the Sparrowholding… 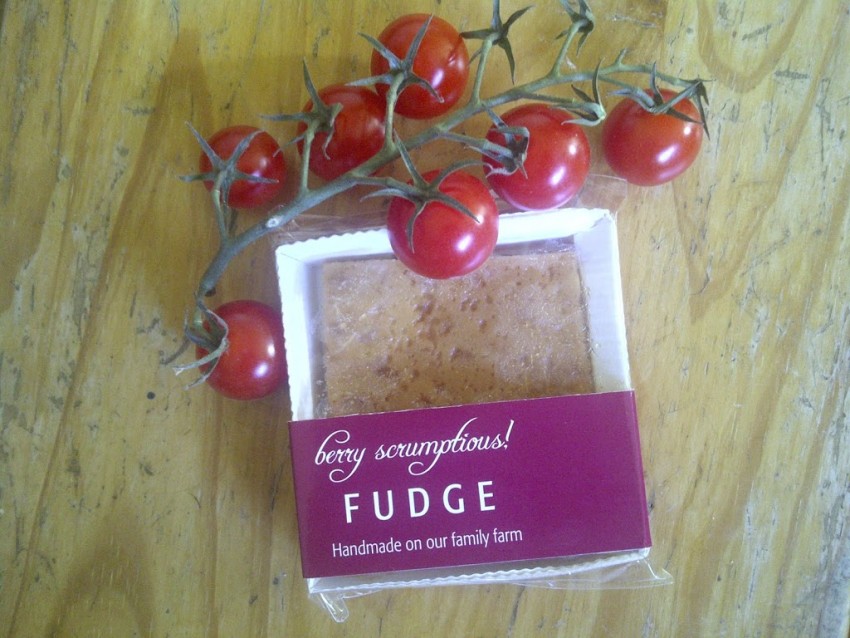 “Season of mists and fudgy fruitfulness…” OK, perhaps that wasn’t quite how Keats captured autumn – his version was similarly alliterative, but distinctly more lyrical. However, the reason for me misquoting the bard and committing this literary travesty with the opening line of his famous Ode to Autumn is because fudge has been front of mind this week.  Why? Because something extremely exciting happened… Yours Truly received her first ever product for review on this blog.  Funnily enough, there are no prizes for guessing what it was. Yep, got it in one: fudge!
However, be assured that this was no ordinary fudge. It was a sample of seasonal ‘Halloween Fudge’ from burgeoning Scottish food company Berry Scrumptious, who are based in Rosehearty, Aberdeenshire. What’s more, as I was rapidly to discover, its unique zingy taste is guaranteed to make even the scariest witch or spook stand up and take notice.

Fortunately, having a home economics teacher as a mother, I was trained – from the moment I could first differentiate one letter of the alphabet from another – to pore over the ingredients list of any comestibles before letting them within an extendible fork’s length of my lips. This meant that after a quick glance at label on the back of the packet, rather than anticipating the usual intense sugary explosion that tends to accompany a mouthful of commoner gardener fudge, my palate was primed to expect a rather different sensation from this special seasonal variant which arrived through my letterbox this morning.

Indeed, with tomato puree, celery salt, Tabasco sauce and (wait for it…) vodka on the ingredients list, this ‘confectionary from the cauldron’ boded to be more like a Bloody Mary than a mundane sweetmeat.
When I first sank my teeth (or perhaps I should say “fangs” to sustain a suitably ghoulish theme!) into the fudge, it was actually sweeter than I’d anticipated – but a mature, autumnal sweetness rather than the usual sucrose rush.  So far so good…  There was a tang of tomato as a slightly savoury, yet also faintly fruity, flavour developed (hardly surprising, since tomatoes are, of course, technically a fruit!). Then, at the very last moment, as the fudge fully dissolved in my mouth, came the Tabasco kick – somehow unexpected, even though I’d known it was in the mix – providing the perfect sweet’n’sour Hallowe’en twist for refined adult taste buds.
So this year, if you’re daring enough to try something a tad different from the ubiquitous orange foil-wrapped chocolate pumpkin lookalikes and tasteless ‘horror’ jelly creations, think Bloody Mary fudge – but it’s a limited edition, so you’ll need to get on your broomsticks fast!
Oct 15, 2012Karen Elwis
Uncategorized64

Not all F-words are bad...
Autumn in and around the Sparrowholding