A weekend of food, glorious food in Fife’s East Neuk

Catching up with old friends is a very pleasant way to pass the time, and last weekend I was able to do precisely that, twice over, during a highly enjoyable visit to the much-acclaimed annual Crail Food Festival. I was accompanied on this “foodie road trip” by a friend, L, whom I’d not spoken to for many months (perhaps even a year!). We duly set off in excellent spirits around 10 a.m. on Saturday, and before we blinked, the miles between Kinross and Crail had disappeared in a good old blether and we were drawing up outside Crail Community Hall.
A queue had formed down the steps of the hall, so we waited patiently in line to pay our £2 entry fee and be unleashed into the traditional building, which had been transformed into a gastronomic Aladdin’s cave for the day. And certainly there were edible treasures aplenty to be discovered once we entered the hall – our only problem was which of the tantalising stalls to visit first. It was at this point that I set eyes on an old school friend, Jane Stewart, who was manning her Anster cheese stall. Fellow cheese-lover L. and I needed no further excuse to hotfoot it over to the St Andrews Farmhouse Cheese Company table and sample snippets of several of Jane’s delicious crumbly cheeses. We each purchased a pack of mature cheddar plus some cheese oatcakes (you can never have enough cheese, I find!) to take home for consumption later.
Where next? We paused to consider, and I immediately espied yet another familier face at the stall next-door – it was Sophie from The Pittenweem Chocolate Company, who had organised the fabulous chocolate workshop I attended last Easter Monday. On this occasion, in addition to her multifarious chocolate concoctions, Sophie was selling giant waffles. Of course, having exchanged pleasantries with Sophie, it would have seemed slightly impolite not to buy her wares, so L. and I decided to split one of the icing sugar drenched delicacies between us. Perhaps unsurprisingly, given Sophie’s Belgian roots, it was quite simply the best waffle either of us had ever tasted, possessing the perfect consistency.
Aaah, we could have waffled on for ages about how wonderful that waffle was, but there were other stalls awaiting our attention, with artisanal products to peruse ranging from raspberry jam to raspberry gin. Being teetotal, I had to rely on companion L for feedback on her snifter of the latter, and the verdict was that it was good – so good, in fact, that L later invested in a bottle (plus a bottle of elderflower gin, too, just for good measure). Meanwhile, I tucked into a freebie spare rib, coated in a delicious glaze, from the Balgove Farmshop stall, before both L and I sampled a selection of the prolific assortment of pickles and vinegars for sale.
One stall that seemed to be doing a rip-roaring trade was that of G H Barnett, the local bread makers. Loaves were flying off the table and into brown paper bags faster than you could say “salt dough” – and talking of salt dough, L purchased a portion of said product, which she later reported to be heavenly. Indeed, her only regret was that she didn’t buy two portions!
Having completed our inspection of the indoor stalls, we two intrepid food warriors ventured out onto the sun-kissed streets of Crail to embark on the trail of local eateries.  Each of these establishments was offering a “special” of the day to visitors, and we identified the mackerel and beetroot pâté at Julia’s cafe as sounding rather appealing. It certainly did not disappoint from the perspective of flavour or colour (have you ever seen pâté this purple?!).  We congratulated ourselves on our choice then promptly paid and headed down to the beach, hoping a leisurely stroll would create room for pudding later. 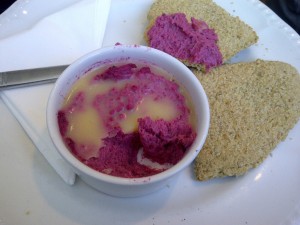 Mackerel and beetroot pâté – don’t mind if I do!
Down at the beach, conditions were nigh on perfect for a summer’s day: the sea was sparkling, the sky overhead was cornflower blue, and the air was balmy and pleasantly warm. We chatted about everything and nothing, and just enjoyed being out of doors in the rare Scottish sunshine. Simple pleasures…

Crail harbour Gallery and Tearoom was our next port of call, and here L and I each partook of a slice of very sweet and tasty lemon drizzle cake. The only slight bone of contention was that Yours Truly asked for a glass of tap water and, when offered hot water with a slice of lemon instead, accepted gratefully. Little did I suspect that I would be charge £1.30 for the said hot water! Refreshing though it was, I  felt the charge should have been made clear by the waitress when she offered it as an alternative. However, I’m really splitting hairs here: the hot water experience was a relatively minor blip during an otherwise lovely visit, and the yummy lemon cake more than compensated.

To complete our “foodie heaven” experience, we returned to the Community Hall and attended a game cookery demonstration by cookery author Nichola Fletcher. Having previously interviewed Nichola for a feature in a farming magazine several years ago, I’d been keen to see her “in action” at some point, and it proved well worth the wait. During her one-hour slot, she managed to demonstrate four different game dishes – each working out at less than £2 per portion, in deference to the recent credit crunch and its impact on people’s food budgets. On the menu were duck risotto (finished with Anster cheese), ham’n haddie served with vegetable ‘seaweed’ (a veggie stir fry), pigeon breasts pan-fried to perfection, and game meatballs served with salad and a spicy sauce for dipping. It was an spectacular feat (and feast!) of oven time management and hob ergonomics – and particularly impressive to someone such as myself, who struggles to get potatoes ready at the same time as the mince!

Sadly, as Nichola drew her entertaining demo to a conclusion, so our day of gastronomic self-indulgence also came to an end. All that remained was for L. and myself to clamber back into the car and wend our way homewards to share our purchases with our families. To keep our respective spouses happy, we had purchased them each a bottle of the St Andrews Brewing Company’s award-winning Crail Ale – which seemed somehow fitting.