Autumn in and around the Sparrowholding 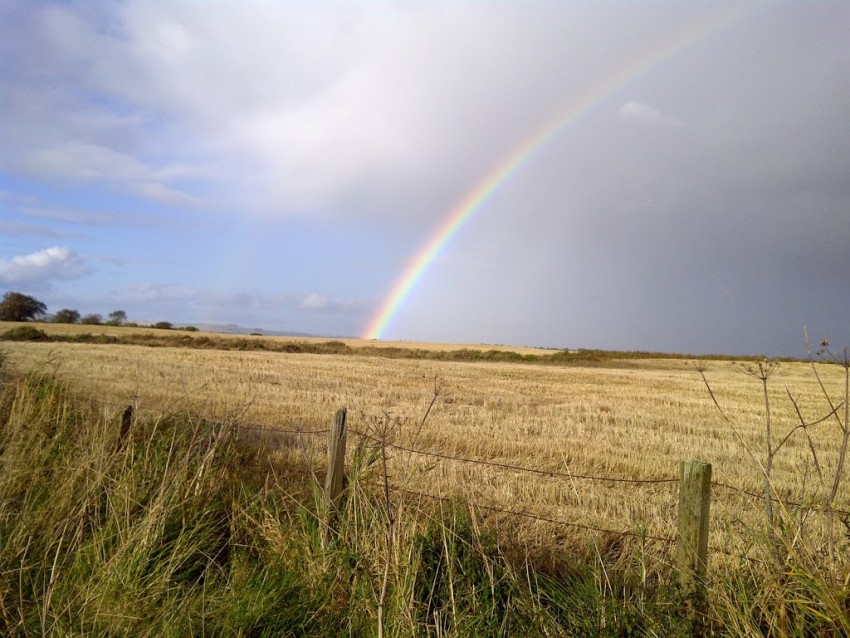 Several folk on Twitter have commented recently how much they’re enjoying the photos that I snap randomly in and around the lovely rural area where we live, so I’ve gathered a group of these photos together for my latest blog post. For once, I’ll let the pictures do the talking (mostly!)…
Somewhere over the rainbow… or in this case under the rainbow: newly cropped stubble fields around Loch Leven.﻿ 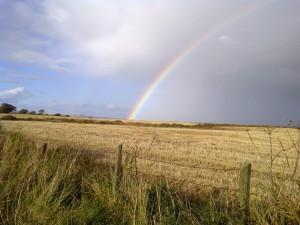 Our local hamlet’s book swapping “library” is housed in an old phone box.  It’s perfect for the job and, when it’s lit up at night, looks rather inviting – not to mention pretty darned cool :-). 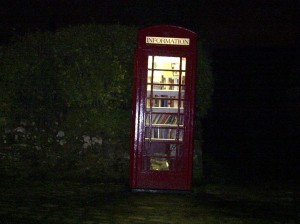 Last week we had so much rain that an impromptu mini-loch formed in the pony’s paddock.  When I posted this photo on Twitter, one tweep suggested that all I needed now was a “puddock” (Scots word for frog for any non-Scots reading!)  for my paddock. 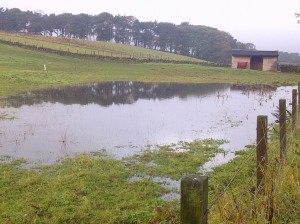 And lo and behold – what did we find on the track next to the paddock coming home that night: a puddock!? (Fortunately son+heir spotted the poor wee soul in the headlights before I flattened it!) 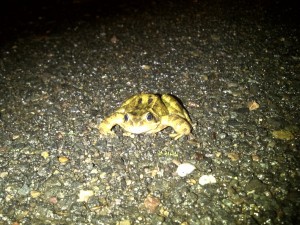 Of course, autumn in the sheep fank (Scots work for “pen or fold”) means it’s time to wean (or “spain” in Scots) last spring’s lambs from their long-suffering mamas. Three of our male lambs headed off to deepest Fife, where they are official orchard lawn-mowers.  Their new owner (who kindly sent me the photo below) also has alpacas, and when I asked her how her new trio of ovine incumbents were doing, she texted back: “They are settled well and have recovered from thinking that alpacas could be morphed mummy sheep!” 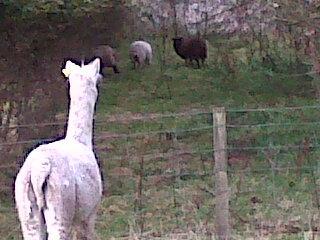 When I was wee, my granny used to talk about the autumn crocus flowers in the garden as “naked ladies”, which (as a child) I thought sounded very rude. Now I think they are such beautiful, delicate flowers and appreciate that this pseudonym is derived from the fact that the flowers appear all on their own, with foliage following later. 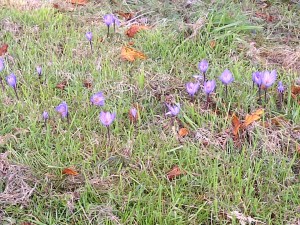 The crocuses have been far more productive this autumn than Vinnie the Vine.  Perhaps the sensitive chap didn’t like the fact that our polytunnel was ripped to shreds by the high winds in April? Whatever the reason, the grapes below were the sum total of our crop this year :-(. HunterGatherer can forget any wine-making plans! 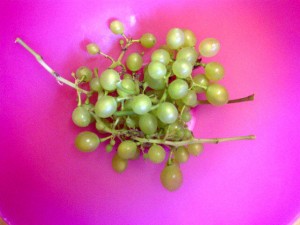 The local bramble bushes were much more bountiful in their fruit bearing, however, and there are still berries left which make welcome autumnal pickings for hungry birds. The vibrant hue of the turning bramble leaves below caught my eye while I was out jogging one morning last week – how I’d love a dress this colour. 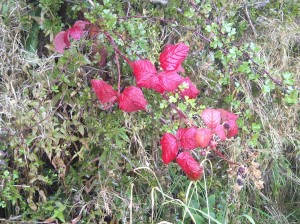 FatCat certainly does not believe in going jogging – or indeed even moving a paw when it can be avoided.  While I was out pounding the country lanes of Kinross-shire, this is what he was doing. Evidently he is oblivious to the autumnal delights that lie outside… 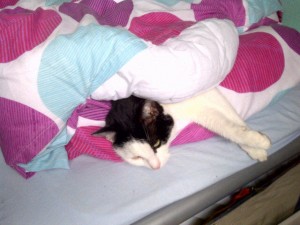 A mysterious Hallowe'en package arrives at the Sparrowholding...
It was going to be a Na NoWriMo Movember – but then someone shaved...