Back to normality (what is that again?) 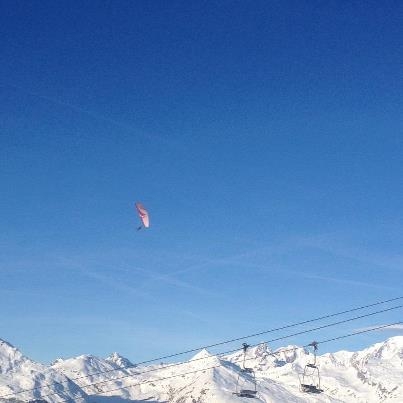 With HunterGatherer back on strawberry patrol in the polytunnels of Perthshire, the Daughterly Duo en route back to their respective seats of learning in Paris and Edinburgh, and Son+Heir away at school from 8.30a.m. – 4 p.m. every weekday, the house has suddenly become so much quieter.

It was strange to be a family of five again over Christmas and New Year for the first time since early September. That was when DD1 headed off on to the home of vin rouge, fromage and frogs’ legs, there to “se perfectionner” in the lingo of the land.

Despite having been raised in the countryside, first on various farms and latterly here at the Sparrowholding, she is a self-confessed “city girl”. Even when forced to wear wellies (when faced by the sea of mud that our garden became during the recent – frequent – periods of rain), she still maintains a certain fashionable “je ne sais quoi”.

In fact, she literally stepped out of the Parisian leopard-effect platform boots which she arrived in at Edinburgh airport straight into her strategically positioned cerise pink, fur lined Hunters. The said footwear still somehow managed to come through her 10-day festive visit with barely a dot of mud on them, unlike Yours Truly’s sheep-sharn*-encrusted Hunters… (*sharn = Scots word for dung)
I imagine that DD1 heaved a huge sigh of relief last week when she was able to slip back into her beloved leopard-lookalike foot attire (no daughter of mine!) and head down to deepest England-shire to attend a close Uni friend’s 21st – then spend a few days in St Something’s library in Oxford to ease her withdrawal symptoms before she ‘Eurostarred’ back to the bijou little flat she and two other students are renting in the 17tharrondissement.
To pay her rent, she has an evening job, after lectures, with a company that specialises in teaching foreign languages – in this case English – to young children at home after school. As a keen linguist, I think this is a fantastic idea – you can’t start learning a foreign language young enough. Better still, the two kids DD1 is teaching must think it’s pretty cool, too, as they’ve asked their parents if she can stay on rather than go back to Uni in October :-). She can’t, of course, but she did appreciate being appreciated!
We have booked a cheap flight to Beauvais airport for HunterGatherer to visit her the first weekend of March before the strawberry cultivations get into full swing. It would be unwise to leave the house in the hands of 17-year-old Son+Heir for a weekend (’nuff said), so as HG has never been to Paris before, and I have, it seems only right for him to get to go. Especially given that he and DD1 share a prolific knowledge of and passion for military history (er, and once again… no daughter of mine).
DD2, the Edinburgh busking (aka Music) student, also made a slight detour on her way back to Uni… via the French Alps – Les Arcs, to be precise.  She’s been squirrelling away her earnings from her part-time hockey coaching job for months, saving up for the big Uni Ski Trip. And, judging by a recent Facebook comment “I’m never coming home” – accompanied by a stunning photo of sun, ski and snow – she’s having a pretty good time. [If the typeface seems to have turned a little green here, that’s purely a trick of the light.]

Only Chuck the Cat remains to keep Yours Truly company during the day, and since he snoozes for hours at a time on one bed or another (preferably having inserted himself almost invisibly between the folds of the duvet, with only his whiskers protruding…), he isn’t exactly what you’d call a riveting companion.

Still, the one advantage of there being (virtually) no one to cook, clean and bottle wash for now is that it frees up lots and lots of time for work.  Oh goodie. Reckon I need a cup of hot chocolate (made with the real McCoy – Angelina’s precious cocoa powder, all the way from Paris) before I report to the copywriting coalface…

Love is...
You know those days when only chocolate will do...?