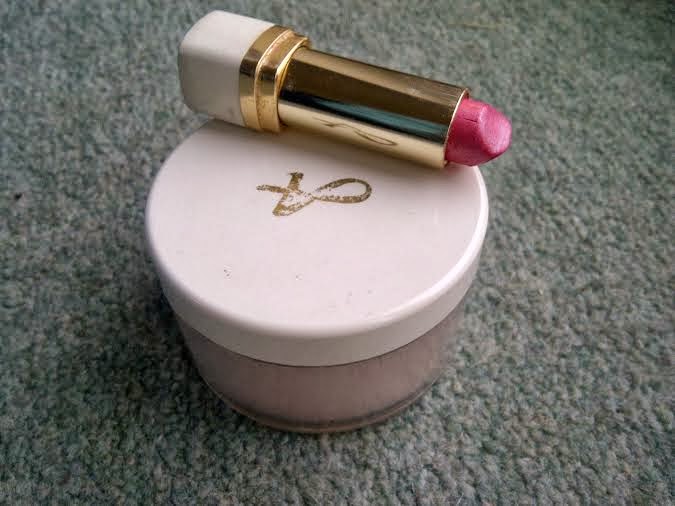 Of course, I blame my mother (aka SuperGran) for my obsessive hoarding. At the bungalow where FarmerBruv and I spent our entire childhood, the rafters used to creak (and still do!) under the weight of all the sentimental essentials stashed away in her attic.

And guess what? Here at the Sparrowholding, the attic is no less stuffed. Indeed I often wonder if we were both squirrels in a previous life.
Perhaps the seriousness of my hoarding compulsion will become evident if I confess that the picture above is of the lipstick and powder that I wore when HunterGatherer and I got married 24 years ago today, on a blustery but dry February afternoon in 1990.
I very, very rarely wear make-up, which probably explains why the lipstick and powder are still not finished! However, a friend did send me into a slight panic lately by pointing out that the chemical constituents have probably long since become toxic and that I’m no doubt risking some nasty skin complaint by wearing them, albeit occasionally!
So, by the time I write my next blog post, I resolve that I will have dispatched my antique pampering products to that celestial make-up counter in the sky. Or at least I might have – alternatively, they’ll have travelled marginally less far in a heavenwards direction and joined one of the burgeoning boxes of baby mementos, student memorabilia,  photo albums, books, music, etc. in our attic…
After 24 years of marriage, I suppose that I shouldn’t be surprised that HunterGatherer has recently started observing other birds… How liberal of me to be so understanding, I hear you cry. Perhaps I should explain that these birds are of the feathered variety. A few weeks ago we took the radical decision to move our bird feeders round the back of the house – and what a difference the new location has made to the number of avian species who pop in for an all-day breakfast.
HunterGatherer is transfixed by our chirpy wee visitors and, on the rare occasions when he’s home during daylight hours, is now to be found standing at the window, his gaze alternating between the merry band of breakfasters and his “Fool’s Guide to Birdwatching”. He is not the only person to be entranced – FatCat is mesmerised by the “breakfast” whirligig…
Still on the subject of auspicious days, tomorrow is another family landmark: DD2’s 21st birthday. It’s hard to believe that a whole year has passed since her inauspicious 20th birthday, several hours of which were spoiled by a rather unpleasant CrossCountry train guard. I’m pleased to report that on that occasion, the outcome was a happy one, as the customer complaints department was quick to respond and sent her complimentary travel vouchers to compensate – hats off to them!
Sadly, the unfortunate incident that has marred DD2’s 21st birthday celebrations is not likely to be so easily remedied… In the (less than) five minutes that it took her to pop from her room at Aix University student residenceto the kitchen (she was there and back in under five minutes), someone forced their way into her bedroom and stole not only her laptop but also her precious iPhone.
Perhaps the worst aspect of the theft was that it was carried out so slickly that it almost had to be an inside job – especially since someone had propped the door of the fire escape open to allow the thief to escape quickly. As you might imagine, this leaves DD2 feeling less than comfortable as she surveys the other occupants of the corridor…
Still, before we all feel too sorry for her (say “AAAHHH!”), I should point out that the upside of being a student in France at the time of her 21st is that she is going to be skiing on her actual birthday. Our family celebrations will have to wait for early March, when she abandons clement Mediterranean climes and returns for 10 days in not-quite-so-balmy Edinburgh.
Meanwhile, here at the Sparrowholding, there are definite signs that winter is winding up and that spring might come eventually…

Finally, in other news, Yours Truly is seriously chuffed to have been asked back as one of the guest bloggers for this year’s Crail Food Festival. As you may remember, last year’s assignments took me to two very different (but equally wonderful) local food producers, Seriously Good Venison and Pittenweem Chocolate Company. Needless to say, this eager foodie is on the edge of her seat waiting to see where she’ll be assigned in 2014. Bring it on!