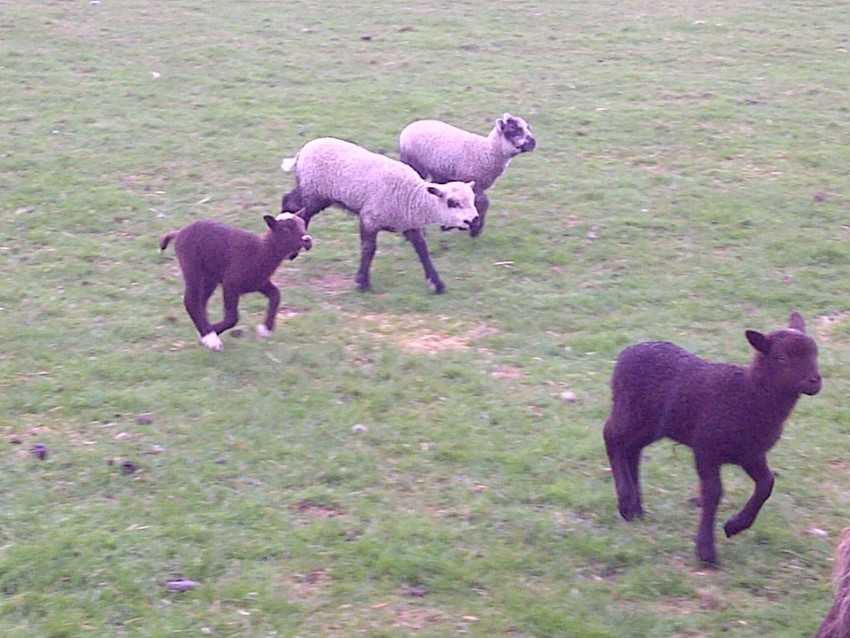 The second half of April passed in the usual frenetic flurry of ups and downs here at the Sparrowholding.  On St George’s day, Son+Heir celebrated his 18th birthday by sipping copious cocktails with a group of friends in our sitting-room. Meanwhile, through in the kitchen, HunterGatherer and I were also busy celebrating – celebrating the fact that we’re no longer technically responsible for him!
Baking not being one of my talents, I ordered the birthday boy’s cake from Celebration Cake Station in Perth – and, as ever (they did DD1’s and DD2’s cakes, too), they excelled themselves.  All Yours Truly had to do was email them an action photo, plus a close-up shot of his red astroturf boots and favourite stick so they could ensure the finer details of their masterpiece were correct.  Then I simply pitched up in Perth on the appointed day and collected the creation: piece of…er… cake.
Birthdays have also been occurring in abundance out in the paddocks this past couple of weeks, with a host of tiny cloven hooves now trotting merrily across the grass, which has luckily – at long last – begun to turn 50 shades of green. There are four sets of twins plus half a dozen single lambs hopping and skipping from dawn till dusk, and some very hoarse mums trying to keep their wee woolly jumpers under control. On the rare occasions when they’re not yelling at their we’ens too loudly, one can usually hear the mewing of a buzzard overhead or the call of a distant curlew: a veritable wildlife symphony, complete with a bleating ground bass.
Talking of bleating, Son+Heir and his team mates in the Scotland U18 men’s hockey team underwent a painful yet remunerative procedure last weekend when they all had their legs waxed to raise money for their forthcoming trip to the European Championships in Vienna.  If anyone is sadistic enough to want to watch it, there’s even a vocal video of the hockey heroes being waxed, taken by the team manager.
And on the subject of creative endeavours, Yours Truly had a rare cultural outing to the opening night of an art exhibition in Dundee, courtesy of DD1’s artist friend Titi Finlay. A visit to New Orleans had inspired Titi to paint a series of works featuring musicians and people she saw on the street. As someone who was politely asked to leave the art class at the age of 14, having scored a mighty 52% in my exam, I am in awe of folk who can paint and draw well, and Titi is no exception. During the opening I snapped a couple of photos of her paintings, in between wolfing posh crisps, sumptuous sandwiches plus the mandatory orange juice.
Meanwhile in the depths of the polytunnel, the weeds have been sprouting merrily under the special plant fleece that HunterGatherer considerately placed over his newly seeded parsnips and leeks. He also draped it over Nellie the nectarine bush and Vinnie the Vine, both of whom have benefited from their snugly fleece cover during the recent cold spell (aka the past six months!).  This week we harvested our first fresh asparagus of the season, plus a couple of herbs. Now that FatCat has been effectively barred from the polytunnel by means of chicken wire at either end, the newly seeded plots are safely protected from his pesky paws.

The chicken wire has also proved useful when we let some of the ewes and lambs into the garden recently. It somehow seemed criminal that they were keenly awaiting the arrival of the spring grass in the paddock while we had plenty of the aforementioned forage growing on our lawn! If ovine lawnmowers have been deemed good enough for the community lawns in Paris, then we reckoned they are good enough for our garden, too!
To round the month off in style, we’d an unexpected visit from student DD2 last week, the poor soul having been pole-axed by a vindictive dose of mumps, perfectly timed – as was her glandular fever three years ago – to coincide with important summer exams. Yours Truly had forgotten just how debilitating mumps can be – not to mention the ‘mutant hamster lookalike’ effect that it has on the poor sufferer…
Daughter Dear was indeed a sorry sight, yet she and her grotesquely swollen glands had to crawl back through to Edinburgh Uni to attempt her summer exams, which apparently you must not miss unless you have a certificate in triplicate from the undertaker. Ironically the first paper was the listening component, which was far from ideal when the swelling below this particular music student’s ears meant her hearing was distinctly muffled. And having breathed in her grotty mumpy germs for several days, I’m currently keeping my fingers and toes firmly crossed that my own childhood dose of mumps means I’m immune – otherwise I may not be a very happy bunny (or even hamster) in two weeks’ time…
May 4, 2013Karen Elwis
Uncategorized124

How much chocolate indulgence can a girl survive...?
Words and woollies