Mini-photomontage: The Tracks on our Track in Winter 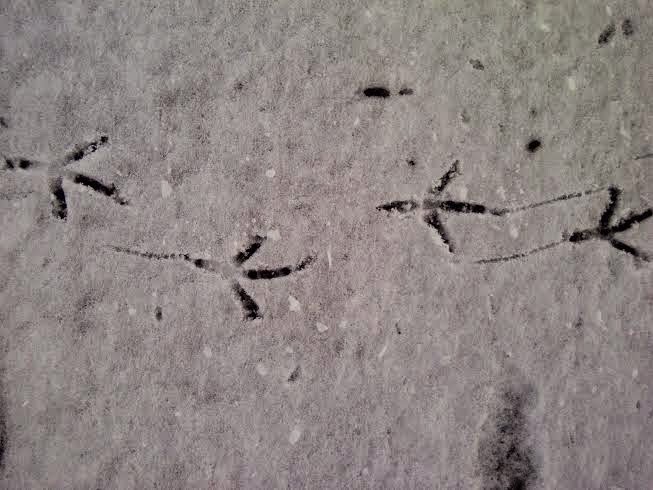 Provided I am well wrapped up, I adore winter, and even though our part of Kinross-shire hasn't been troubled by too much snow (yet...), even the faintest skiff of the white stuff is sufficient to transform our lovely rural surroundings into a winter wonderland characterised by sparkling hills, alpine trees and the distant silver loch.

One aspect of there being snow on the ground that particularly appeals to Yours Truly (in addition to skiing, building igloos and other such pursuits!) is that it's suddenly possible to find out about a whole world of activity that normally goes on unnoticed, namely the movements of myriad animals. So this morning I was out and about (any excuse to avoid work!), photographing the evidence...
8 years ago 2 Comments Flora & Fauna, Wildlife

The power of parental attachment in the bird world 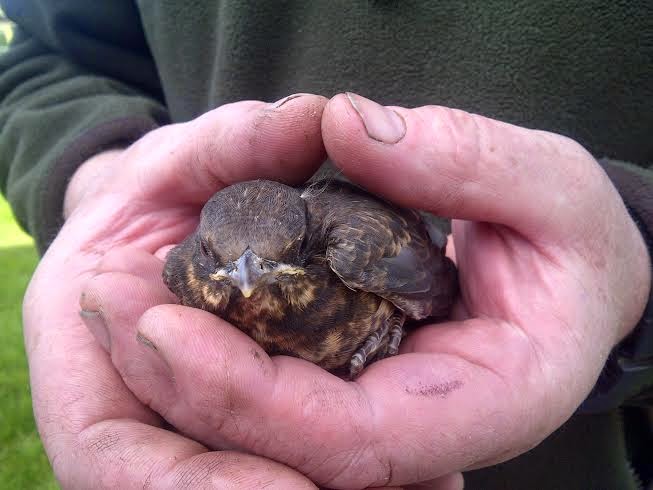 Do you ever get the feeling, when you're busy speaking to someone, that they're not quite focusing on what you're saying? Well, I had that distinct feeling yesterday evening when I was speaking to HunterGatherer upon his return from another long day at work in the farm workshop. As I prattled on, HG was gazing intently out the sitting-room window at the sheep paddock and then, before you could say "woolly jumpers", he was out the patio doors over the fence, flapping his arms and running through the long grass after something.

My first instinct was that he'd completely lost the plot; however, when I saw him then stoop down and scoop up a bird in his hands, I realised that there had indeed been method in his madness. His eagle eye – well honed from years of employment as a deer stalker on estates in the west coast of Scotland – had spotted a big black crow carrying off a baby thrush in its talons.

He'd been alerted to the incident because he'd seen Mummy and Daddy Thrush frantically pursuing the crow (which was easily twice their size) to and fro across the paddock, and then spotted that the crow was not empty-clawed.

Miraculously, the fledgling bird survived its ordeal. HG placed it in a clump of grass in the garden, from where it cheeped pathetically to its parents – who were still flying bravely at the, by now, extremely hacked-off crow, to deter it from returning for its intended Saturday evening supper.

The hunter-turned-bird-protector waited until he saw his new feathered friend flutter off back into the bushes and then returned to the sitting-room in search of his own Saturday night supper: steak and new potatoes served with home-grown broccoli and cauliflower from the Sparrowholding polytunnel. I suspect he fared rather better than his adversary, the crow... 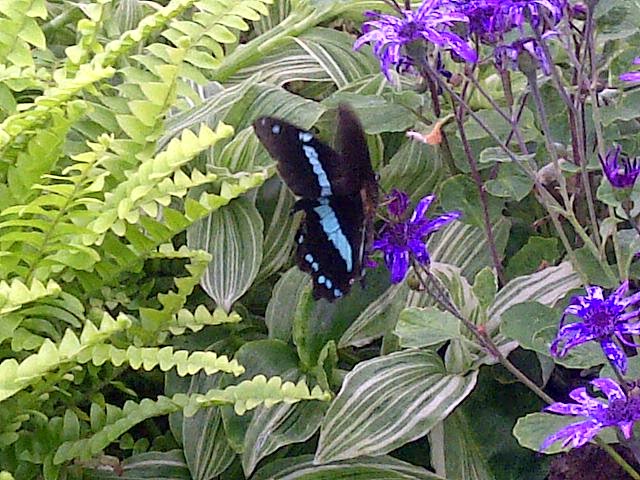 An email from Amazon Kindle dropped into my inbox this week, reminding me – politely but firmly – that it has been over 30 days (shock, horror…) since I put virtual pen to paper and penned an update from the Sparrowholding. Knuckles duly rapped, I rapidly tried to remember what has been happening in our lives during the past six weeks, which was no mean feat given the daily depleting capacity of Yours Truly's middle-aged grey cells.
However, a quick flick through the photos on my ubiquitous Blackberry proved to be a propitious starting point…. First there was a metaphorical feast of photos charting my annual pilgrimage with fellow foodie L. to Crail Food Festival.
Once we'd crossed "The Kingdom" and arrived on the outskirts of Crail, we left our car in the requisite car park (aka field) and strolled along the quaint, winding streets of this charming East Neuk fishing village, dropping in at various venues to admire the panoply of local produce.
As ever, there were tempting goodies on offer wherever we went: giant, squidgy TipsyMallows (or perhaps I should say "Mmmmmallows"); aromatic artisanal bread from Barnett’s Bakery; massive, melt-in-the-mouth meringues from Ardross Farm Shop; giant scones from Balgove Farm Shop; delicious dipping sauces from Trotter’s Independent Condiments; and dinky bottles of fruity vinegar from The Little Herb Farm.
Another local treat awaited us in the form of the fresh crab rolls for sale down at the harbour. We sat happily on a bench that overlooked the bobbing fishing boats, munching our rolls and chatting about everything and nothing. Idyllic. Or rather it was until the sight of a toddler tottering unfettered towards the edge of the precipitous harbour wall sent our maternal adrenaline levels into instant overdrive!
We rose, as one, to shout “stop him” and moved instinctively towards the wee toot, scared to sprint at him in case he panicked and overbalanced.
Meanwhile, his mother – who had apparently been engrossed in a particularly juicy exchange of gossip with some local pals – looked at us as if we were two middle-aged madwomen and ambled nonchalantly towards her offspring, who was still hovering precariously at the edge of the sheer drop.
At that point, L. and I had to leave the scene or we might well have said what was on our minds and become embroiled in a “parenting rage” argument. All we can hope is that she realises how close her wee boy came to a potentially fatal fall and invests soon in a set of toddler reins.
The next event of note recorded by my trusty mobile phone was our flying visit to Oxford, in mid-June, to help our exhausted elder daughter celebrate the end of her finals. The past four years have flown by unbelievably fast, and it was somehow rather sad to think of her bidding a fond farewell to St Something’s College, where she has forged such great friendships while relishing (if that's the right word!) the long hours of academic rigour.
However, daughter dear's studies are not yet over, for in September she hopes to begin a law conversion course at a new seat of learning in London, i.e. the exam stress looks set to continue for the foreseeable future...
True to the nature of the beast, DD1 had planned the parental micro-break down to the nth detail. Day 1 saw us punting on the River Cherwell (naturally, HunterGatherer was duly handed the unwieldy pole and told to get punting!) then later we tucked into an excellent supper at The Trout in nearby Wolvercote.
Much of Day 2 was devoted to Blenheim Palace, a local must-see which DD1 had been keen to visit for ages. The entrance fee of £60 for the car plus the three of us did rather make us gulp; however, in fairness, there was an abundance to see and do on the estate. We could probably have spent another full afternoon there and still not exhausted everything on offer, so the price wasn’t unreasonable as it transpired.
Blenheim's extensive grounds are immaculately maintained, and the palace itself is packed to the gunnels with curios and artifacts – indeed in some of the public rooms, it’s hard to see the wallpaper there are so many fabulous paintings or exhibits on show.
Together with DD1’s Uni friend G, we first boarded the charming little train that trundles its way across to the aptly named Pleasure Gardens. Having devoured our pre-purchased M&S sandwiches at one of the family picnic tables there, next we perused the display of antique farming tools and implements (taking plenty of photos for Farmpa!) before being seriously wowed by the incredibly attractive incumbents of the Butterfly Enclosure.

I spent the entire visit to the Butterfly House dreading that we’d tread on one of these delicate insects, as they were wont to land on the ground at one’s feet, having no respect even for HunterGatherer’s tackety boots!

Our subsequent tour of the Palace was fascinating – it transpires Winston Churchill was born in one of the Palace bedrooms, so a whole display was dedicated to his life and association with the Marlborough family home.
For me, personally, the most moving exhibits were letters written by Churchill to his father from school and from Sandhurst. It was obvious that the young Churchill was desperate for his dear ol' dad to come and see him, and that these much-longed-for visits didn’t happen very often.
In the evening, we returned to the scene of our punting exploits, this time to enjoy a delicious supper at Cherwell Boat House. Sadly this lovely meal marked the end of our break in the sunny south – it was time to exchange the beautifully manicured grounds and greenhouses of Blenheim for the unkempt lawn and predominantly weed-populated polytunnel here at The Sparrowholding. Still, I suppose it gives HunterGatherer something to aspire to… ;-)

PS: Just noticed that this is the 100th Square Sparrow blogpost, so many thanks to all followers of the blog for taking the time to read my ramblings. I'm currently contemplating moving the blog across to Wordpress for logistical reasons, but will let you know when the big move takes place!
Page 1 of 212»