Celebs, royalty and a rare sighting of HunterGatherer’s legs 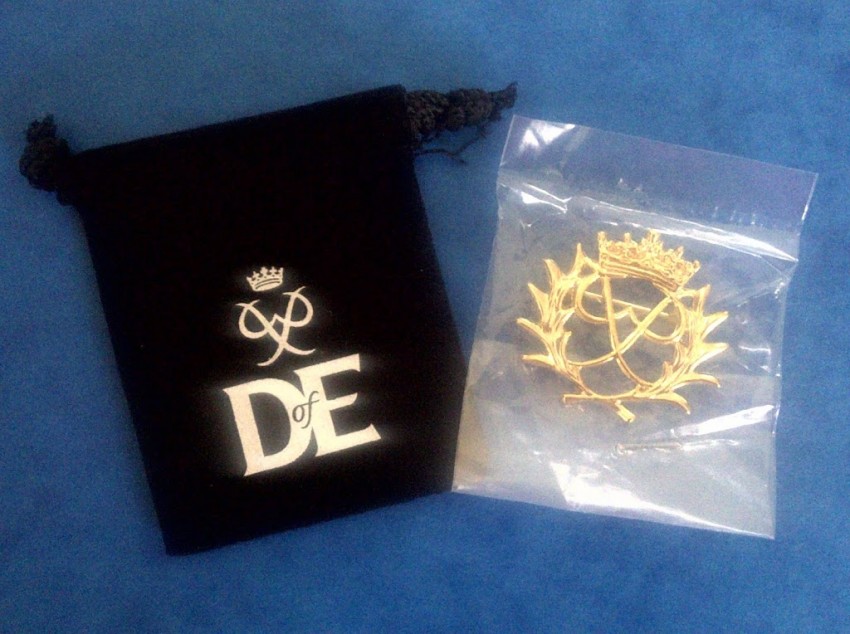 When an invite to attend DD2’s Gold Duke of Edinburgh Award presentation on 4th July at Holyrood Palace popped through the door a couple of months ago, the recipient wasn’t sure whether we could actually accept. Of course, after the many months of hard graft involved in actually achieving the award (including clambering across mountains carrying a rucksack that weighed as much as a baby elephant), she was keen to have her efforts acknowledged.
However, the delicate problem that stood in our way was that on the 4th of July, DD2 would already be down in Cambridge, back at the languages school where she worked last summer (for a refresher of the challenges of being in charge of a house full of uncooperative 14-17yr-old foreign pupils, read this post about last July’s experiences!). Fortunately, her employers proved immensely understanding, so after her shift on Wednesday morning, she was allowed to hop on a train up to Edinburgh, where we were to meet her for the big event on Thursday afternoon.
As HunterGatherer and I don’t get out to highfalutin social occasions very often, digging out our finery was a considerable challenge involving rigorous drawer raking and extreme wardrobe excavations. At last HG’s reclusive kilt jacket came to light, buried deep in the recesses of a cupboard, and he looked rather dashing in  his Highland attire. But the panic wasn’t over, as each of us required not just one but two forms of ID for entry to the palace: and for a frantic five minutes, we managed to lose track of all four sets amongst the mess caused by the manic kilt jacket search.
Next we had to deliver DD2’s frock to her friend’s flat in Edinburgh, then wait… and wait … and wait as she prettified herself. Meanwhile, the Royal cavalcade whisked by, which caused HG (never the most patient of parents) to become increasingly hot under the collar.  Eventually DD2 emerged from flat, looking suitably glam and we zipped back into Edinburgh, Holyrood-bound.
It may surprise you to learn that when you’re already running a little bit late for a royal appointment, there’s nothing like driving into the palace car park and discovering that your daughter has left both her forms of ID back at her friend’s flat… HG was by now not merely hot under the collar – steam was beginning to emerge from his ears. He and DD2 headed off in his wee Suzuki Jeep (not given to bursts of speed) back to the friend’s flat, while Yours Truly stood patiently in the long queue of parents, guardians and award holders snaking its way towards the gateway.
Eventually the three of us were reunited – with a few minutes to spare – in the grounds of the palace and made our way to Group 4’s muster area. Only then did we discover that Group 4’s allocated “celeb” for the day was none other than the far-from-unattractive former Scottish rugby captain Chris Paterson. That was the moment when DD2 knew for certain that her long train journey north had been worthwhile! Of course, Prince Edward was a nice enough chap, too, when he popped along to make polite conversation, but there was no doubt as to which of the two gentlemen concerned caused a bigger stir among all the young folk (not to mention a few of their mums…).
After all formalities had been completed and myriad photos snapped by the proud parents present, we were free to stroll around the grounds of the palace for a while. The atmospheric ruins were almost as impressive as the newer architecture – and certainly very photogenic. DD2 paused to pose with one of the palace guards for a photo, asked him to smile for the camera despite his frankly feeble protestation (as he fought manfully with his facial features – and lost) that he wasn’t allowed to smile on duty.
All in all, it was a jolly enjoyable afternoon, amply surpassing our (to be fair, quite limited!) original expectations.  The one thing that was missing was those dainty little crust-less cucumber sandwiches for which royal occasions are so famed. In fact, I can confirm that there wasn’t a bally thing to eat or drink during the whole afternoon. Fortunately, we were able rectify the balance during the ensuing evening in Edinburgh with a slap-up supper at an eatery on George IV Bridge.  We really must try to get out more often!
Jul 5, 2013Karen Elwis
Uncategorized102

Square Sparrow Flies to the Land of Piaf
Why go away when there's so much to enjoy at home?