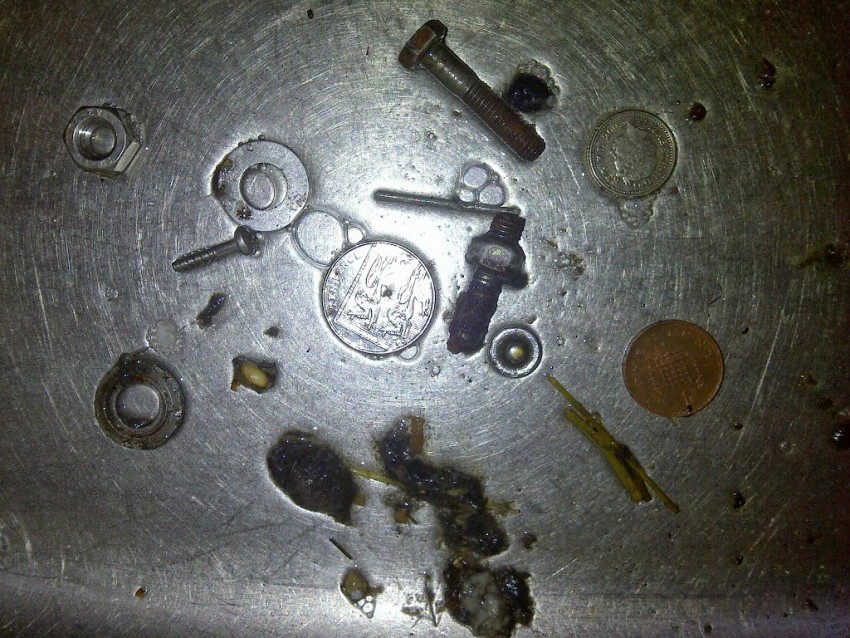 Not being an avid TV watcher, I’ve never seen the programme “Desperate Housewives”,  and  I suspect from anything I’ve read in the press about the said series that my current plight doesn’t quite register on the same scale as these ladies’ desperation.

However, I am nonetheless a desperate housewife of sorts this afternoon, and the reason for my despair is the health and wellbeing of my long-suffering tumble dryer – not to mention my weary washing machine. Why, you might ask?  Well, just take a look at the photo which I snapped this morning of the muck, stour (*) and metallic objects that had accumulated in my stalwart dryer’s filter.
*stour is a Scottish word meaning “dust”

Needless to say, I didn’t need to search too far for the culprit in a household that comprises one student (who seems to spend most of the day in bed when he’s not at College or playing hockey, and whose only washing is thus mainly comprised of soaking hockey socks and a motley selection of sweatshirts); one editor (whose  most heinous laundry sins tend to involve red ink stains); and one agricultural worker who gets up close and personal with muck and stour on a daily basis. Yes, no prizes for guessing that HunterGatherer is guilty as charged!

Now, of course, I am extremely grateful that he is considerate enough to put his own working clothes in the washing machine as he sheds them (not least because, in all honesty, I wouldn’t want to touch them with a barge pole!). However, it would be even better if he remembered (as he has been asked to do at least six million times during the 23 years of our marriage) to remove all foreign objects from the pockets first…
For some reason, at least five million of those times he has managed to forget this apparently simple request, with the result that reading glasses, penknives, spanners and myriad other intruders regularly sneak into our wash cycles, either to emerge pristine on the other side or to lodge themselves somewhere in innards of the unsuspecting machine. If their presence is not detected in time (loud thumps usually give the spanners away pretty early on…) then they can even make it as far as the tumbler dryer – hence this morning’s “rich pickings” (see photo above).
I have resolved that if, at some future date, I were ever to win the lottery (not that we actually buy tickets, so the chances are pretty slim!), I would not be even remotely tempted by a snazzy Porsche or a three-month world cruise. Instead, I would cast financial caution to the wind and splash out on an industrial-strength washing machine and tumble dryer that could swallow entire toolboxes – and perhaps even the odd sheep – whole, without batting an eyelid.
Still on the subject of things domestic, I’m pleased to report that the culinary offerings at the Sparrowholding have soared in quality and variety this past week following the return of DD1 from her summer internship activities at the legal eagle company. Always a keen cook, she is a breath of fresh air in our kitchen, and in recent days we have breakfasted on oeufs Bénédicte (with the Hollandaise sauce made from first principles, bien sûr…) and dined on chicken and leek pie, fish medley pie, and courgette gratin (with courgettes from the polytunnel).
As I seem to remember writing in a blogpost around this time last year, it’s probably just as well that in 10 days or so, the resident chef will be heading back to Uni, or I’d very likely be resembling the Michelin(-starred) woman by Christmas!
Mention of the “C” word reminds me that the other evening HunterGatherer was poring over the first Christmas catalogue to venture through our letterbox, and he was astounded to note that you can now buy a plastic snowball maker mould. Makes you wonder how on earth we managed to manufacture our icy ammunition in the good old days?!
Sep 22, 2013Karen Elwis
Uncategorized99

And suddenly it was September...
Why nothing goes to waste on Swiss farms