Eccentrics make the world go round 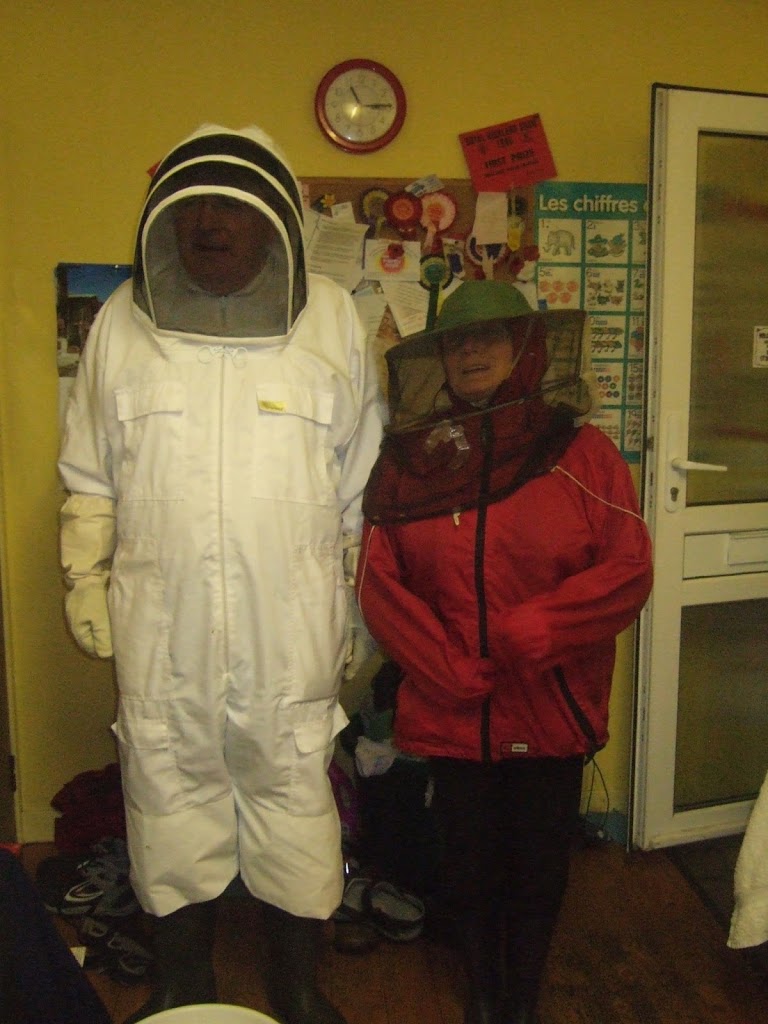 I probably appear fairly eccentric to a lot of folk: I don’t smoke, I don’t drink alcohol, and I usually only swear when someone whacks me in the shins with a hockey stick. Only on the most special of special occasions do I wear make-up or don any form of finery: I am at my happiest in comfy leggings and a pair of (even in the summer) hippopotamusly muddy wellies. [NB: Spellcheck changed that last word automatically to “willies”, but luckily I spotted it in time! Although maybe it cleverly predicted my meeting with The Naked Rambler later in this post…]
Looking at my parents, it was evident that I was destined not to fall readily into any particular stereotype.  My mum (aka Supergran) was playing still tennis with (and beating!) teenage lads in the village till she was well into her 60s.  Sadly her tennis playing came to a premature halt after she broke both wrists simultaneously in a spectacular fall involving a camera, some children, and a dog chain turned tripwire – but that’s another story…). Supergran once walked round a Farming of Yesteryear Show at Glamis Castle for an entire afternoon wearing two completely different coloured shoes, having been so busy speaking to all and sundry that she didn’t have time to look down at her feet until she returned to the car several hours later and went to change into her driving shoes.
Meanwhile, my dad (aka Farmpa) is regularly to be overheard telling anyone in the vicinity: “I’m nearly 80 you know”. But that doesn’t stop him being out on the land first thing every day, and often he doesn’t come back in for his lunch until the middle of the afternoon, having been caught up chasing runaway cattle or filling potholes in the road.  He can only very occasionally be prised away from the farm – and that’s usually to attend a farm sale or to pick up spare parts for some malfunctioning machine or other.   Farming is, quite literally, his life.
My parents’ non-conventional behaviour was perhaps most evident a couple of years ago when they decided to deliver a (full) hive of bees to the Sparrowholding . I did express concern about the wisdom of this operation, given that it involved a 40-minute drive up the M90 in the dark, but my worries were brushed aside and I was assured that adequate precautions would be taken.  And they certainly were.  In the picture below, you’ll see the gung-ho duo of hive removal men who arrived that evening, complete with one  hive, complete with  30 thousand bees (give or take a few) in the back of the Landover.  You’d think that given their great age, the pair of them would have learned to “bee” sensible by now… 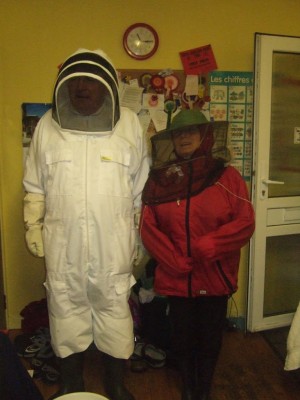 Mark you, even their eccentricity pales into sorry insignificance when compared with someone whom I encountered today in a nearby village.  There I was, sitting in my car slurping an amazing ice cream from the local Italian supermarket when an approaching figure caught my eye. He was wearing a broad-brimmed bush hat, a rucksack and hiking boots – and nothing else. For the figure plodding along the pavement was none other than the Naked Rambler, naturist Stephen Gough, recently released from Perth Prison after six years of incarceration for insisting on walking in public without his clothes. 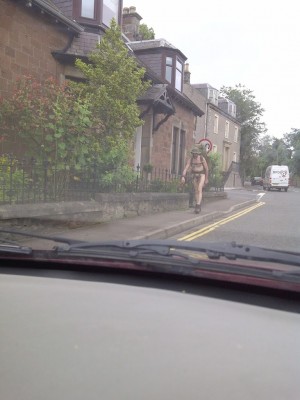 Blending naturally into the scenery
Being an inquisitive journalistic sort, I hopped out of the car and walked alongside him for a few strides, to ask him where he was headed. Quick as a flash (perhaps an unfortunate analogy, but you know what I mean!), the UK’s most renowned rambler produced a brand new OS map, which he opened partially to point out his planned route. By some strange coincidence, it went straight through Kinross, out into the countryside for a couple of miles and right past the end of our road.  On a sudden impulse I said: “Would you like a cup of tea when you pass by?”  His eyes immediately lit up and he said, “Actually, yes, that would be great. I’ve grown used to the taste of water, but tea would be really good.” We rapidly ascertained that he didn’t have a mobile phone to let me know when he’d be passing (“Er, I did have, but the battery went flat while I was in prison for six years…” Of course, it did – idiot that I am!).
So I returned home, filled a flask with some tea (milk, with no sugar, as I’d had the presence of mind to ascertain during our briefest of chats) and drove back to find him already out of Kinross and heading south.  On impulse, I had also popped a couple of cupcakes in a plastic bag, not being quite sure about the Ps and Qs of food acquisition when you’re wandering naked along the highways and byways of Britain. When I handed my paltry pickings over, he seemed genuinely grateful, but was obviously keen to get going – and as I’d noticed a police car lurking round a corner not far away, I didn’t blame him.  His final destination, Bournemouth, is a dauntingly long way from rural Kinross-shire, so I wished him well for his journey and returned home. As I drove, I pondered a society in which violent robbers and gangsters often seem to be able to avoid the long arm of the law and operate with impunity, while a comparatively harmless eccentric can spend six years banged up in a Perthshire prison. It’s a funny old world, although possibly not quite so funny when you consider the huge amount of tax-payers’ hard-earned money that has been consumed footing the bill for his extended prison stays…
Jul 20, 2012Karen Elwis
Uncategorized88

Puddings, ponies, packages and potatoes
A gold medal and a golden wedding aniversary