Festive bleatings from the Sparrowholding in Scotland 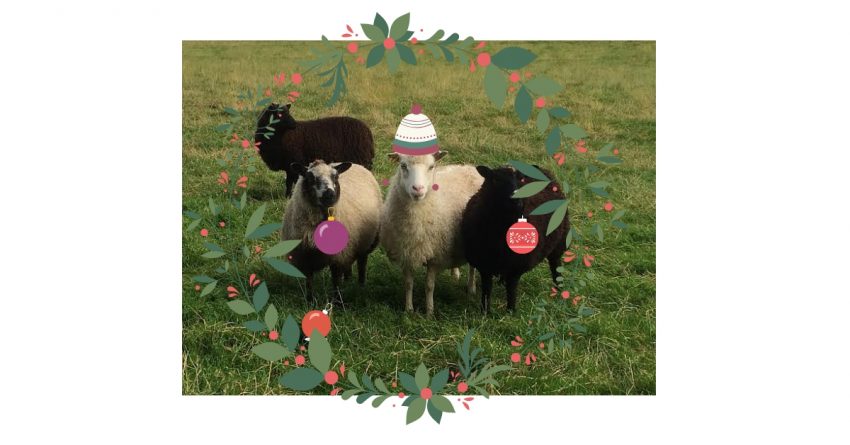 ‘Surely it’s not that time of year again?’ I hear you cry – and I can only concur. In the halcyon days (daze?) of my youth, my dear old mum regularly warned me that each year would fly past faster as I aged matured. Only now do I realise that I should have listened to her … because had I heeded those pearly words of wisdom, I wouldn’t be sitting at some ungodly hour attempting to pen the annual update – so squeakily close to Christmas that even now I’m bracing myself for the whoosh as Santa’s reindeer storm past. Come to think of it, I may not be alone in the family in having issues with the passage of time, given that Farmpa distinguished himself this year by not only dropping his watch down the toilet but then also flushing it for good measure …

To gird myself for the exhausting task of documenting a selection of Elwisian escapades from 2018, I needed to boost my energy levels in the wee sma’ hours, which naturally involved ‘dipping into’ the fudge supplies originally destined for the offspring’s stockings on Christmas morn. However, as I see it, I’m taking one (OK, possibly more than one …) for the team – I mean, just think of the favour I’m doing their teeth and waistlines! Of course they will must never know about this selfless service I’ve done them, so I won’t even receive a modicum of gratitude for my significant sugary sacrifice.

February 2018 saw an avalanche of family members – including all three Elwis offspring plus their gamest of grandparents, SuperGran and Farmpa – descend on the unsuspecting Coylumbridge Resort in Aviemore to recreate our school mid-term weekend ski breaks of over a decade ago. But gone were the days when HunterGatherer and I would lead our trio of compliant snow-ploughers down the slippery slopes. This time, upon disembarking from the chairlift, we barely had a chance to re-assemble our middle-aged limbs and point them vaguely in the right direction before the gleesome threesome zoomed off down the piste, leaving a pair of pathetic parents trailing in their powdery wake. With the fearless five busy carving up Cairngorm, the golden oldies enjoyed pootling around the Highland countryside until the seven of us reconvened for dinner – some of us having rediscovered muscles we’d forgotten we even had. After three fabby days together en famille, we left Aviemore standing (just) but took many magical memories (and bruises) back home with us.

February 2018 saw an avalanche of family members – including all three Elwis offspring plus their gamest of grandparents, SuperGran and Farmpa – descend on the unsuspecting Coylumbridge Resort in Aviemore to recreate our school mid-term weekend ski breaks of over a decade ago. But gone were the days when HunterGatherer and I would lead our trio of compliant snow-ploughers down the slippery slopes. This time, upon disembarking from the chairlift, we barely had a chance to re-assemble our middle-aged limbs and point them vaguely in the right direction before the gleesome threesome zoomed off down the piste, leaving a pair of pathetic parents trailing in their powdery wake. With the fearless five busy carving up Cairngorm, the golden oldies enjoyed pootling around the Highland countryside until the seven of us reconvened for dinner – some of us having rediscovered muscles we’d forgotten we even had. After three fabby days together en famille, we left Aviemore standing (just) but took many magical memories (and bruises) back home with us. 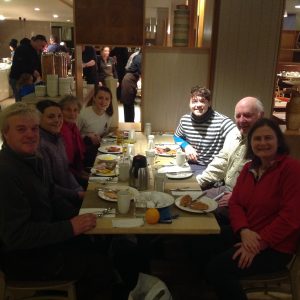 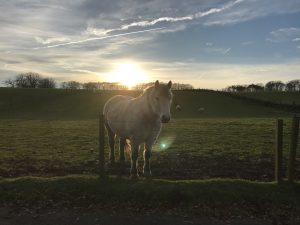 Other than the aforementioned family weekend in the frozen north, sightings of the daughterly duo were relatively rare this year, as both continued to eschew the ‘delights’ of Scotland in favour of the ‘bright lights’ of London. DD1 (27) remains entombed in the office of a city law firm for most of her waking – not to mention sleeping – hours, very occasionally emerging to buy a new handbag (which is about the only type of shop they don’t have in the planet-sized building where she works – no doubt a cunning plan to prevent staff from having any reason to leave the building at all …). Fortunately, she does have a genuine excuse to escape back to her flat occasionally, in the form of the new love of her life: an enormous Chartreux (breed not colour, I’m assured) kitten called Oberon [King of the Fairies, for anyone not acquainted with Midsummer Night’s Dream]. His arrival will hopefully prevent the re-occurrence of ‘Pigeongate’ – a major avian incident which unfolded on the tiny balcony of DD1’s flat this spring, when a couple of amorous pigeons tried to set up a precarious home under her deckchair. Given the plethora of pigeon poo accumulating daily outside her French window, spring was a stressful time for DD1, so she is hopeful that the presence of a panther-like prowler behind the patio door will ensure the plucky pigeon lovers choose someone else’s balcony in 2019!

Having always aspired to be a mover and a shaker, DD2 (25) somehow managed to end up in a tree house in a yoga camp in Bali when the earthquakes kicked off this summer, which led to a rather surreal telephone conversation between father and daughter, involving him instructing her to conceal herself under a table. She was also appointed Oberon’s godmother when her big sis’ was abroad. However, the King of the Fairies proved to be more King of the Jungle, evidently viewing DD2’s flat as a giant adventure playground, and the casualty list to date comprises one vase, one clothes line and (most tragic of all) one bobble hat… Not to mention the Saturday morning when kitty’s extremely disgruntled godmother was rudely awoken at 7 a.m. (having got in at 4 a.m. …) by having a full glass of water knocked over her face. To say we are looking forward to the said Oberon’s stayCATion with us at Xmas would be an overstatement. DD2 still spends much of her working life doing what many could only dream of: being paid to sit around and watch TV/listen to music all day. This year, she’s been entrusted with the terrifying task of speaking at conferences (although fortunately, the benefit of being in such a niche industry is that no one knows what she’s talking about anyway – as usual!). A couple of times a week, to ensure that her long-inactive legs still function, she swaps her headphones for a hockey stick, and charges around sporting the colours of Westminster and Hampstead Ladies. This year has seen her on her best behaviour, with not a card in sight [unlike a certain other hockey-playing family member, of which more anon …].

Son&Heir (23) spent most of 2018 running his own personal training business, often at dawn or dusk on the shores of Loch Leven. As his eager clients kept coming back for more, one can only assume they were so distracted by the beauty of the loch that they didn’t notice how exhausted they were after myriad gruelling guerrilla fitness circuits! In January, he is embarking on an exciting new career path when he heads off to Edinburgh to take up a post as a tech resourcer with a recruitment company. After enduring a year of the purgatory of the parental home, he moved out and rented a house this summer, although he still pops home regularly (bearing washing), so I know he loves us really … Of course, there is a story behind the washing, but I couldn’t possibly reveal it for fear of embarrassing him. Or perhaps, in the spirit of Christmas candour, I could … When viewing his new residence, Son&Heir failed to notice that there was no plumbing for a washing machine. In fact, it transpired he wasn’t even aware that washing machines required plumbing, so he simply plugged it in at the electric socket and waited for it to start filling. He’s still waiting … 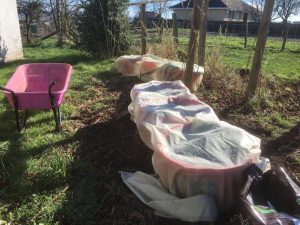 Strawberry plants and veggies growing in tubs in spring

Man of the soil HunterGatherer continues to be (in his own words) ‘a digger of dirt’ for approximately half the year and a clipboard-toting inspector of agricultural spreaders and sprayers the rest of the time. Upon his return from work each evening, he heads straight to speak to the only other residents of our smallholding capable of engaging in any semblance of sensible conversation – the Shetland sheep. In fact, Yours Truly now plays second fiddle not only to a flock of woolly women but also to a feline femme fatale … For if any of you worried for one moment that we might suffer from empty-nest syndrome once all three chicks were ensconced in other nests, rest assured that they were easily replaced in our affections by ‘Minerva’ from Sunny Harbour Cat Rescue in Fife.

The summer months of 2018 also saw HunterGatherer participating in a spot of Munro-bagging with a couple of former hockey teammates. He suspects that one of the said gentlemen must have been a particularly vicious army PT instructor in a former life, as this self-styled commandant led his ‘troops’ (all two of them) on some pretty arduous day trips – including one that involved cycling 12 kms each way on a rough and rocky track, plus the small matter of shinning up two Munros in-between. 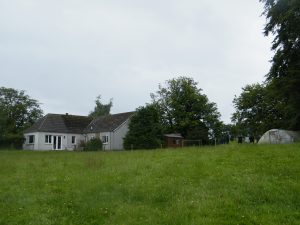 Although it was actually a plethora of urgent proofreading tasks that conspired to make Yours Truly’s festive preparations fall significantly behind schedule this year, much of 2018 has been devoted to tutoring eager teenagers in the finer points of English language and literature. When not spouting forth about the niceties of Norman MacCaig’s enjambment, I had (until a nasty, lingering knee injury stopped play two months ago) been enjoying plenty of (occasionally over-) enthusiastic hockey activity. Indeed earlier in the year, I earned the dubious honour of being awarded first a green and then a yellow card by an ‘outrageously unjust’ umpire [and yes, I told him so – that was what resulted in the second card …]. I’ve decided that this season is to be my last playing competitive hockey – there are only so many bashes one’s body can take, and the fact that I’m currently awaiting two orthopaedic appointments is probably ‘a sign’. Another ‘sign’ is without doubt the number of Saga and funeral-plan leaflets that arrive unbidden through our letterbox these days! And the final deciding factor was a sudden issue with my one ‘good’ eye. During a recent trip to the optician, he told me, “You have a vice ring.” At least I thought that’s what he said – apparently he was talking about a ‘Weiss ring’ (an ophthalmological phenomenon rather than a drug cartel, which was a relief). Either way, playing contact sports is probably best avoided henceforth, so I plan to seek a substitute ‘softer’ sport. Watch this space!

Meanwhile, as tinsel is getting tangled and mince pies are being munched all over the country, we prepare to bid farewell to 2018. This Christmas epistle comes to you all with very best wishes from HunterGatherer and Square Sparrow for a wonderful festive period, and a healthy and happy new year to follow in 2019! 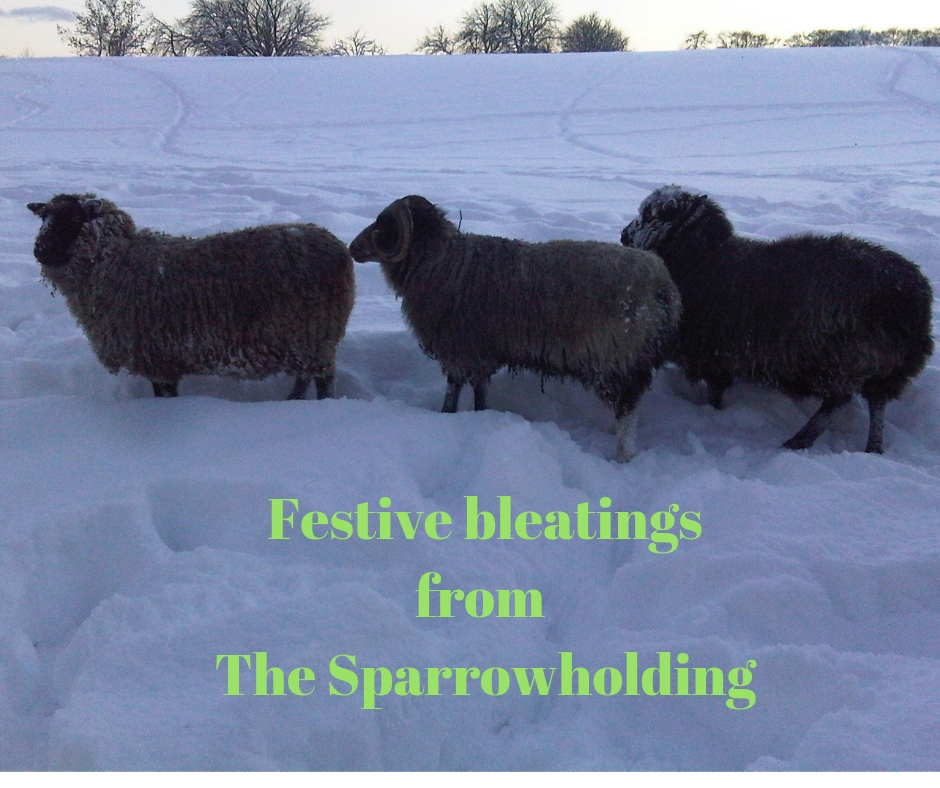 Lambing, tubs and other signs of spring in Scotland