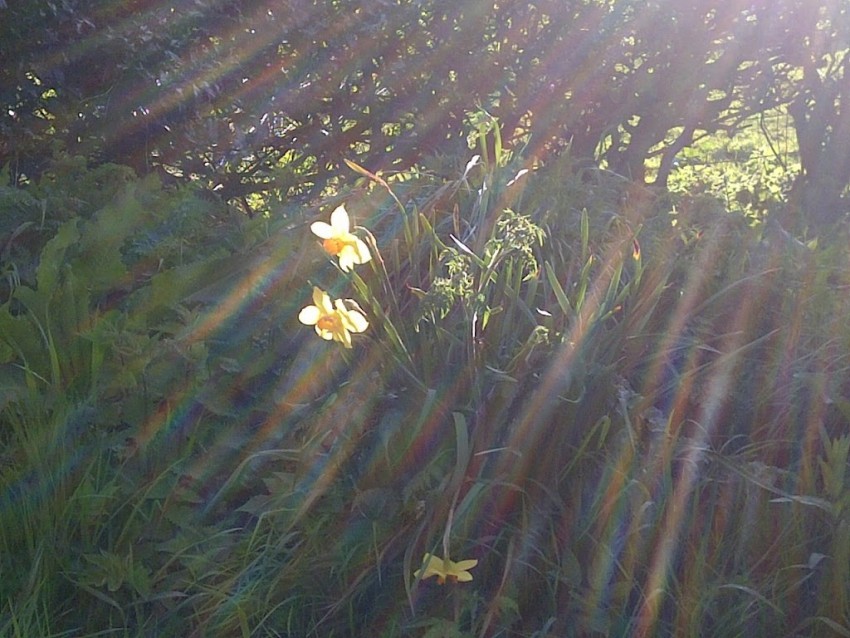 It’s the yellow time of year again – I wish I was referring to that glorious golden sphere that occasionally deigns to grace the skies above, but I’m actually referring to the local flora. For just as the daffodils are finally fading, an army of dandelion plants and gorse bushes have sprung into action along the verges and hedgerows of rural central Scotland. And soon, no doubt, the fields of oilseed rape (think Summer Harvest Oils!) will be bursting into flower, too – adding yet more yellow to the scenery. If all this were not sufficient, we even have a yellow house next door to us (which happens to be for sale at the moment, if anyone fancies a move to this lovely part of the world – the neighbours are, it goes without saying, exceptionally nice…).
In other news, eager to boost the extremely modest weight loss achieved to date by following the 5:2 diet, Yours Truly has been going swimming (not a favourite pastime, but desperation is a hard taskmaster!) and even out for the odd (very odd if you saw my running action…) jog. One benefit of such sorties is the chance to admire, at close quarters, the stunning area in which we live – as you’ll see from the photos below, not all of it is yellow!
Further opportunities to admire the scenery have taken the form of “revision” walks, during which I have been accompanied by Son+Heir on his skateboard. It being exam time and said student’s ADD meaning that he finds it easier to study while moving, this is about the only way any meaningful revision can be achieved. So the neighbours have become familiar with the sight of grumpy mum clutching revision guide and simmering son practising “skateboard skills” while trying to recall quotes and themes from various Scottish contemporary plays. During this dramatic process, Yours Truly is not allowed to put even the faintest hint of “expression” into her cues (heaven forfend), yet if they are read too monotonously, that is not acceptable either… The skies of Kinross-shire have certainly been blue on a few evenings of late (metaphorically, if not literally).
A welcome escape from stresses on the filial front came in the form of an invitation to have supper at a good friend’s house along with a mutual friend of ours who is just back from three years in the Far East. There was, of course, a serious amount of catching up to be done, but I don’t think any of us had appreciated just quite how much… Suffice to say, the three of us began talking at 7.30p.m. on the Wednesday and only stopped when I received a text on my phone – it was from Son+Heir enquiring “are you OK”?  Only then did we realise that it was 3.30a.m. on Thursday. We had talked for almost eight hours non-stop, and by the time I reached home the dawn was just beginning to break. But oh, the irony of having a teenager check up on our well-being. It proved to us beyond doubt that there’s life in us middle-aged mums yet!
May 30, 2013Karen Elwis
Uncategorized110

Words and woollies
A weekend of food, glorious food in Fife's East Neuk