Full steam ahead at the Miele Calorie Neutral lunch 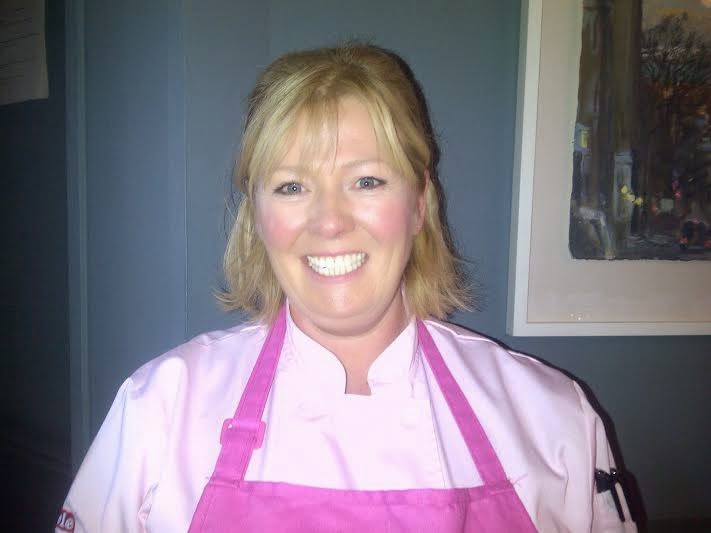 I can honestly say that Miele’s recent “Steam!” lunch, held at the Mark Greenaway restaurant on North Castle Street in Edinburgh was a unique and fabulous occasion, which will linger on in my memory long after other luncheons have faded from mind.
“So what was so special about it?” I hear you ask.
Where should I begin? Possibly at the very beginning would be a propitious starting point, as Maria from the Sound of Music once very sensibly opined.
The luncheon had been billed on Twitter as a calorie neutral event, an attribute which immediately caught my attention. According to the email invitation sent out by Miele, prior to eating, guests would participate in a Bodybalance™ class.
Having played a couple of hours of hockey the previous day, Yours Truly was slightly concerned that her ability to undertake any sort of physical challenge might have been seriously compromised. However, fortunately our personal trainer – the gentle Jonathon from Total Health in Edinburgh – did not demand too much of the nine slightly unlikely members of his pre-prandial fitness session.
He led us patiently through a series of stretching and “full body” exercises that we all did our utmost to implement. And when one of the floor exercises placed the skirt-clad member of our group of gastronomes in a slightly delicate position, the chivalrous Jonathon immediately offered her his jacket to protect her knees’ modesty.
Twenty minutes later, our class was complete, and the relevant number of calories had been duly burned. Next it was time for a cup of restorative green tea – which, we were informed, has the felicitous effect of encouraging fat burning (whereupon Yours Truly made an immediate note to buy some on her next foray to the local supermarket).
Sitting around the table sipping said tea provided a perfect opportunity to find out a bit about some of my fellow diners, who proved to be excellent company. On my right was a mature lady who, along with her husband, had recently retired to Highland Perthshire and who had become (just one week previously) the proud owner of a steam oven, but had not yet given it a “test drive”. The Steam! lunch was a perfect chance for her to see it being put through its paces.
On my left were a fellow writer – the food editor of Art Mag Edinburgh (always a pleasure to meet other freelance foodies, and we even discovered we’d attended the same school!) – plus two younger and, as it transpired, highly intriguing table-mates. One was a young lady with a degree in biological science and management from Edinburgh University who is currently training to be a joiner because she’s found she loves working with wood; the other was a young man with the most spectacular moustache that I believe I have ever seen at close quarters. He is currently the model fronting the PR campaign for Dick Winters men’s underwear. As you might imagine, conversation at our side of the table was certainly anything but dull…
Being a gregarious person by nature, I have to confess that I was in my element all afternoon, and meeting such fascinating people added significantly to my enjoyment of the whole event!

Soon our hostesses began to talk us through the first of the five courses that awaited our avid foodie attentions. Our chef for the day was internationally acclaimed Jacqueline O’Donnell, one of the dynamic sororial duo behind The Sisters Restaurant in Glasgow. Jak’s able assistant for the day was Alex from Miele – the company whose steam ovens had the weighty responsibility of cooking our calorie neutral meal!
Eagerly, we devoured the paper menu on the table with our eyes, and we liked what we saw…
Could it really be possible that we could tuck into such an apparently indulgent menu and still leave the table with impunity, safe in the knowledge that our initial Bodybalance™  session and green tea had accounted for every single calorie we were about to ingest? If having most of the impending meal steamed meant that we could, we were certainly game to try!
To say that the entire meal served to us at the Edinburgh Steam! event was utterly superb would scarcely be to do it full justice. The broccoli was impeccably steamed to ensure a perfect ‘bite’ and remained the same deep emerald green as it no doubt was when first plucked from a local farmer’s field.

Sprinkled on top was a scattering of small, seductive chunks of cured salmon (which Jak explained she had wrapped in a mixture of sea salt, sugar, dill and lemon zest and left overnight in the fridge); meanwhile, the accompanying dressing (comprising white wine vinegar, rapeseed oil and micro cress, if my memory serves me well) complemented both broccoli and salmon to perfection.
Next on the menu was a dish involving one of my favourite veggies: the humble red beetroot. Steamed in the futuristic, tardis-like oven and served with broad beans and puy lentils, this course totalled a mere 80 calories. Sweet music to a gourmand’s ears…

Two dishes down, and it was time for our fish and meat courses, both of which raised the already high standard set by the previous courses. I can’t remember to my shame exactly how Jak said she made the stuffing for the lemon sole, but two things I do know: it contained prawns; and it reminded me why I should eat fish more often. Anyone who thinks that steamed meat and fish has to be bland should think again. The flavour of this fish was sublime.
As a huge fan of venison, I was delighted to hear Jak announce that whereas an 8oz fillet steak contains – on average – 26 g of fat, a similar amount of venison contains a mere 3g. The only slight downside, she added, of cooking meat in a steam oven can be the colour – but, of course, there are ways round this.
She showed us how to drop a smidgen of rapeseed oil (from a special ‘dropper’ container that prevented too much oil escaping at once!) on to each steamed venison fillet, rub it into the surface of the meat and then sear the meat, briefly, in a frying pan – just long enough to give it the colour and crispness that so enhances both appearance and flavour.
The fillets were swiftly removed from the pan, their place being taken by a blend of Scottish Brambles with a dash of balsamic vinegar and a smidgen of sugar. This mixture was cooked rapidly before being spooned over the meat. Re-sult!

Unbelievably, we had by now worked our way through four of our allotted five courses, watching attentively as each was prepared and cooked – or rather steamed – before our very eyes, while hearing from Alex and Jak about the myriad dishes that can successfully be cooked in Miele’s innovative steam ovens.
Dessert proved to be yet another delight for our taste buds – belying its apparent simplicity. The combo of steamed rhubarb and pineapple might have appeared an unlikely pairing, but it worked an absolute treat (perhaps the dash of rum helped!). Serving it with a scoop of coconut ice cream was also an inspired notion.

This truly was rhubarb as you’ve never tasted it before: devoid of its customary sugar-steeped ‘bath’ yet still extremely pleasant on the palate. The flavours of the two fruits melded into one glorious burst of lusciousness, and by the time the last drop of fruit-infused coconut cream had been scraped from the plate, we were all perfectly replete.
It is no exaggeration to say that this was one of the finest meals that I’ve ever had the privilege of being served in a restaurant. Moreover, the pleasure of watching it take shape before my very eyes enhanced the experience significantly.

The day’s only disappointment was that a steam oven’s price puts it slightly (all right, more than slightly…) out of my league for the moment. However, if I ever win the lottery, all that will change. And if you’d like a chance to win one of the ovens, tweet your favourite meal cooked with a Miele steamer using the hashtag #mielesteam. Good luck!
Nov 28, 2014Karen Elwis
Food & Drink124

The Miele steam train is coming to town…
Romance is in the air at the Sparrowholding...