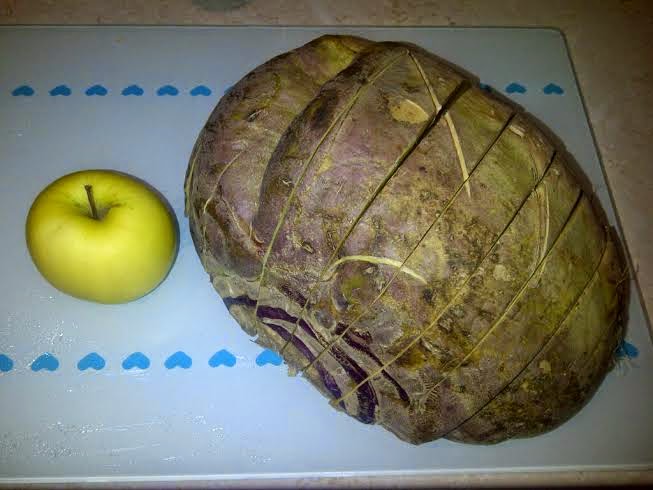 I popped in to visit Supergran and Farmpa earlier this month and spotted this monstrous turnip in their kitchen. Bear in mind, as you behold the above photo, that this is only half of the original specimen, which must truly have been a giant among brassicas… My reason for calling was to see how Supergran was recovering from a fall that she had sustained the week previously while on a power walking mission – in her wellies – to cut a few barley heads from a nearby field (for reasons that will later become apparent).

Unsurprisingly, the collision between her fragile septuagenarian knee and the unforgiving tarmac of the farm road saw the aspiring harvester end up in our local in A&E department. Ten stitches and numerous Steristrips later, she was discharged from hospital, bruised and still shocked. One might have expected, therefore, that she would then take things a little easier in the days that followed – at least until her stitches were removed. However, that was perhaps a rather fond hope, given the unpredictable forces that prevail when you live on a farm…

When I arrived in the pitch dark, having driven through torrential rain, it was to find the parental pair (aged 77 and 81 respectively) readying themselves to head out into the soggy blackness in pursuit of some escapee sheep.

A phone call from Farmerbruv had alerted them to the fact that some of the ewes which had arrived at the farm for overwintering the day before had decided that the lure of their own hillside was too strong, and a renegade group of them had sniffed out a weak spot in the fencing.

When I ventured to suggest that perhaps chasing sheep in the dead of night, by torchlight, wasn’t a wise pursuit for two elderly folk, especially when one of them has 10 stitches in their leg, Supergran’s answer did nothing to reassure me: “Oh, but it was fine last night when we were out chasing the other lot that escaped, as I just carried the torch in one hand and held a stick to stop me falling over in the other.”

For some strange reason, her words – apparently intended to put me at my ease – did not have the desired effect…

But back to the reason for my intrepid mother’s original failed mission to the field, which had been to source a few heads of barley in order to observe an ancient country custom: making a “corn dolly”.

Apparently, this pagan custom (and no, Supergran isn’t a pagan – she just enjoys country traditions!) goes back gazillions of years, and the basic idea was that when the corn field was being harvested, this process drove the corn spirits who lived there out of their home. So to appease them, the farmer would save some heads of corn from the last field to be cut during each harvest and keep them safe until the following spring. During the intervening months, the corn spirits lived in the farmer’s home, presumably in the corn dolly.

After winter, the “dolly” was then ploughed into the first furrow of earth to be turned on the farm in the new growing season, allowing the corn spirits to return to their home. Evidently, the said corn spirits weren’t feeling too charitable the day they stood by and watched Supergran sprawled on the road, as they didn’t have the good grace to help her up again.

She’s since been along to the field and cut a few stalks of corn, which she then popped in a vase as an impromptu floral arrangement – and that is as near to a corn dolly as the blessed spirits are going to get this year!

However, the real die-hard corn dolly creators do some amazingly impressive things with their handful of barley heads. Just have a look at the fantastic corn dollies in the pictures below and you’ll see what I mean!

Here on the Sparrowholding, the sheep are evidently just as wayward as at the ones back at Home Farm. This week, Yours Truly had to corner the two black sheep (how ironic!) in the photo below and encourage them back through a tiny hole in the fence – a process which involved the rather unfit shepherdess expending vast quantities of both nervous and physical energy. I’m rather hoping that none of the neighbours were out in their gardens listening at the time…

Since I last blogged, we’ve harvested our remaining grapes and, as I mentioned in the previous post, we rue the day we opted for whatever breed of vine Vinnie happens to be. Most of the grapes he produces are tiny, and each of them contains one or two pips, which makes eating them frustrating and time-consuming in equal measure.

Mark you, all the hard work does pay off if you turn them into a luscious fruity dessert… Just place the de-seeded, halved grapes in an overproof dish, add a tablespoon of sherry and leave for a few hours. Then top the grapes with whipped cream and demerara sugar, place under the grill for a few minutes till the sugar forms a crust and serve immediately. Recipe for a simple but yummy pud!

Meanwhile, autumn continues to paint the nearby hedgerows a rainbow of orange, gold, red and yellow. Here’s a quick photographic overview of the beauty of our surroundings at this time of year.