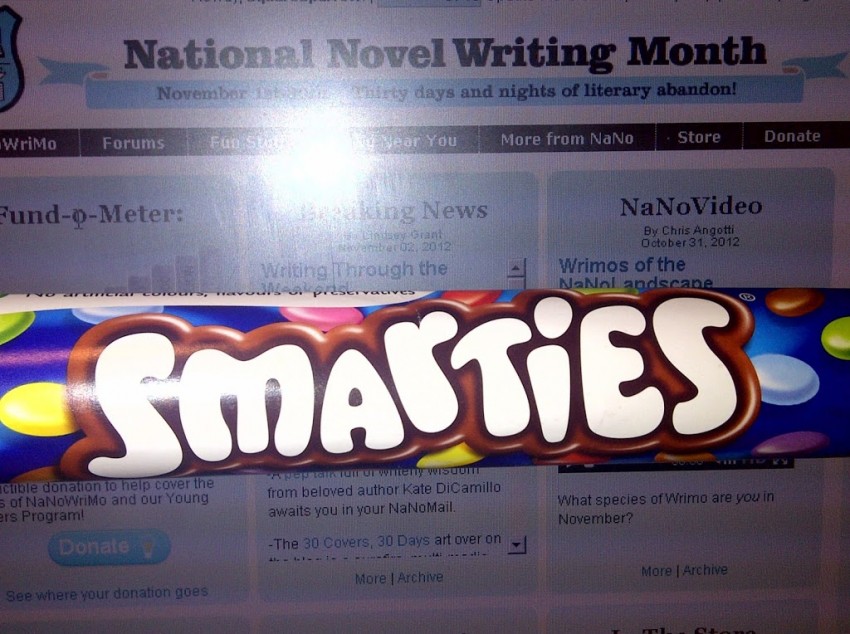 Son+Heir and I had decided to subscribe to two very different projects this month. Suffice to say, one of us was to be growing a moustache and the other was to be taking part in National Novel Writing Month. I shall leave it to my astute readers to work out which of us was planning to do which (and for those of you who guessed incorrectly, enough of your cheek!). However, I can report that by day four Son+Heir had annihilated his nascent whiskers, presumably because they risked interfering with his aerodynamics on the hockey pitch.

Yours Truly, however, is still going strong, by which I mean penning an average of 1,667 words per day and wondering how long her mind/body/imagination can keep it up. Originally, the plan was to combine the month-long exercise in writing self-discipline with a similarly challenging exercise in dietary discipline i.e. no chocolate for November. The sheer impracticality of this scheme rapidly became evident as I lay lifeless in front of the screen some time just before midnight on day three, trying to summon the energy to type the first word of that day. That’s when I knew for certain that NaNoWriMo and NoChoco were completely incompatible and cracked open a giant tube of Smarties which subsequently powered my virtual pen well into the wee sma’ hours.

And so to the official warning which is the purpose of this blog post: In view of this gobbling up of my precious “personal” writing time – as opposed to the paid ‘day job’ writing time – it is highly likely that blog posts this month may be few and far between, so I felt that an advance apology might be in order.

By way of compensation, however, here are a few photos that encapsulate the last week or two of life in and around the Sparrowholding…
Not to be outdone by the US, there has been some jostling for position going on out in the paddock, as pony politics prevailed. Incumbent Highland pony Large has been playing host to next door’s two equines while their field is “resting”. HunterGatherer quickly christened the hairy trio Fatso (ours), Wimpo (too scared to venture past Fatso to get into the stable) and Shorto (who rapidly found a kindred vertically challenged spirit in his new field mate, Cocoa the Shetland tup).

Meanwhile, things have got a lot tidier outside lately, thanks to several highly productive visits from Farmpa last week.  He may be “nearly 80 you know”, but that didn’t stop him getting just about everywhere – up ladders removing moss from the roof, cocooned in the polytunnel cutting back Vinnie the Vine, outside in the rain pruning the plum and apple trees and giving the lawn a final mow of the year during a rare period of glorious autumn sunshine.  The Sparrowholding doesn’t know what’s hit it!

Whilst the flora in the garden may be finished for the year, my own private potted primula plant is sitting resplendent on the kitchen window sill, bringing a vivid splash of violet vitality to the otherwise dull job of washing up.

Of course, one ideal way of dodging the domestic drudgery is to escape outside, and recently I was invited by a good friend to accompany her on a hike up nearby Dunning Glen.  It was an idyllic autumn afternoon, and the views during the ascent and from the top of the hill were sublime – a reminder, if one were ever needed, about how lucky we are to live in this unique and special part of the cosmos. So even though my pathetically unfit legs (not to mention the rest of me) were screaming out at the unaccustomed assault on their normal sedentary existence, I returned feeling thoroughly inspired and invigorated by all that good, clear, fresh Scottish air. Here’s hoping it blew away sufficient cobwebs to allow the creative muse to move in for November –  nine thousand words so far and counting!