It’s that time of year again: the lambs are pronking… 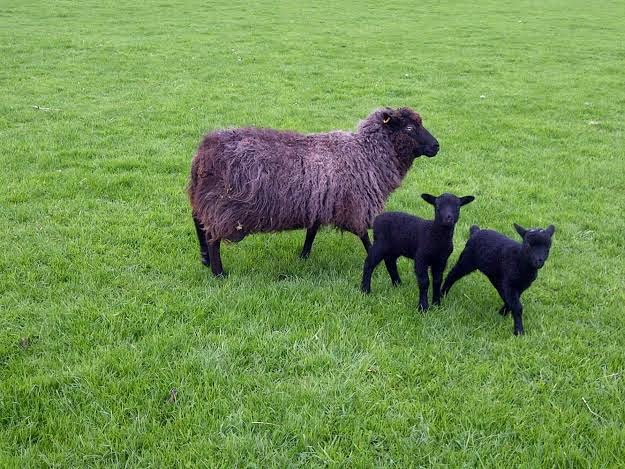 So that’s it over for another year then. Our Shetland ewes have now lambed, and the paddock is resounding to the patter of tiny cloven hooves as fourteen happy lambs pronk (see the explanatory blog post from May 2012) and prance from dawn till dusk. The final set of twins were born at around midnight on Friday after we’d spent a long day watching and waiting while the ewe prowled up and down the drystane dyke for hours, having refused her feed in the morning (and thus alerted us to the fact that she was thinking about “the deed”).
Penning her in for closer supervision later in the day proved a tad problematic, and at one point she almost flew past HunterGatherer’s right ear, though the fact that she managed to get airborne at all despite her vast girth is nothing short of a miracle.
There is a fifteenth lamb, but sadly the poor wee soul is not up to pronking, as when she was born first thing on Saturday morning, her legs had no strength at all – a physiotherapist friend suspects she sustained a spinal trauma during the birth. The only part of her body she could move was her head, so we sat her propped up on one of HunterGatherer’s boiler suits for the first 24 hours and tube fed her colostrum (the rich milk that ewes produce just after birth) to give her a fighting chance.
Then to keep her out of the chilling rain last night, we cleared a space next to Vinnie the Vine in the polytunnel and popped mum and bambino in there for the night. This morning, she has managed to get up on to her feet and is even taking a few hesitant steps, but we’re not sure she has the balance required to suckle her mum yet, so we’re keeping a close eye on her. Her chances, to be honest, don’t look great at the moment.
I’ve posted photos of all the other lambs on the Square Sparrow Facebook page each day as they arrived, so here are the final four to complete the set: Orangina (our second “orange” ewe, aptly named after my favourite soft drink by our lovely new neighbour, S.) had twins – a boy and a girl – while one of our young ewes, SplitEar, had a single baby girl (the one trying to find her feet in the photo below). Lulu, the “limp” lamb, is in the 3rd to 6th photos.

It’s also great to see welcome signs of plant life and growth in the garden once again. The only problem with that, of course, is that the weed life is also springing into life even faster! I made my first rhubarb crumble of the season last night, and HunterGatherer and I polished off a portion topped with some Porrelli tablet ice cream. A winning combo… I use Delia’s crumble recipe, and have done since I can remember (rub tog. 8oz of plain flour and 3 oz butter till crumb-like then add 4 oz of sugar). My own little “twist” is that I also sprinkle demerara sugar over the top of the crumble before cooking, to give it extra zing!

Meanwhile in the milder climes of the polytunnel, the asparagus is growing nicely. It’s best steamed – if you have a steamer – but also delicious boiled. Just watch not to boil for too long, though, or it loses some of its unique fresh-from-the-garden flavour. On this occasion, we steamed the tips then dipped them in HunterGatherer’s special Marie Rose dip, which he makes himself. And very tasty it was, too!