Live on Radio2 with Jeremy Vine! 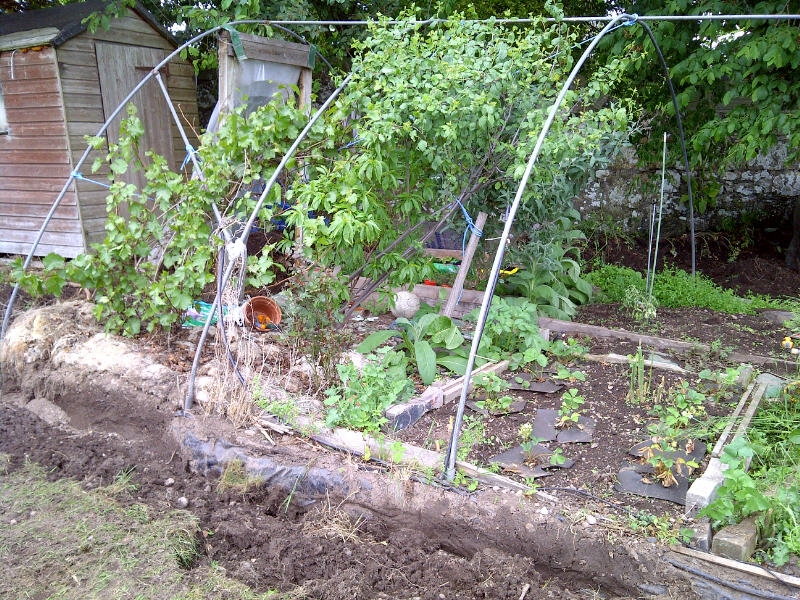 Can’t believe it’s been a whole week since I last sat down to blog – but in view of the monumental number of items that we’ve managed to (at least partially) tick off the “to do” list both in the ‘hoose’ and on the Sparrowholding, I reckon I have earned a pardon for my slight lapse in putting pen to paper/finger to key (or whatever one says these days).
The race to get the whole place shipshape before Daughter no1’s 21st Ceilidh continues apace. Grass has been madly mown, weeds beaten into submission, and the polytunnel re-covered (HunterGatherer has still to ‘recover’ from the nightmare of the re-cover!). The plasterer has been to plaster the bathroom (and eliminated all traces of HG’s previous decorating debacles), the painter is due tomorrow to stick wallpaper up in the hallway and our house currently looks as if a tornado has passed through it (twice).
Being so halikit (Scots word for clumsy) that I am unable to decide even which hand to hold a pair of scissors in, I’m 100% not qualified to do any more than scrape the old paper off the walls – and that is precisely what I was doing till 4 a.m. the other morning to prepare for the plasterer’s presence. In between all the chores (ooh, and don’t forget the day job!), also had to trek Son&Heir and his Scotland U18 hockey team mate all the way doon to Troon (end of the universe – the two teenboys were speechless at how quiet this west coast town was!) on Thursday night, so they were ready to head off on the ferry to Ulster for a weekend of matches.  Sadly the Scottish lads lost all three matches – but being Scots, they were dignified losers, having had much practice both personally and nationally at being philosophical in defeat.  It certainly didn’t seem to have jaded their appetites, as Son&Heir returned proudly boasting of his prodigious abilities in the cheesecake eating challenge!  Hmmm, so much for elite sportsmen who religiously follow a carefully calculated dietary regime…
Talking of things culinary, I met our local wonderwoman, P, last night to discuss catering for the Ceilidh.  And when I say wonderwoman, I mean it: there’s scarcely an event that happens in our lovely wee locality that P has not run, assisted with, or supervised (eg the big lunch that I blogged about last week).  All this on top of holding down a full-time job and being a mum of three…
Folk like the phenomenal, multitasking  P form the very backbone of community life and I, for one, am in awe of all that she achieves.  One of her many talents is catering so – being no Nigella myself! – I readily commissioned her to concoct the party fare for the 70 odd (!) folk who’ll be attending the party in 2 weeks’ (in fact less than two weeks – help!!) time.  A quick meeting last night and the menu was sorted.  Ooh, and I managed to track down the lady at Celebration Cake Station in Perth to confirm the cake, as well. Two more jobs ticked off the list = result! (only another 102 to go…).
Meanwhile, out in the wider community, the Olympic Torch has been winding its way south towards Perth and this morning it arrived at local stately pile Scone Palace.  A few of our local choir who will be singing when it passes through our wee local town tomorrow were invited to the Palace to join the Perth contingent singing with the song’s composer, Perthshire’s very own Dougie Maclean.  And what a hoot we had!
A one-hour rehearsal was followed by a brief catching of the breath and then it was straight into the bigwigs’ marquee to provide post-prandial entertainment for the Provost and other honoured guests after their lunch (hope they didn’t get indigestion!).
An unexpected surprise lay in store when we discovered that the BBC’s Jeremy Vine was broadcasting on Radio2 live from the Palace.  Better still, the sensible chap thought it would be fitting for Dougie and the local choir to close his show.  Major excitement amongst the choir ranks ensued! It really was the perfect end to a once in a lifetime experience – and I’m still humming the chant “Singing along the Tay, Oh the eternal flame” as I type.
But now, it’s back to reality with a bump.  I returned to a plastered bathroom – only problem is that the floor, bath , sink and loo all seem to have been plastered in addition to the walls… *sighs and adds another item to the “to do” list* 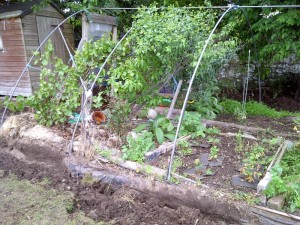 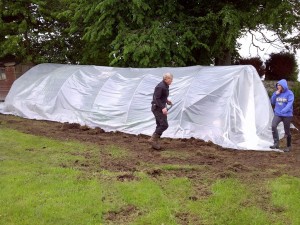 Not so naked now! 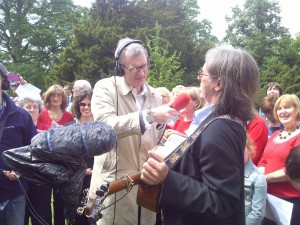 Jeremy Vine looks as if he’s accosting Dougie Maclean with a microphone! 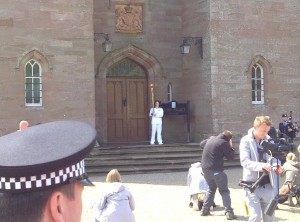 The Olympic torch bearer on the steps of Scone Palace