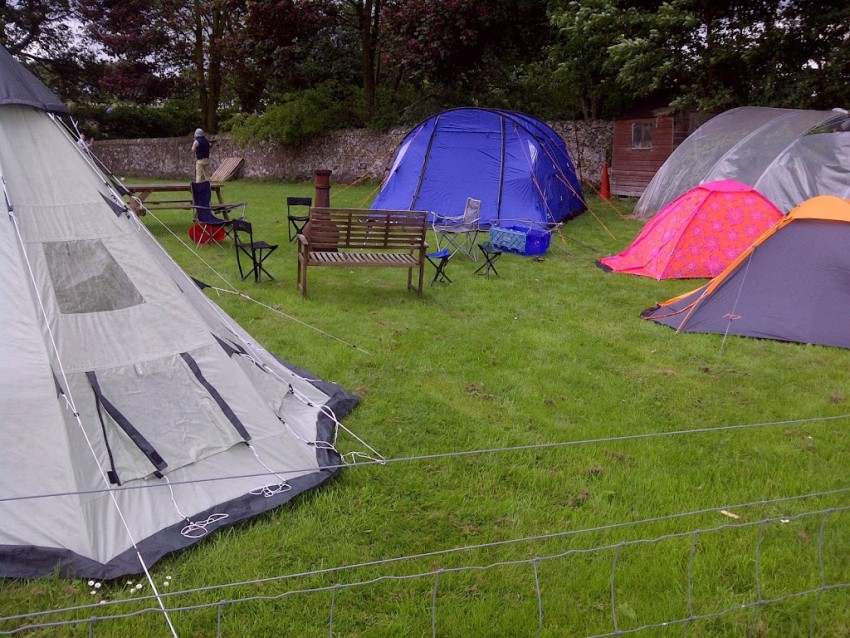 Last weekend we spent most of the daylight hours in Edinburgh (watching Scotland’s U18 hockey boys playing in the Celtic Cup) and the nights back at the Sparrowholding, where we were serenaded in the misty distance by the steady thump of drums from the T in the Park music festival. Usually this auspicious occasion in the Scottish music calendar heralds the springing up of a tented village in our garden (as per last year’s photo below). However, this year – with the daughterly duo 500-ish miles away in Cambridge (i.e. just out of earshot) and Son&Heir busy wielding his hockey stick in Edinburgh all weekend – none of my brood was attending “T”. 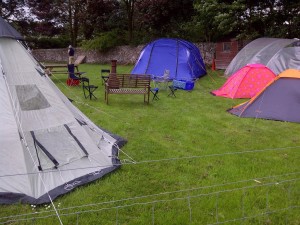 Despite their absence, I did still do a late pick-up run on Saturday night – to collect DaughterNo1’s boyfriend plus two of DaughterNo2’s friends (another parent having done the Friday run). Amazing that even without the darling daughters here, they still manage to involve me in raking out my old taxi hat! Fortunately my several years of previous experience prompted me to take a roll of bin bags with which to bedeck the seats and floors of the trusty wee Corsa. Just as well I did, too, as the mud at TITP on the Saturday was welly-deep (see photo below). Talking of wellies, early on Monday morning I spotted a lone muddy welly lying on Kinross High Street.  The car park of the town’s Park and Ride area was a sight for sore eyes too (NOT!). I really don’t mind all the extra folk in town, the slight inconvenience of roadblocks and the inevitable noise that the festival creates, as the visitors undoubtedly give the local economy a welcome boost.  What I do mind, however, is the ubiquitous litter that’s left lying in the aftermath. Perhaps festival goers haven’t come across that quaint Scottish expression: “Pit yer rubbish in the bin, ya tumshie!” (Direct translation: please put your detritus in the waste disposal receptacle provided, you turnip)… 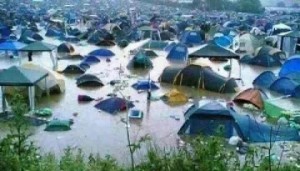 Campsite at T in the Park 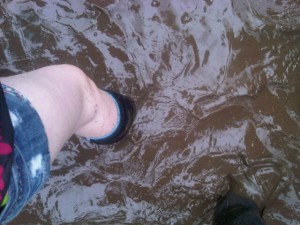 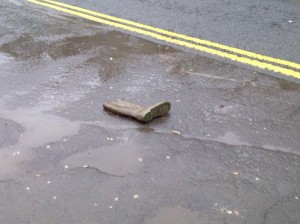 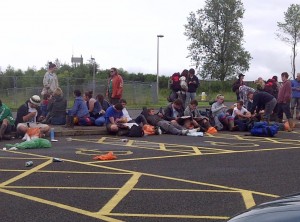 Er, hello: does anyone here know what a dustbin’s for?
This week has seen a catalogue of poorly creatures and plants in and around the Sparrow residence.  Little, the Shetland pony, is still suffering from laminitis (painful swelling of tissues in her feet caused by rich summer grass). This means the vet has consigned her to the stable, which she hates, as well as prescribing a cornucopia of pharmacological products (already costing more than the said Shetland pony herself is worth).  Also downing the painkillers (though not equine ones!) yesterday was Son&Heir, who was on the receiving end of a particularly pernicious tackle by a Welshman during Sunday’s international match.  Result: Welshman – 1; Son&Heir’s shoulder – 0. Spot the strapping in the photo below – and the makeshift sling concocted by the team physio out of a Scotland tracksuit top! To add insult to injury, the Scots were 1 goal up against the Welsh for almost the entire match, only to concede a goal in the last 17 seconds before the final whistle.  Very frustrating, but nothing like the frustration felt by another Scottish sportsman on Sunday afternoon, I suspect! 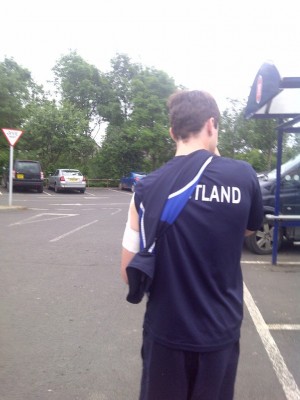 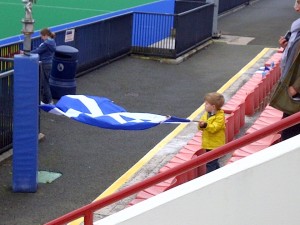 One day I’ll play for Scotland…

In addition to the warmblooded wounded warriors, there’s my out-of-sorts orchid, a gift from the daughterly duo a couple of years back.  Despite having flowered prodigiously for the past month (about five delicate flower heads on the go currently), it is looking distinctly peaky.  One of its leaves has turned yellow and appears to be mouldy.  Anyone out there know anything about the maladies of orchids?  I’m desperate to save the poor plant, but I suspect it might be on its way to the great greenhouse in the heavens if I don’t instigate dramatic orchid-healing measures soon. 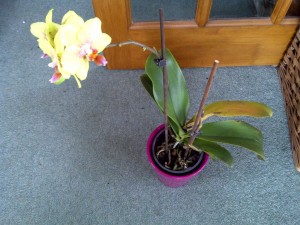 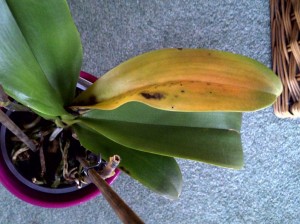 And now (I saved the best for last) to the final photo for this post, which shows a masterpiece of culinary endeavour created around midnight this evening by DaughterNo1’s boyfriend and myself: a chocolate and banana loaf. We can confirm that, in the words of the song, it was “truly scrumptious” as we couldn’t wait till tomorrow to check. BF is actually an Oxford engineering student, but that is of little consequence to me: what is of considerable consequence is that he can cook – well.  Not only that, he tidies up after himself, and has been known to stack and unstuck the dishwasher twice in one day.  After my experiences (the stuff of horror films) of trying to get Son&Heir not to leave foodstuffs growing – er, I mean lying around – in his room, it is a complete revelation to have an incumbent lad who assists on the domestic front.  Not only that, he’s paying us rent each week while he does his internship in Perth.  Which leads me to wonder whether I could perhaps enforce a similar rent arrangement on Son&Heir who is now back home. I suppose it’s always worth asking (even if you know the answer in advance…). 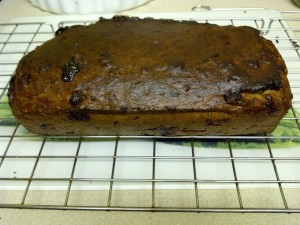