Orange rings and other things 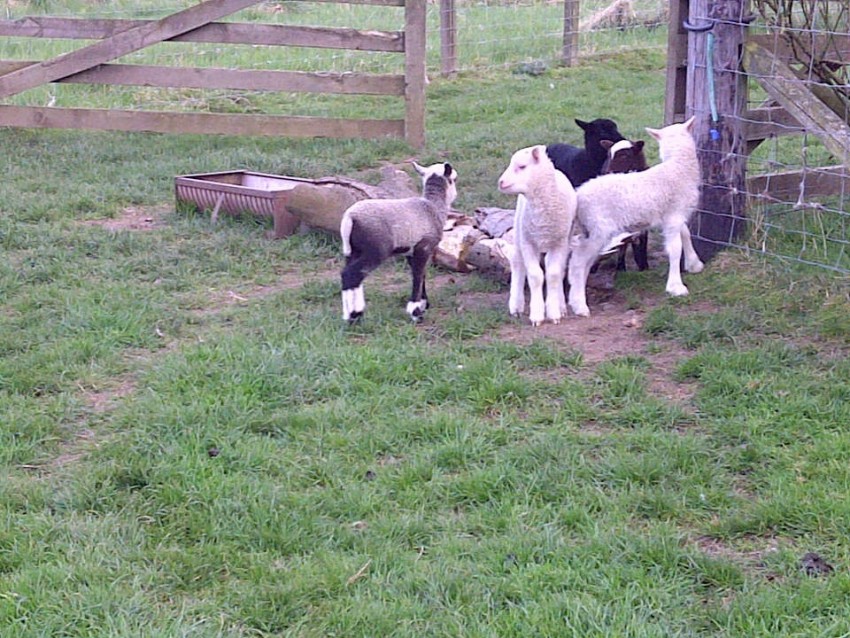 Sunday is generally anything but a day of rest on the smallholding, and yesterday was no exception. The last of our Shetland ewes lambed on Friday, and we’ve ended up with a “baker’s dozen” (i.e. 13) lambs.  Apparently this expression dates back to the days when bakers would make thirteen instead of a dozen loaves in a batch, to avoid being punished for selling underweight bread.
Sadly, over half of this year’s “crop” of lambs are males, meaning that – as none of them appears sufficiently macho-looking to be a “tup” (ram) in the future – they all have to be castrated. So the first job on yesterday’s lengthy “to do” list was the rather unpleasant task of applying an orange rubber ring to the poor wee chaps’ nether regions.  Even as a rough-tough farmer’s daughter, I still struggle with this concept, despite knowing that it needs done or we’d have a problem on our hands come weaning time in the autumn,  in the form a posse of rampant, hormone-charged male lambs running amok. So HunterGatherer did the deed while I averted my gaze…
Next task on the list was our burgeoning compost heap, which was bursting out over its netting enclosure in all directions. HG began to dig up and ferry fresh compost (possibly an oxymoron?) by wheelbarrow to the flowerbeds as a Sunday ‘treat’ for the rosebushes.  Meanwhile, Yours Truly grabbed the opportunity to nip into the village to wrestle with netting of a different sort i.e. play a quick game (OK, six quick games…) of tennis.  I should explain – in my defence – that this was a tennis club social event, which the secretary had taken the time and trouble to organise, so I felt it my moral duty to support this good lady (though the choice between ferrying compost to and fro and belting tennis balls to and fro did make the “moral duty” option considerably more appealing!).
By the time I returned, HunterGatherer had also zipped over the whole lawn (a third of an acre approx.) on his ride-on mower, and the whole place was beginning to look far more shipshape…  Which is just as well, as Daughter No. 1 has left us with strict instructions about the things that need “a good tidy up” before she returns north from the Dreamy Spires at the end of June.  A gaggle (not sure what the collective noun for swats is…) of her study buddies from St Something’s will be accompanying her north to attend her belated 21st birthday Supper’n Reels night in our local village hall.  D1’s actual birthday is half-way through May (eek! must post her card soon…), but as that falls in the middle of term, the party has to take place over a month later. This is fortunate indeed, given that the list of interior and exterior ‘anomalies’ which HunterGatherer and I have to address before the Sassenach invasion occurs is long – very long!
The hall wallpaper was one of the eyesores identified by our beloved eldest as needing “sorted”, and in fairness she does have a point. Unfortunately, the folk who had the house before we moved in (15 years ago this July) appear to have had shares in a tobacco factory, with the result that much of the wallpaper is stained a characteristic browny shade – not the most attractive then and certainly no less unattractive a decade and a half later.  After returning from another day’s ditch-digging endeavours on the land, HunterGatherer has thus begun wielding the steam wallpaper stripper with gusto this evening.  Our original plan was simply to paint the bare wall – until, that was, we saw the uneven bumps and lumps of plaster all over the surface of said wall and realised that a protective layer of wallpaper was definitely required for cosmetic reasons.
Of course, one of the great joys of middle age is that by this time in one’s life, one has learned to do oneself the things that one is good at and to commission other people to do everything else – in our case, wallpapering definitely falls into the “everything else” category, so I have rung a good friend who possesses the necessary papering pedigree and enlisted his services. I should explain that HG’s only previous attempt at papering is the reason that “re-paper bathroom” also appears on Daughter No.1’s list.  In his blissful ignorance of interior decor etiquette, HG left large bubbles in the paper, which he then eliminated by dint of slicing them with a Stanley knife.  End result: our bathroom walls looks as if they have been operated on by a plastic surgeon of very dubious repute.  We have had to endure looking at the resultant hideous scars every day for the past 15 years.  Sadly, even the Sudocrem plastered on the wall by toddler Son&Heir at various points in the early years didn’t magically heal them.
With the third week in June suddenly seeming much closer now that we’re a full week into May, all these tasks suddenly feel a tad more urgent than when Daughter no. 1 first drew them to our attention at Easter.  Don’t suppose by some miracle there’s a TV film crew currently looking for a “Changing Rooms” (or better still “changing entire houses”) project to get stuck into?  No – thought not… 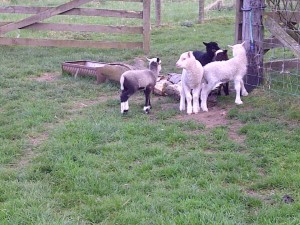