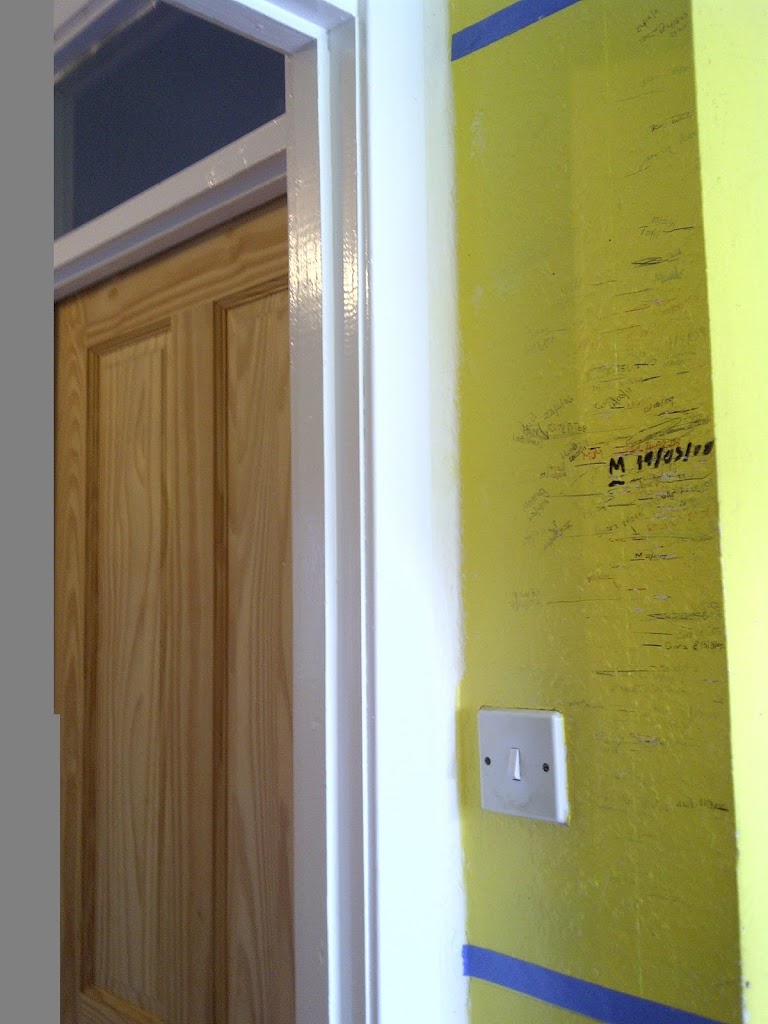 June is galloping past at a fair lick, and C-day (Ceilidh Day) is fast approaching.  HunterGatherer forayed into the deep south, complete with no. 2 daughter and a hired transit van to retrieve no.1 daughter with all her clobber plus most of son&heir’s clobber but not son&heir himself (his term not yet having finished). It was quickly evident to everyone involved that the combined mass of “stuff” accumulated by Sparrow Major and Sparrow Minor was never in a month of 36-hour Sundays going to fit back within the already bulging walls of the Sparrow residence.

Desperate situations call for desperate measures, so Yours Truly – who, as the four other members of the family were south of the Watford gap all weekend, had plenty of free time on her hands (ho ho!) – dashed to the local wood yard to purchase a new garden shed. And thank goodness I did, because by the time the bowels of the Transit van had been emptied, both Old Shed and New Shed were stuffed to the gunnels – not to mention every room in the house. Which, one shouldn’t forget, is a modest bungalow that is about to welcome some 20 house guests this weekend following daughter no.1’s 21st celebrations in the local village hall.
Fortunately, we are used to such invasions of youthful folk, as our close proximity to a certain major Rock FesTival has meant that for the past six or seven years, July has seen our garden become a make-shift extension of the festival campsite for up to 17 rock-weary revellers.  So post-birthday party bacon butties for 20 in the wee sma’ hours of Sunday should not pose a problem.  Just don’t, please, please, let it rain this weekend the way that it did last weekend.  By 7 p.m. last Friday night, I was on the point of looking out lifejackets for our poor saturated lambs L.  A similar downpour this coming weekend could mean some extremely soggy party-goers – and tents,  and clothes, and muddy boots x 40…  I think I shall ring Supergran and ask her to do one of her sundances. Between ourselves, Supergran rather fancies herself as a white witch, and to be honest, I’m so desperate for sunshine this weekend, I’ll give anything a go!
Arrangements for putting up somnambulant party guests after the event are proceeding apace. Most importantly, the painter has now completed the bathroom, hall and kitchen, thereby eliminating years of smoke and grime. Said smoke and grime had nothing to do with us, I hasten to add: we inherited it all when we – or, to be more accurate, the building society – bought the cottage 15 years ago.
Now the walls are magnificently nicotine-free and “all” that remains to be done is to put back in place the gazillions of things that had to be moved in order to let the unsuspecting painters, T and D,  gain access.  I suspect that poor T and his able assistant D had never ever in their careers had the pleasure (!) of working in quite such a chaotic abode – even though T has (and I quote) “been in the business 40 years, ye ken.”  All three offspring had strictly prohibited me from allowing a particular section of the wall beside the kitchen door to be painted over. The reason for their kitchen wall protectionist policy is that the said wall is inscribed with their heights and their friends’ heights over the past 10 or so years.  (Quote) “You cannot paint over them – they’re part of our family history”. So, Yours Truly found herself explaining to a frankly incredulous T and D that whilst they could weave their Dulux magic everywhere else in the kitchen, this bit of wall had to stay the original colour (see photo).  As we’d opted for a slightly less yellow yellow this time round, it now looks faintly ridiculous.  Still, at least the kids and their friends will be happy! 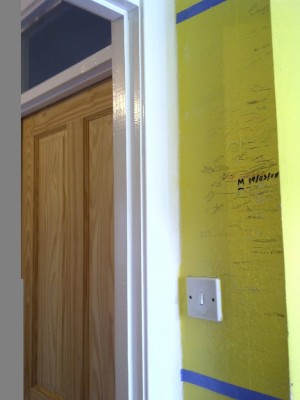 The growth chart in the kitchen – blue lines of masking tape are to remind painter not to paint over the names/dates/heights etc.
It has to be said that both student daughters have become distinctly badger-like in their habits this week.  For anyone not quite sure what I mean by this analogy, I’m referring to a badger’s habit of digging out his set by means of simply kicking all the dirt out the ‘front door’ between his hind legs. The girls adopted an alarmingly similar domestic approach i.e. anything that they reckoned was no longer cool or of practical/sentimental value to them was simply booted into the hall.  Suffice to say that the hall now resembles an extremely over-full charity shop while the sororial duo’s bedrooms are looking fantastic, thank you very much.
Talking of looking fantastic, I have a failure to report.  My attempts to lose 2 stone in two weeks just don’t seem to have borne fruit for some reason (could be something to do with the two bags of M&S Percy Pigs – or the box of simply ‘out of this world’ summer fruit choccies that I discovered in the local Sainsbury’s while buying Farmpa his Father’s Day gift.  Yes, it could have been either of those…  So if, on Saturday evening, the only garment that I can slip sveltely into is one of HunterGatherer’s hessian potato bags, I have only myself to blame (as well as M&S and Sainsbury’s, of course!).  Mark you, judging by the sign that appeared above the scales at our local gym this week, it would appear that my aspirations to lose weight rather pale into insignificance compared with those of another member. The sign (see photo below) reads: “No Nude Weighing”.  Reckon someone obviously forgot they were on candid camera… 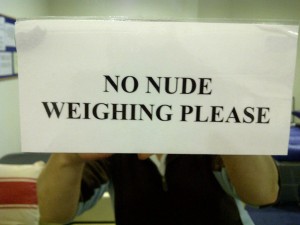 Live on Radio2 with Jeremy Vine!
There were 22 in the bed and the little one said... “I’m going to sleep in the car!”