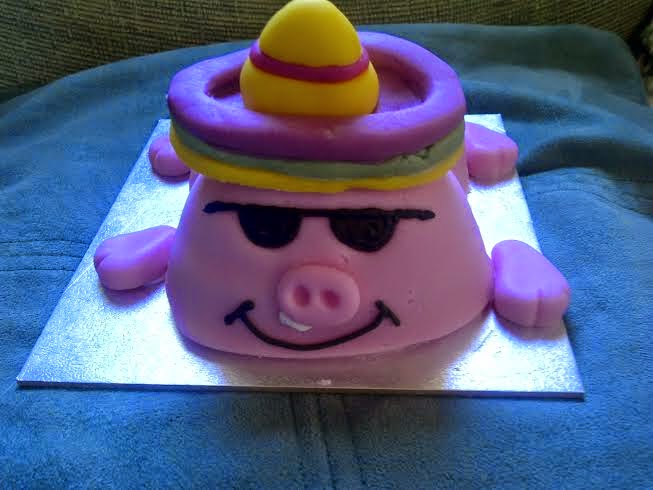 Wooosh! No sooner did we hit the middle of July than suddenly it was the middle of August… Where does the time go?! I recall hearing my mother ask a similar question 30 plus years ago, so I fear that this perceived temporal acceleration may be proportionately linked to the ever-increasing number of years I’ve spent on Planet Earth (currently standing at 51 years plus one week following last week’s birthday).
So what’s all happened in that vanished summer month?  Well, for starters, we enjoyed a visit to the Commonwealth Games over in the West of Scotland. And – marvel of marvels – we even managed to get all five of us there at the same hour, in the same city, in the same row of seats at Glasgow Green, to watch a couple of men’s hockey matches.
This feat of family engineering required two parents to get themselves through to Glasgow the night before (big adventure for HunterGatherer to see the city lights), one offspring to catch a late-night train from her current summer job in Cambridge, and the two remaining offspring to get a ridiculously early train from Edinburgh through to Glasgow. It felt as if we’d run a family marathon before we even sat down!
Three of our entourage (joined by Farmerbruv and my teenage niece) also managed to take in a session of rugby 7s at Ibrox, where the chilly, damp weather was more than compensated for by the slick and entertaining continuity announcer and the fast and furious rugby – wide-ranging in standard, but played in a great spirit of sportsmanship, win or lose.
Personally, one of my highlights of the day was when the Malaysian team, who had been soundly beaten (or, as we say up here, “gubbed”) in every match, walked slowly round the perimeter of the entire pitch before exiting the stadium. The players carried a Saltire and a Malaysian flag aloft, side by side, as they went, and shook hands with as many of the crowd as they could reach, evidently savouring every last second of their Scottish experience. That, for me, epitomised “the Games”.
Back at The Sparrowholding, with the exception of the plethora of soft fruits during July, the “performance” of our plant life in the garden has been distinctly less auspicious than that of the athletes in Glasgow.
We’re not sure if we’ve just been incredibly unlucky or whether chickweed has been particularly virulent everywhere this season, but since early June it has been insidious, stealthily strangling just about every little plant that has dared to venture a shoot above the ground.
Part of the problem is that we simply don’t have time to weed during the working week, and weekends just aren’t enough. So, much as I hate using chemicals in any shape or form in the garden, I suspect that next year we’re going to have to plant later, having blitzed the polytunnel with Roundup earlier in the season – or, to be specific, the parts of the polytunnel that don’t have resident asparagus, herbs and strawberries.
Of course, Vinnie the Vine will not be treated. In fact, he’s surpassed himself this year after last year’s paltry single bunch of grapes.  Nellie the nectarine bush, on the other hand, is getting a bit above herself. She’s muscling in on the space in the polytunnel and has only produced three (small, feeble and non-ripening) fruit in the six or so years we’ve had her. As retribution, we’re contemplating digging her up in the autumn and letting her take her chances in a sheltered part of the garden.
Thankfully, our asparagus was ready early enough in the season to avoid death by Triffid, and we planted quite mature courgette plants, so they’ve fortunately done OK, too. However, the cauliflowers, broccoli, carrots and parsnips have been almost entirely snuffed out. Thankfully, HunterGatherer also planted some carrots and parsnips outdoors, so we will have some root veggies to boil and roast come winter-time.
Talking of underground veggies, our potatoes have reached maturity. This week HunterGatherer cut off and removed all the shaws (leaves) to reduce the chances of blackleg spreading and to stop the tubers getting any larger, and we harvested any that were close to the surface. My modest investment last year in three smallish hessian bags from Dobbies has proved a good move. They’re perfect for storing potatoes in a dark cupboard so they don’t sweat and don’t turn green.
Now, being a passionate potato fanatic (having worked in the seed potato industry for several years during my youth), I have a “thing” about green potatoes.
As some of you may be aware, they are not at all good for you – so be sure to discard any potatoes that you buy/grow which have green patches on them. And sadly, it’s not enough just to cut off the offending green part, as the solanine toxin may already have spread to the whole tuber.
My offspring have regularly had to restrain me from throwing green potatoes off supermarket shelves when I spot them offered for sale to unsuspecting shoppers. I did once “slip” their arm lock and demand to speak to the store’s fruit and veg manager, who seemed genuinely ignorant of the possible perils of eating green spuds. You’d think they’d teach them basics like this at any self-respecting fruit’n veg induction course, wouldn’t you?
Anyway! Rant over – at least now perhaps a few more of the general public will be aware of this apparently little-known potato factoid thanks to this blog post. In fact, by next week there may well be reports of shoppers throwing potatoes off shelves in supermarkets all over the UK. Perhaps potato hurling might even make it on to the list of athletics events in The Gold Coast City in 2018…I think I may even make it on to the podium!
PS: To conclude, I thought you’d appreciate the fabulous wrapping paper that HunterGatherer procured for my birthday pressie…
Aug 15, 2014Karen Elwis
Family, Food & Drink323

A for apple, B for broccoli, C for cauliflower...
It's the Great Scottish Bake Off as DD1 returns to The Sparrowholding