Stovies and stripping the willow 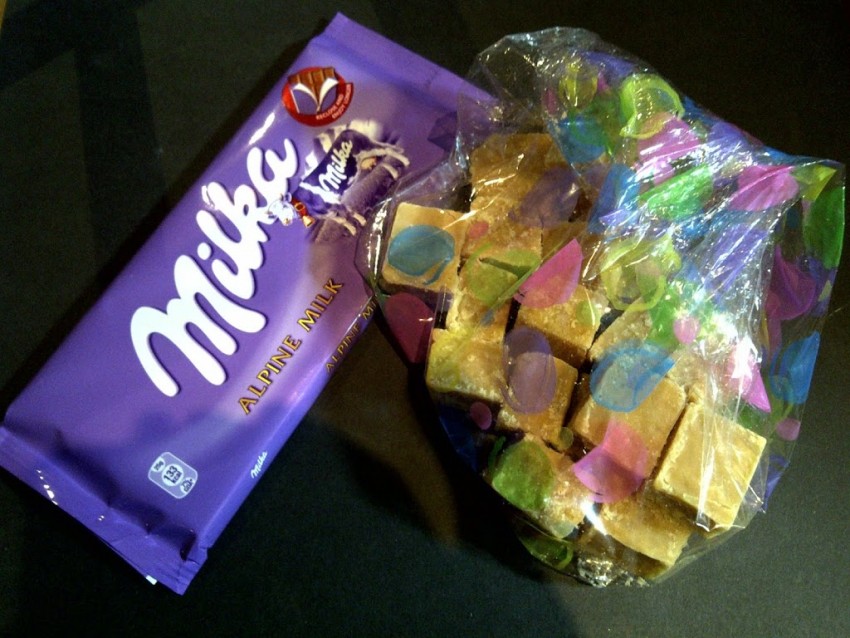 My acute sense of smell is legendary in our family – I inherit it from Farmpa (also a keen bloodhound!) and it has a tendency to drive HunterGatherer and our offspring mad.   I think it fair to say that my over-zealous olfactory faculties have been particularly tiresome to the kids during the teenage years, when I could detect scents of smoke/drink/etc at 50 paces. Indeed, had I not been tee-total, I fancy I might well have carved out a pretty successful career as a wine taster in some remote sun-kissed vineyard in France (a girl can dream!).  As it is, instead I spend most of my days sniffing out Son+Heir’s dirty hockey socks from their multifarious hiding places in his personal midden bedroom.

One distinct advantage, however, of having a good sense of smell is the ability to appreciate food.  And, as ever, I’ve been doing plenty of appreciating recently… including a batch of delicious home-made tablet brought to me by a fellow pedant and proofreader, S, who popped in a couple of weeks back to discuss an imminent collaboration.
Evidently S’s quests for orthographical excellence are mirrored (unlike mine) by her pursuit of perfection in the kitchen. Suffice to say, her tablet was a sugary hit of the highest order and disappeared post haste.  As indeed did the other gift which she brought with her: a bar of Swiss chocolate – perhaps not as versatile as a Swiss army knife but tastes infinitely better!

To add further torture to my best diet intentions, I’d the opportunity to tuck into another Scottish delicacy over the weekend – in the form of a stovie supper – when HunterGatherer and I enjoyed a rare evening out on Friday at a Valentine’s Ceilidh in the local hamlet church hall. And what a “rare” (in the Scots’s sense of the word) night it proved to be, kicking off with a Valentine’s Hat competition, which many locals (with the exception of our table – we were there with a couple of fellow Shetland sheep breeders) had evidently taken very seriously.  Entries ranged from a charming lady with an attractive green light shade on her head to intricate hand-made offerings featuring myriad red love hearts, to a gentleman wearing an illuminated top hat.  Competition was tough, and the judge certainly didn’t mince her words, dispatching one poor soul from the parade with an acetic “Well, you obviously haven’t made much effort at all!”

Needless to say, our bashful foursome watched the ongoings agog, while privately thanking our lucky stars that we hadn’t exposed ourselves to the straight-talking judge’s frank – albeit amusing provided you weren’t on the receiving end! – critique. The lively Ceilidh band kept the whole evening reeling along nicely, and HunterGatherer and I proved that despite stumbling disgracefully into our 50s (he last year and me this coming August) we can still dance a pretty mean Strip the Willow. The fact that I could barely walk this morning due to the after-effects of stuffing my normally welly-clad feet into court shoes for three hours is neither here nor there…

The rest of February bodes to be busy, as Yours Truly continue with one of several current projects: 65,000 plus words of proofreading (a novel – not written by me). This is to be followed by a similarly weighty proofing project in conjunction with my tablet-temptress proofreading pal. As a certain explorer is rumoured to have said, “I may be gone some time” i.e. blog posts might be scarce for the rest of this month. Chocolate, I suspect, will not…

Did someone mention chocolate?

What would be on your kist list?
A birthday to remember – for all the wrong reasons!