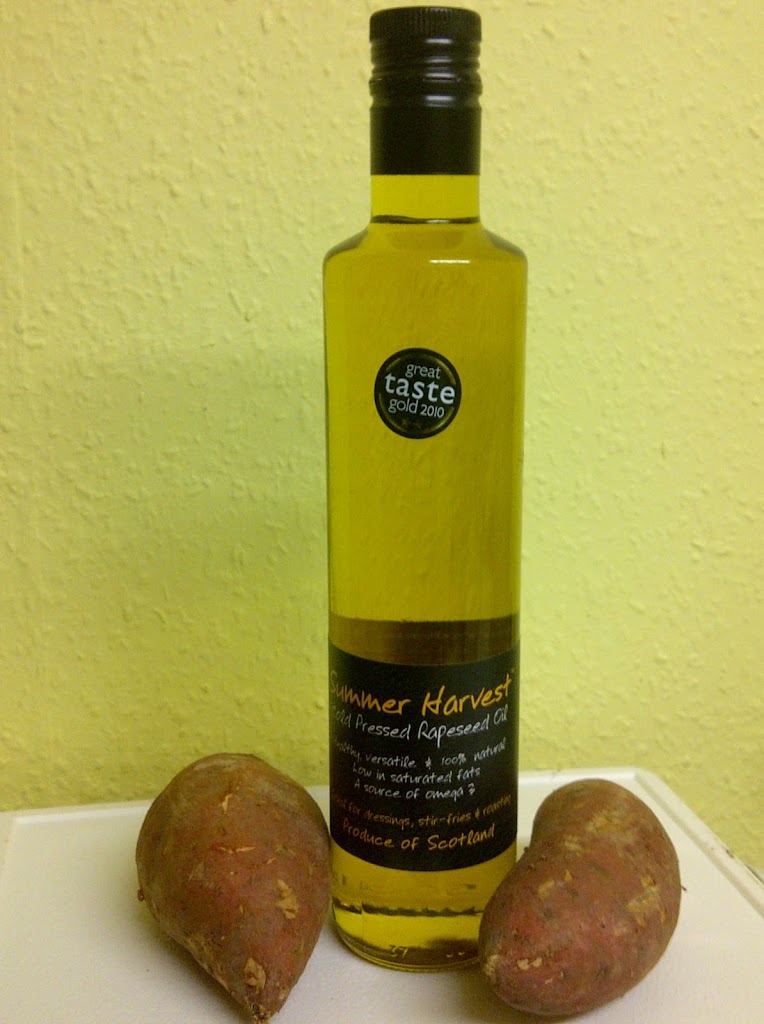 As a farmer’s daughter and former active member of a local Young Farmers’ Club (more moons ago than I care to remember…), I am acutely aware of the way in which farming businesses have had to diversify to survive over the past couple of decades. My own LittleBruv  launched a horse feed business (much to the delight of his many equine customers) while another nearby farming business opted to focus on human provender, more specifically a range of locally produced cooking oils. Having written a feature about this enterprising Scottish farming company, Summer Harvest Oils, for an agricultural magazine a few years ago, I had already been introduced to their gorgeous golden rapeseed oil, so I was more than a little chuffed when a complimentary bottle landed on my kitchen table in perfect time for Christmas.
For those of you not acquainted (or “acquent”, as Robbie Burns would have said) with oilseed rape, it’s that ubiquitous crop that turns much of the countryside a radiant shade of sunshine yellow in the spring and early summer each year. When the seeds ripen they are harvested, before being cold-pressed to extract their precious oil content. The oil is then filtered and bottled ready for use in commercial kitchens and homes throughout the UK. Rapeseed oil has numerous nutritional benefits over other oils.  For a start, it has only 6% saturated fats.  Secondly, it contains no trans fats and, thirdly, it boasts a high level of Omega 3 plus naturally occurring vitamin E.
Rapeseed oil’s light, fresh taste makes it perfect for dressings and marinades, while its unusually high flash point (230°C) means it’s ideal for roasting veggies and doing stir-fries.

Already ‘my precious’ bottle of Summer Harvest oil has seen active service on several occasions. Take Christmas morning, when we drizzled (as per the turkey driving cooking manual) the oil over the underside of the ‘burrrd’ before it was encased in tinfoil and squashed rather unceremoniously into our undersized oven. I am pleased to report that, contrary to the fears expressed in my previous blog post, the promisingly titled Terror of Being a Turkey Virgin, our festive fowl actually turned out all right; in fact, miraculously, it was cooked to perfection – not too dry and decidedly delicious.
Fuelled with unaccustomed culinary zeal in the wake of my turkey triumph, on Boxing Day I grabbed the bottle (of oil!) again and used it for roasting a selection of veggies to accompany leftover turkey meat.
As Daughter No2 would put it, this operation was “simples”.   We peeled a melange of Osprey potatoes, sweet potatoes and parsnips (the latter harvested from the garden less than an hour before by HunterGatherer), chopped them into uniform-ish chunks, and parboiled them for a few minutes, just to start them softening.  Then we drained the chunks, patted them dry and popped them on to a baking tray which had been preheated in the oven with a few tablespoons of rapeseed oil. We gave them a quick shoogle (technical Scottish term for “a good shake”) in the sizzling oil, wafted some ground seasalt and pepper over the top and then popped them in the oven at 200°C for half an hour or so until they were crispy and golden. Re-sult!
Next day it was the turn of soup-making: potato, onion and bacon soup, to be precise.  Once again, the Summer Harvest oil was perfect for frying the lardons, onions and potatoes briskly before they were engulfed in yummy homemade turkey stock (that turkey went a long way!).  Yesterday’s lunch sorted. 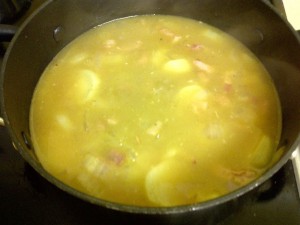 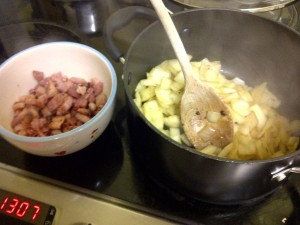 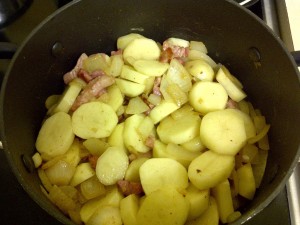 For tonight’s supper, the final batch of salvaged turkey meat was combined with some chopped ham, parsley, fried (in guess what!) leeks and leftover bread sauce to create a yummy cranberry, turkey and ham pie topped with crumpled sheets of filo pastry, fresh cranberries and orange zest.  Eagle-eyed ‘gourmande’ Daughter No1 had spotted the free recipe card in Sainsbury’s upon her return from Paris, but as she’s currently preoccupied with completing myriad online applications for internships, it was left to her boyfriend T (head chef) plus Yours Truly (sous-chef, with responsibility for chopping meat and leeks) to implement ‘the pie project’.
After this uncharacteristically hectic period in the Sparrowholding kitchen, the arrival of the New Year will undoubtedly see evening meals return to the standard issue ‘pasta with something’ on most days. However, my trusty bottle of Summer Harvest rapeseed oil is now a firm fixture beside the cooker – it’s what you might call a ‘golden’ example of a Scottish farm diversification success story!
Dec 29, 2012Karen Elwis
Uncategorized106