A rare night out… at the Edinburgh Tattoo 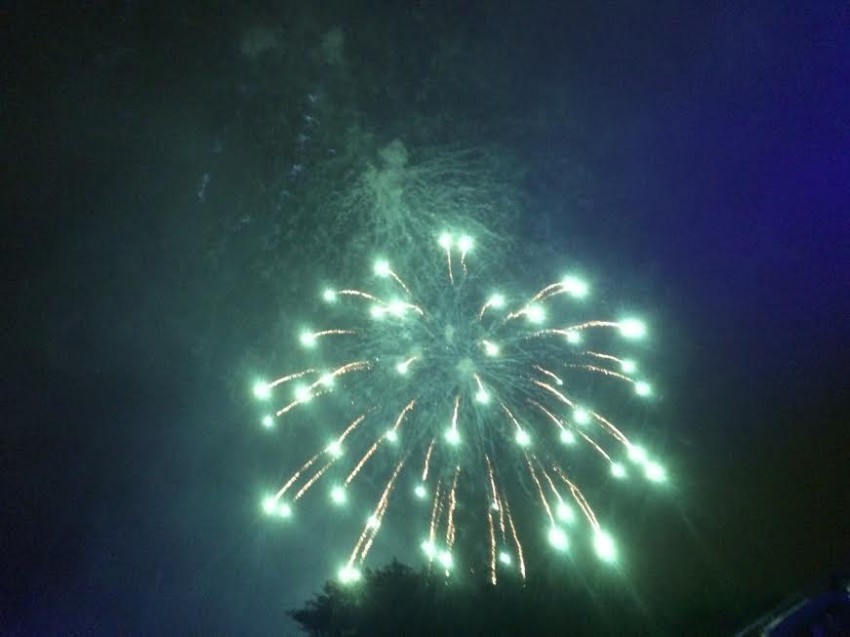 Last summer HunterGatherer mentioned in mournful tones that he'd never been to the Edinburgh Tattoo and had always yearned to see it, so for his birthday this year I bought him a ticket (and one for myself, boldly assuming that he'd appreciate having company on the night!).

Knowing that HG loves fireworks, I'd opted for the later performance of the Tattoo, so 9.30pm last Saturday night saw us queuing patiently (some of us more patiently than others...) on the Royal Mile, waiting to have our rucksacks searched en route to the Castle. As I'd not been to the Tattoo since I was 22 years old (to my horror, I realise that's now three decades ago!), I have to confess that I was quite looking forward to the experience myself, and we were both buzzing as we took our seats quite close to the facade of the castle. It's safe to say that we were not in the least disappointed with any aspect of the evening's entertainment that followed – with the possible exception of the thoughtless people who insisted on departing before the end to avoid the crowds, thereby obscuring other people's view of proceedings as they pushed their way smugly to the end of the rows of seats. It was their loss, as it transpired, as they missed the poignant lone piper playing from the turret of the castle and the joint rendition of Auld Lang Syne by the cast and audience that formed a suitably rousing conclusion to the night.

Anyway, apart from the behaviour of the selfish few, the whole evening was amazing, with a wide variety of impressive acts including entertaining songs and music from the US Army Europe Band, breathtakingly deft footwork from both the Lochiel Marching Drill Team and the Tattoo Highland Dancers, slick drills from military teams including the Royal Jordanian Armed Forces Band and Drill Team, and daring antics by the Imps Motorcycle Display team.

Without a shadow of doubt (no pun intended), the whole performance was enhanced by the spectacular light effects projected on to the historic stone walls of Edinburgh Castle. These ranged from snow on Everest (accompanied by 'real' snow falling simultaneously on to the audience in the stands ) to colourful national flags, and from Star Wars battleships to the profile of Her Majesty the Queen.

All in all, it was a truly memorable experience, and the familiar skirl of the pipes rang in our ears long after we had filed in an orderly fashion out of the Castle Esplanade and made our way back down the Royal Mile to find our car. To give you an idea of the variety on offer, there's a quick photomontage below. The Edinburgh Tattoo is definitely an experience worth having several times in one's life – in fact, we're already planning on going again in five years' time.

PS: As it's almost impossible for Yours Truly not to find a way of engineering food into any of these posts, may I just tell you that The burgers we dined on at Grand Cru before the show were very good, too! Moreover, walking up the Royal Mile to get to the tattoo reminded us of our magical meal three summers ago at The Witchery to mark my 50th birthday! Where has the time gone? Slainte! A welcome dram for an honoured visitor. Highland dancers strutting their stuff at the Tattoo The massed bands: what a sight and sound! These youngsters have nerves of steel (as must their parents have!) A snowy facade to emulate the slopes of Everest A firework farewell. There's something magical about fireworks over the castle.