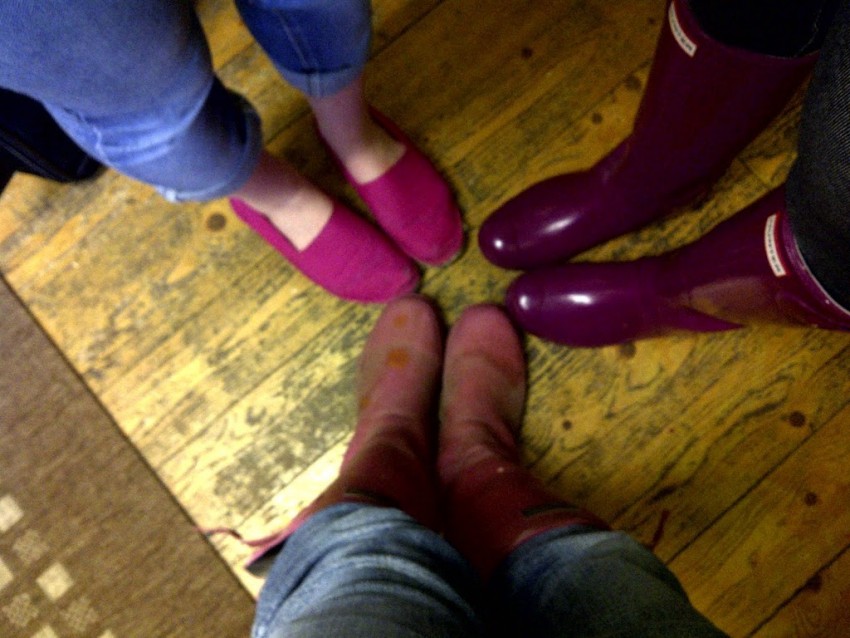 ﻿Manic is the only word that sums up the past week, so I’ve condensed this post into a mini ‘photoblog’. As previously reported, the household numbers were reduced just before the weekend by the departure of the daughterly duo, who headed off to keep order amongst visiting foreign language students in Cambridge. Before they departed we took a photo of the three “ladies of the house” – or rather of our feet, because we noticed we all had pink footwear on!  Two of us were dressed for a summer in Scotland: one of us (DaughterNo2) was not… 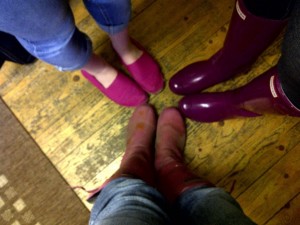 ﻿Incidentally, DaughterNo1 texted this afternoon to divulge that she had been up till 3 a.m. this morning supervising a teenage lad throwing up following closet excessive alcohol consumption. DaughterNo2 also reported having had to call paramedics following a similar incident! Seems the teens and alcohol problem isn’t just a British one…
Monday brought an invitation from my parents (aka Supergran and Farmpa) to lunch with them at The Brig Farm restaurant near Bridge of Earn. Loads of yummy fresh produce, most of it locally sourced. Re-sult! As we munched lunch, we exchanged news, which included me showing Farmpa a photo of our beans, peas and potatoes which are now through the ground. 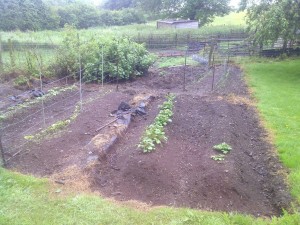 The pair of them immediately looked distinctly smug and revealed that the potatoes they are growing in their rockery (don’t ask!) are way ahead of ours.  That’s when I played my potato-growing ace and showed them the photo of our first boiling﻿ of new potatoes, fresh from the polytunnel this week. Tah dah :-). And very tasty my tattie trump cards were too! 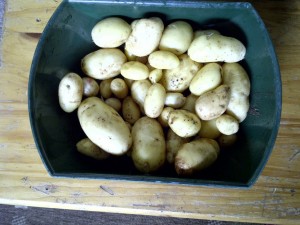 The polytunnel also yielded a few strawbs and a few spears of asparagus early in the week – though HunterGatherer rapped my knuckles for picking the latter. Apparently you’re not supposed to harvest asparagus from June onwards (to let the plants regenerate for next season).  Sad that, as there are another few spears already  waving at me and I’m looking at them wistfully, but I dutifully haven’t laid a finger on them. 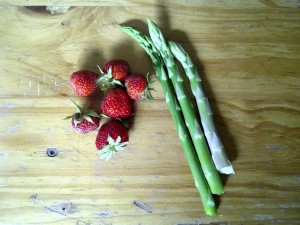 Last night I harvested several stalks of rhubarb from the “fruit” section of the veggie patch.  Something had gone wrong with the thicker stems – they were sort of spongy inside, as if the liquid had dried out.  I don’t know what was up with them – perhaps just a bit too old and shrivelled (know how they feel!). Still, I stewed the younger﻿ stalks in orange juice and honey, and added them to my porridge this morning. Not sure what that combo will do for my IBS, but hey, I enjoy living dangerously! 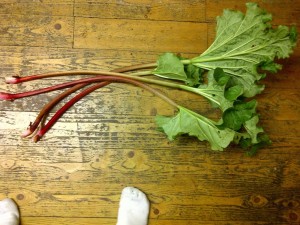 The rhubarb may have been slightly dodgy, but two of the gooseberry bushes are way beyond dodgy. They are decimated!  Some rotten pests (HG thinks “sawfly”?) have dined in extremis on the leaves, so that all that’s left behind are bare twiglets – with a sole gooseberry hinting tantatlisingly at what might have been. Any suggestions to avoid this next year on a postcard (or rather comment), please! It’s soul destroying seeing the poor bushes like this and it happens every year. 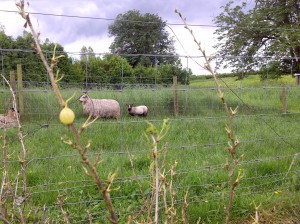 The most important task achieved on the Sparrowholding this week was shearing.  HunterGatherer girded his loins, embraced the backpain and set to work with his hand shears during a (very) rare break in the rain.  He managed to get all the ewes shorn and wormed, and gave the 14 lambs their second jab to protect against clostridial diseases.  Unfortunately most of the fleeces were only suitable for weed control in the garden, because HG had bedded the shed with woodchip﻿ in the winter to help keep the sheep dry.  We did manage to rescue a couple of the brown fleeces, though, and I’m dispatching them to a lovely spinning lady whom I encountered on the Twittersphere. 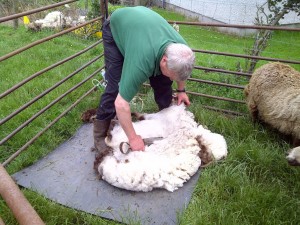 These poor “naked ladies” were thoroughly unimpressed with their impromptu disrobing – especially as the rain is forecast to get worse.  “Better soggy than maggoty,” we told them.  (They still looked unimpressed…) 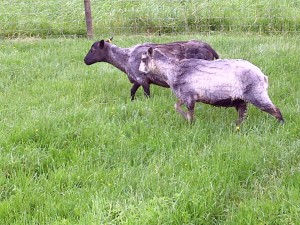 There’s been a lot of wildlife – in addition to the domestic animals –  in evidence around the smallholding this week.  Several swallows (or possibly housemartins?) have set up mudhome in our stable, keeping the poorly Shetland pony company.  Here are the babies peeking out and saying “hi” from on high! 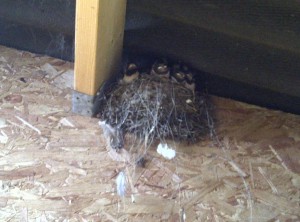 And last, but definitely not least, here’s a lovely wee toad who leapt out of the middle of the raised strawberry bed while we were working in the polytunnel this evening (HG has planted a bed of spinach so large we may feed the whole of Kinross-shire with it). Mr Toad crawled away under one of the wooden supports that holds the raised bed in place – he couldn’t get into our special terracotta toady des res, because it’s been taken over by ants! We’re fervently hoping that the distant thumping beat of T in the Park won’t deter him from coming out later to continue his slug feast.  He’s got a lot of eating to do! 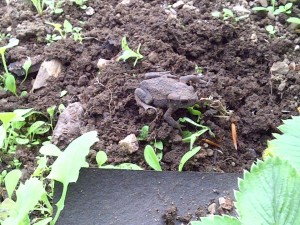 There were 22 in the bed and the little one said... “I’m going to sleep in the car!”
Music festivals, dislocated shoulders and banana bread