The terror of being a turkey virgin 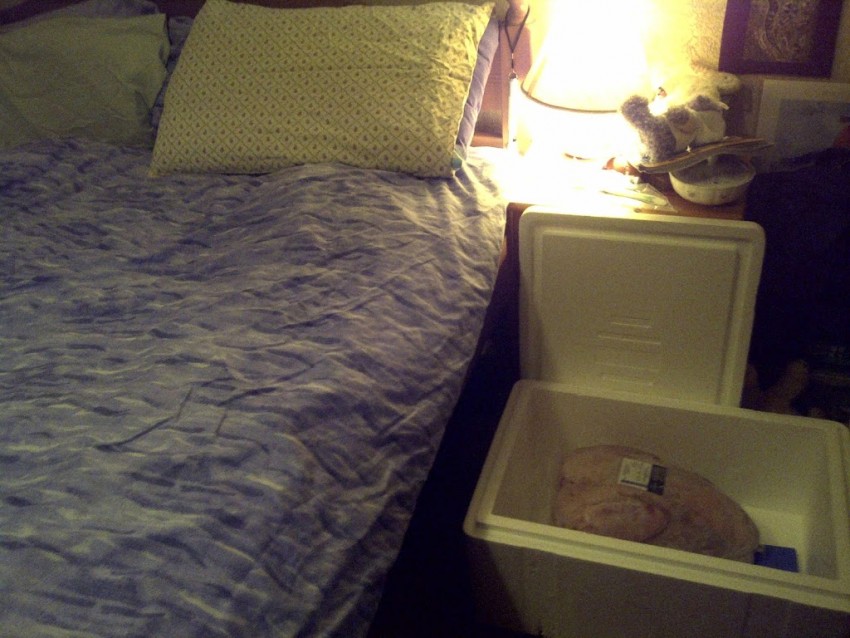 For various reasons, too numerous to mention, this will be the first year in my entire life (and bear in mind I’ll be 50 next year…) that I have been charged with delivering the dreaded Christmas dinner. Sitting round the table on the afternoon of the 25th will be the five Sparrowholding incumbents plus Farmpa and Supergran – who will drive the 40 minutes from the farm in anticipation of their yuletide meal.
To say that the prospect of tackling the turkey fills me with terror is to understate the case several million times.  My middle name being neither Delia nor Nigella, I am approaching Tuesday morning with a dread similar to the fear with which I used to approach the dentist’s chair (in the dark days before I became a patient of my current lovely dentist at Cherrybank Dental Spa, I should add!).
In any case, it’s not just the actual 25th one has to worry about with turkeys, as I discovered when I began to consult the “detailed instruction sheet” supplied by Donald Russell in Aberdeenshire along with the turkey itself. First there was a mathematical calculation to be done, involving a challenging conversion from pounds (or rather grams) to hours and minutes in oven.  Not a good start considering that when it comes to flaws, second only to my complete lack of cooking ability is my dearth of numerical ability.  This being the case, a scientific calculator was tracked down (with some difficulty) so Yours Truly could work out when the festive fowl should emerge from the freezer in readiness for the thawing process.
All would have been fine and well had we had a fridge big enough to house the turkey till “C-day”.  However, our fridge is already bursting at the seams with other festive fare, so we had to follow the “plan B” of turkey defrosting.  This turned out to be rather complicated, involving returning “the bird” to its original polystyrene container in the garage (the company recommended a “cool” environment and stipulated that ice packs should be added to ensure it didn’t get too warm).  These ice packs, the instructions advised us “should be washed and changed every night and morning” over the three days it would take the turkey to thaw.
We dutifully did everything required, but were extremely concerned, on the first morning (24 hours into the process), to find that the ice packs hadn’t defrosted one iota and that the turkey was still solid as a rock.
A panic phone call to Donald Russell was duly made (very impressively, it appears they man the helpline even on a Sunday!) and the young lady at the end of the line advised me politely that it might be better if we brought the bird into our house rather than the garage. However, she stressed that it must be kept in a cool room.  Not a problem normally, since we don’t have central heating. However, with everyone at home over the festive period, our trusty wood-burning stove keeps the sitting-room delightfully toasty (the sort of toasty that would probably breed pedigree salmonella on the outside of the turkey while the inside was still frozen). Meanwhile, the oven keeps the kitchen fairly warm, so that is no use either. And the kids each have a radiator in their respective bedrooms, which ruled them out – not to mention the fact that I suspect they might not have welcomed the turkey into their boudoirs with open arms.
The only room that has no form of heating is our (i.e. HunterGatherer’s and my) tiny bedroom. Which explains why there is currently a large polystyrene box strategically positioned on the floor on my side of the bed.  In this box sits our “big bird” (or “burrrd” as we say up here in Scotland). Worryingly, he still looks and feels extremely frozen this evening, and only time will tell if he will recover from his unfortunate slow start and be oven-ready in time for C-day. For the first time ever, I suspect that instead of diving straight for my stocking when I awake on Christmas morning, I shall be reaching out a tentative hand to grab the turkey beside me. Better make sure I don’t reach in the wrong direction or HunterGatherer might get a rude awakening!
Dec 24, 2012Karen Elwis
Uncategorized105