There were 22 in the bed and the little one said… “I’m going to sleep in the car!” 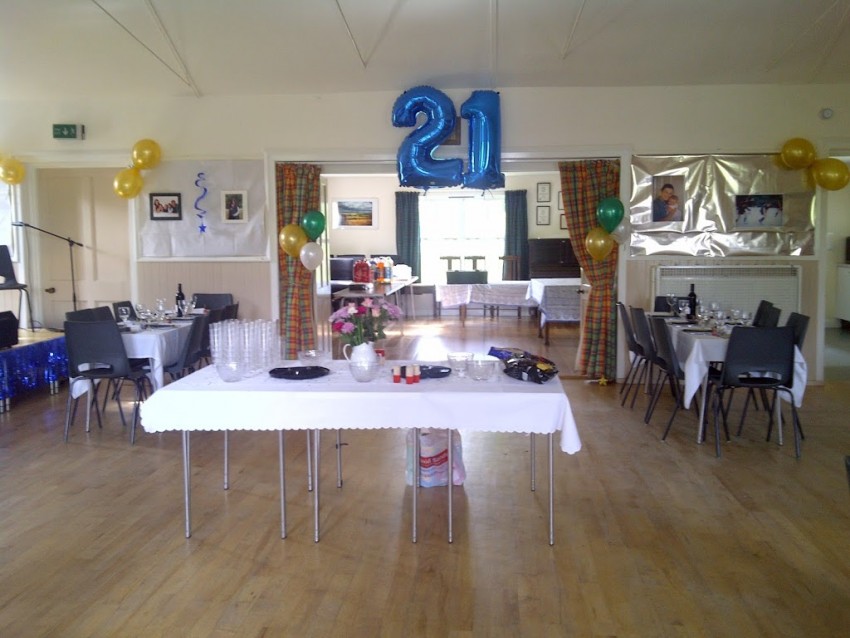 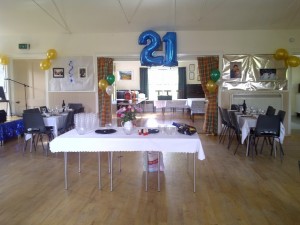 The Village Hall is ready to receive guests!
It has taken a full seven days to recover from last weekend’s belated 21st festivities, but I’m happy (and relieved!) to report that our lovely little village hall is still standing, HunterGatherer and I are also still standing, our wee hoosie is still standing, and DaughterNo.1 and her multifarious friends from home/school/uni/allotherpartsofherlife seem to have had a ball (although technically it was a Ceilidh, which is even more fun!).  Job done – and only 20 months to go till DaughterNo2’s 21st … 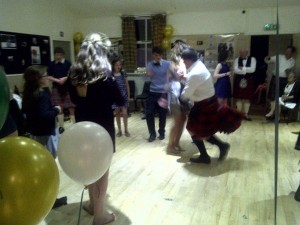 Dancing the night away Ceilidh-style

Ceilidhs have a great knack of appealing to all ages, and certainly the age range a week past Saturday went from the minuscule 4-year-old cousin to the “I’m nearly 80 you know” grandpa (aka Farmpa). As ever, phenomenal superwoman P – local caterer and organiser extraordinaire – was on top form: her lasagne was so delicious it made you want to apply for Italian citizenship, and her home-made chicken stroganoff would have done Count Pavel Stroganoff himself proud. The toe-tapping Tibbermore Band lifted the rafters of the hall with a succession of traditional Scottish reels and jigs, and the birthday girl herself even took to the stage at one point to lead them on her fiddle for the reel of the 51st. 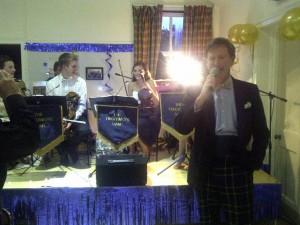 DaughterNo1 with fiddle at the ready

We’d taken the precaution of recruiting a couple of Scottish Country dance gurus to come along, who coaxed and encouraged even the ‘virgin’ Scottish Country Dancers (from Oxford) on to the floor – and kept them there. Celebration Cake Station in Perth supplied the cake, complete with icing tartan sash, and their client service was exceptional. And last, but definitely not least, there were the guests: 70 odd (!) folk who drank and ate and laughed and danced all night, then stayed on stoically to help clear up at the end.  Great nights are, beyond a shadow of a doubt, made of great people. 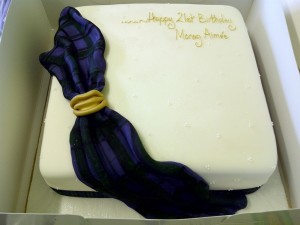 Thanks to Celebration Cake Station in Perth 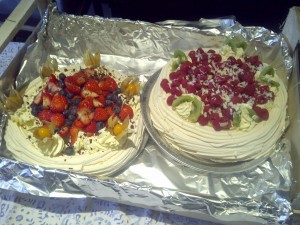 Mmm, extra pud – Auntie G’s pavlova…
Once the Ceilidh was over, the party continued back at our bursting-at-the-seams bungalow.  Eventually, by 3.30 a.m., there were 22 teenage and twenty-something-year-old house guests strewn over every available floor space. This included the hallway immediately outside the kitchen, which meant that Yours Truly was effectively penned in the said kitchen.  Figuring that neither the wooden floorboards underfoot nor the kitchen table would provide the necessary modicum of comfort, I retreated outside to the relative comfort of my wee Ford Fiesta, reclined the driver’s seat and proceeded to snatch a couple of precious hours’ sleep.
The dawn chorus woke me around 5 a.m., then FatCat (evidently unimpressed by the bodies lying around his familiar indoor sleeping haunts) jumped on the roof of the car at 6 a.m. and sat on the sunroof (can testify that it’s odd viewing the underbelly of a cat through a glass sunroof!), meowing his displeasure and demanding to come into the car. I remained unmoved by his remonstrations, until 7.30 a.m. when I roused myself sufficiently to drive back to the scene of the “night before” to make sure that there was nothing “unsuitable” left in or around the village hall and adjacent churchyard.  The last thing I wanted to greet worshipers that Sunday morning was an inappropriate undergarment hoisted on the village flagpole…
My eagle proofreading eyes proved to be extremely useful in spotting rogue cigarette butts amongst the grass and gravel around the hall. Other than that, however, there were no signs in the tranquil little hamlet of the previous evening’s revelries, so I bolted back home to launch the mammoth bacon and sausage sarnie marathon.  Half-asleep creatures began to emerge chrysalis-like from the cocoons of their sleeping bags, and eventually everyone was awake – though to say they were bright-eyed and bushy-tailed would be a gross exaggeration, if not an unadulterated lie. Most to be pitied were the four folk who had to set off at 10 a.m. to participate in hockey matches.  A definite case of not-quite-so ‘jolly’ hockeysticks for them! 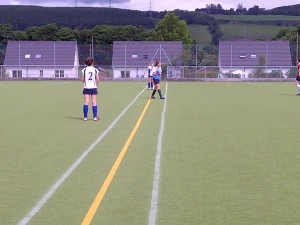 DaughterNo2 (blue bib) is armed and dangerous – and hung over…
Bodies started disappearing from the Sparrow residence as early as Sunday lunchtime, and a week later, all that remains is DaughterNo1’s boyfriend who has secured an engineering internship in Perth and is renting a room from us for two months this summer.  Meanwhile our daughterly duo have headed south to Cambridge to work for two months as house parents for groups of international teenage students in a language school.
Previous experience (DaughterNo1 worked there last summer) indicates that this task will not be without its challenges.  Such as the time when elder daughter dear rang in desperation around midnight one evening to ask me to look up and text her the Russian word for “bedtime”, so her recalcitrant Russian charges could no longer pretend they didn’t know what she was telling them!
For DaughterNo2, the role of keeping an eagle eye on the extracurricular antics of a bevy of belligerent teenagers is akin to a “poacher turned gamekeeper”.  It’s only a couple of years since she would have been the perpetrator in any shenanigans rather than the police(wo)man…  Looks like the leopardess will have to change her spots for the summer J.
Jul 2, 2012Karen Elwis
Uncategorized79