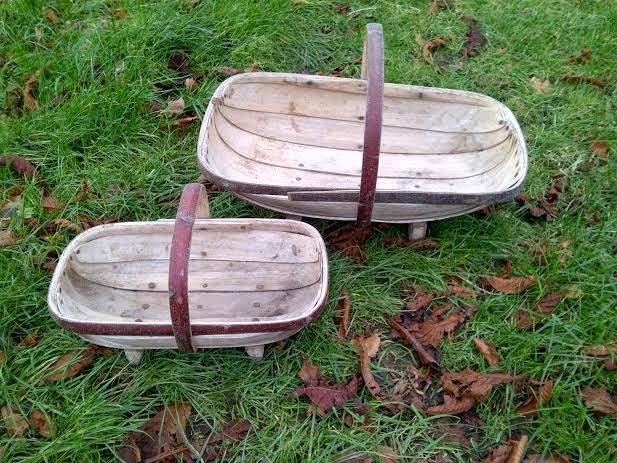 The recent spate of spring-like weather (interspersed, it has to be said, with weather more reminiscent of mid-November) has inspired us to rummage around in the garden shed and unearth (metaphorically speaking, of course – eccentric we may be, but we don’t keep earth in our sheds…) various horticultural accoutrements in anticipation of getting the garden “sorted out”. Obviously, we are kidding ourselves here, as the weeds that inhabit our garden are generally more than a match for HunterGatherer and his shining hoe, but he likes to consider himself a valiant slayer of chickweed.

One of my personal favourites when it comes to garden equipment is our duo of wooden trugs. Now here I have a confession to make. When we received these trusty trugs as a wedding gift (24 years ago, as you may remember if you read last month’s blog post), I wasn’t exactly smitten by them. Granted, I am very fond of wood, so I liked the feel and look of them well enough. However, in those days, I didn’t ever envisage actually using them. How wrong I was! Ironically, since we took up residence at The Sparrowholding nearly 17 years ago, they have turned out to be one of our most-used wedding gifts, regularly transporting homegrown produce from polytunnel or veggie patch to kitchen.
Another wedding gift which is still in active service nearly quarter of a century down the line is the electric orange squeezer that we received from the (then) Free Church Minister on the Isle of Mull and his lovely wife. It’s a simple wee device, but it’s so much quicker than doing the job manually. I’m a massive fan of fresh orange juice, so every time I pour the glistening orange nectar into my glass, I silently toast the donors.
Talking of toasts, we had occasion to raise a glass to DD2 a couple of weeks ago, when she popped back to the Sparrowholding during a whistle-stop visit to Scotland. I suspect that she was secretly counting the minutes till she could get on the plane back to Aix-en-Provence, where she has been spending a pleasantly warm and dry (meteorologically speaking at least…) ERASMUS exchange year.
We seized the opportunity of her presence in the “hameland” to stage a belated celebration of her 21st in the form of a meal for twelve at the relaxed, cosy setting of the Grouse and Claret near Kinross. A lovely, laughter-filled evening ensued, during which we were looked after impeccably by Vicki and David Futong and their team. As we chatted in the comfortable lounge over a Cava aperitif, we were treated to a fabulous array of canapés, before heading through to the dining room for a splendid repast.  Our feast was finished off with an appropriately Alpine-themed cake, topped by an icing model of the birthday girl complete with skis, which was created by Celebration Station in Perth. Another slight setback for the diet, of course, but it was worth it…
Just days later, DD2 shed her thermals and fled back to France where temperatures were in the mid-20s …. Meanwhile, DD1 was warming up in a slightly different fashion – for the much-anticipated clash of the Titans that is the annual Oxford vs Cambridge Women’s Rugby Blues Varsity match. HunterGatherer and I, plus my dentist sister-in-law and teenage nephew, headed down to Oxford for a weekend to watch the match (and were first treated to a very thorough and enlightening tour of the dreamy-spired city by DD1’s ever patient boyfriend). The match was a tense affair, and parental nerves were fairly frayed; however, it proved to be the dark blues’ day in the end, with the Oxford girls triumphing 17–12 (even if three of them – including ours! – were sporting black eyes).
A further exciting trip awaits later this month, as ever-thoughtful Supergran’s Xmas present to Yours Truly was a return flight to Marseilles for a long weekend, allowing me to soak up a few rays of southern French sunshine with DD2. OK, so three days won’t exactly see me bronzed and beautiful (not much chance of either, even if I stayed for three years, the truth be told…), but the prospect of not being rained upon keeps me perky on precipitation-filled days – of which there are many hereabouts…
Fortunately, I am also cheered up, even on the dreichest mornings, by the visitors to the bird feeders outside the office window. My spirits are quickly uplifted by the antics of the feathery five thousand whom we seem to be feeding on a daily basis currently. There is a strict pecking order as to who gets to eat when. The sparrows seem to rule the roost, with blue tits, coal tits, great tits, robins and yellow hammers snatching seeds slyly as soon as the sparrows’ backs are turned. With such a continuous flurry of activity, it’s a miracle I get any writing done at all!
When I’m not being distracted by things avian, the 11 things ovine in the adjacent paddock also contrive to prise my gaze away from the screen. Our Shetland breeding ewes certainly share one thing in common with Yours Truly at present, i.e. their girths are increasing with every passing day. There is, however, one major difference: hopefully most of them are carrying lambs – whereas my last “lamb” will be 19 years old next month… I do feel rather sorry for the poor girls: their pace has slowed down considerably in the past couple of weeks, and there is a lot of cumbersome waddling going on.
If HunterGatherer has calculated correctly (five months from the date he unleashed our tup/ram, Mungo, on the woolly harem) then lambing should start around the middle of April, so perhaps by the time I write my next post there may be a few additions to the (ovine branch of the) family. Will keep you posted!
Apr 1, 2014Karen Elwis
Family, Friends94