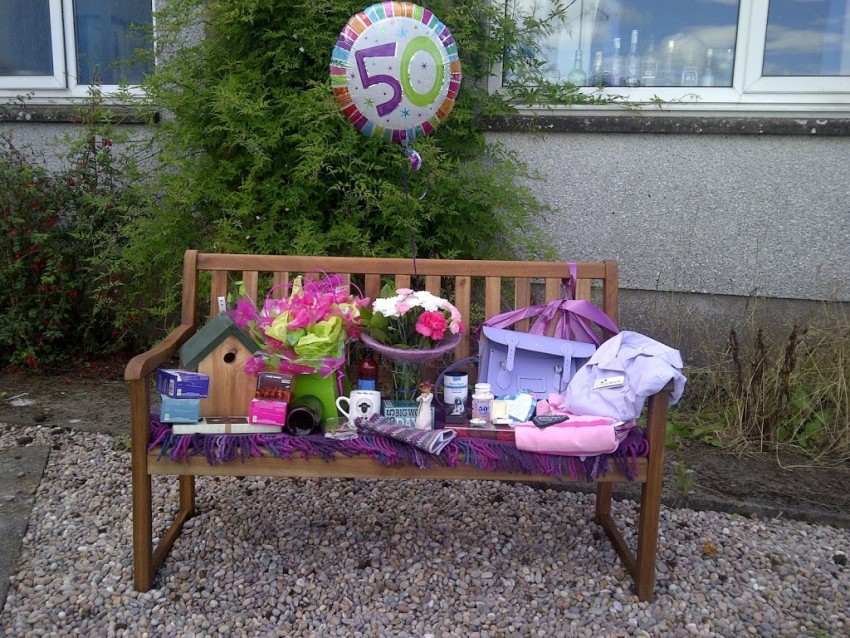 So it’s been and gone – the 50th birthday, I mean – and I’m still upright, although on the actual B-day itself I was laid low by a vile fluey lurgy.  Despite the rattling cough, blinding headache and feeling of being slightly removed from the universe, nothing short of the apocalypse was going to stand in the way of my planned birthday luncheon with Supergran at Scottish restaurant of the year Barley Bree in Muthill (pronounced “Mewe-thill”, not Mut-hill for anyone not familiar with this charming little Perthshire village!).
Although I was slightly disappointed not to be on top form to appreciate the whole experience, the restaurant certainly didn’t disappoint. The interior has a quaint, traditional ambiance, with a feature stone fireplace in the centre of the main dining area, which I imagine must be a welcome sight for weary travellers on winter days when Perthshire’s weather is doing its worst.
Our hostess, Barley Bree’s co-proprietor Alison, made us feel immediately at home, and we were soon poring over the menu and trying to work out which of the tempting array of dishes to sample.  Supergran opted for a pork starter and Yours Truly’s eye was caught by the soup of the day – which turned out to be a fabulously smooth and savoury chick pea and olive oil delicacy that slipped down even the sorest of throats a treat.
Having grown up on beef-producing farms, my dear ol’ mum and I were both quick to select the braised Aberdeen Angus Beef for our main course – Quality Meat Scotland would have been proud of us! Then, casting individuality to the wind once again, we both went for the same dessert option: a delicate, enticingly fragrant lavender crème brûlée, which provided a perfect end to a memorable meal.  Suitably replete, mum and daughter duly headed happily back to our respective abodes.
Fortunately, as the week went on Yours Truly gradually perked up, buoyed by flowers from various thoughtful friends and the arrival of a gorgeous Dobbies garden bench paired with a pink and purple Pringle rug – a combined gift from of my three dearest friends, who know my favourite colours!
Suffice to say that by Saturday evening, I was feeling almost back to normal (whatever normal is once you’re 50…).  This was just as well, as 20 girlfriends were arriving for a belated birthday celebration that night – each bearing a dish for a pot luck supper. So why had I not just whipped up a banquet for my long-suffering friends, you may ask? Well, the sad truth is that (highly ironically for someone who writes a lot about food) I am not very handy in the kitchen – indeed it takes me almost an entire day just to prepare and cook one meal for the five of us on the rare occasions when we’re all at home (and that’s just boiled egg with soldiers!). Fortunately, my lovely chums proved to be far more prodigious when it came to matters culinary, and a veritable feast soon amassed on our kitchen table.
An evening of merriment and memories ensued. Following the example of a (slightly older) friend who had held her 50th party a couple of years ago, I asked each of the guests to bring with them a memory of something we’d done together or of an occasion that they recalled from our shared past. Some of these incidents had completely slipped my mind – such as my inviting a good friend’s daughter for a sleepover, with the request that she brought her pogo stick (DD1 having a passion for pogo sticks at the time), or the multiple runs that I did to and from school ferrying forgotten objects to forgetful offspring, or my über-eager sideline support during school rugby and hockey matches… Ah, happy days from a chapter of life which (with Son+Heir having left school in June) has now closed.
Still, the exciting aspect of celebrating 50 years on planet earth in the 21st century is that there could still be another half century for me to get started on. My now officially ancient legs still managed to get through two 90-minute hockey sessions this week, so prospects are looking good! Better still, the celebrating isn’t quite over yet, as I’ve been invited out by another kind friend for a celebratory birthday lunch at another well-known Perthshire eatery later this week, which means that the most postponed diet in history is just going to have to wait a little longer…
Aug 15, 2013Karen Elwis
Uncategorized125

The end is nigh...
And suddenly it was September...