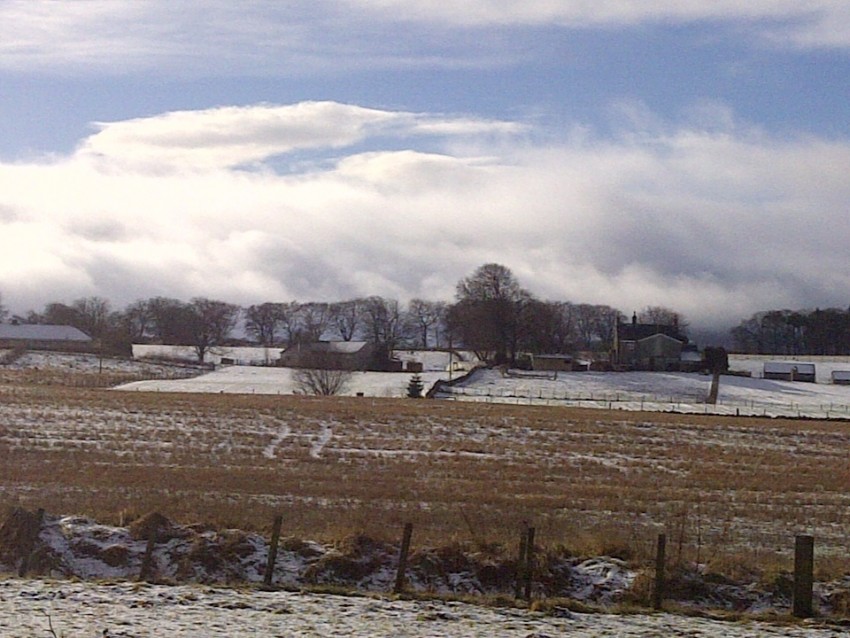 When not correcting other folk’s words, I pen a few of my own and am a member of our local Creative Writing Group, which meets twice monthly.  We’re an eclectic group and produce work that ranges from lyrical poetry to sci-fi to amusing anecdote.  For our last meeting, the optional brief was to imagine that we’d been given a short time to pack our most precious possessions and leave our home, possibly never to return…  We were given a fictional “kist” (old Scots word for “chest” or “trunk”) in which to place the chosen objects and, to my surprise, apart from the family, FatCat, FatHorse and the Chocolate Sheep, plus essentials such as passports and critical paperwork, there were very few material possessions that really meant a lot to me.  Here’s my motley collection of “treasures” which I felt would be worth saving:
Sentimentals: my kist list
First up, would be an album of photos, including a wedding photo of HunterGatherer and myself (so any grandchildren would know we weren’t always grey and wrinkly!) plus a selection of our three offspring growing up from infancy to now – just a few snaps to remind us how they’ve stretched from cute, cuddly bundles of mischief to edgy, adolescents and eventually (in the case of the girls, at least!) to mature, sensible young adults. These are irreplaceable memories that, as a mother, I would be terribly sad to lose.
Second into my kist would be the small, furry teddy that my mum (aka Supergran) gave me when I travelled abroad on school exchanges as a teenager. She knew that I had no room in my luggage for a soft toy, not to mention the fact that it would not necessarily be deemed “cool” to carry a full-grown ted with me as a hip, trendy teen. So she removed a fawn, 3-inch-high teddy furry motif from a sleep suit that had been mine as a toddler (possibly one of the earliest recorded “onesies”!) and stitched a back onto it to form a tiny flat transportable teddy.
Third in would be my younger daughter’s first flute, which bears the scars of being the possession of a rather butter-fingered owner. Music has been an essential part of the past 21 years of child-rearing – almost every night for about a decade there were up to five music practices done in our household.  No X-boxes or PlayStations in sight at our “boring” residence! As the flute is the only instrument that would fit in my kist, it would have to be the memento of those musical years. One particular dent in it still fills me with maternal mortification.  Being a member of Sunday School at the time, Daughter dear had been asked to play in an adult-only Easter Communion at the local parish church, where everything tends to extremely conservative – and that’s with a capital ‘C’ and a lower case ‘c’! At one point in the service, there was a period of silence for meaningful contemplation, and DD chose that precise moment to allow her flute to roll off her lap and clang loudly onto the floor of the church. As if this was not bad enough, the clang was followed by the stertorial whisper of her father saying “Jesus Christ, girl!”  So the bashed but beautiful little curved-headed flute, full of happy and mortifying memories, has to come.
The fourth item on the sentimental list is peculiarly precious to me – it was given to me by a complete stranger on the Potato Marketing Board stand back in 1989 at the East of England Show near Peterborough. I was one of the Scottish Potato Representatives on the stand, tasked with chatting to all visitors and extolling the virtues of Scotland’s natural role as a producer of disease-free seed potatoes. While I was conversing with an elderly American gentleman about the merits of Scottish growing conditions, he suddenly plunged his hand into his pocket and leant towards me almost conspiratorially, whispering: “You seem the sort of girl who’d appreciate this.”
Then he pressed something smooth and flat swiftly into my palm.  Somewhat taken aback and not sure what my gift of stealth might be,  I looked at the object – it was a stone, polished till it almost shone, but not painted – completely natural. It was triangular in shape and half yellow/half grey in colour. Fortunately, I was well trained by SuperGran at an early age to appreciate stones – indeed she still can’t pass a white “chuckie” stone without commenting on it.  So my reaction of delight at this lovely and unexpected gift was completely genuine, a fact that was not lost on the donor. Leaning towards me again, he said earnestly: “There’s somethin’ special about rocks, isn’t there?” His wonderful words have stayed in my mind, and I see that stone as the symbol of the age-old bond that links man to the earth and its natural treasures – not diamonds or emeralds. Just pretty stones.
There is one final precious possession that I would try to find when packing my kist, and it is a single ear ring. A tiny ornate gold leaf that dangles from the traditional, drop ear ring metallic twist.  It is the sole survivor of the pair of ear rings that SuperGran bought me when I plucked up the courage to have my ears pierced – my first (and only) rebellious act after leaving high school. Leaves are significant for mum and me, as there is one particular bough of a tree on the farm where I grew up, which for some reason has leaves that dance in the wind and “sing”. Every autumn when they were turning to a different colour from their peers and “singing” their sibilant song, my mother would with me to the tree so we could both share in this magical music of the countryside. Simple pleasures.  What about you? What would you put in your kist?