You know those days when only chocolate will do…? 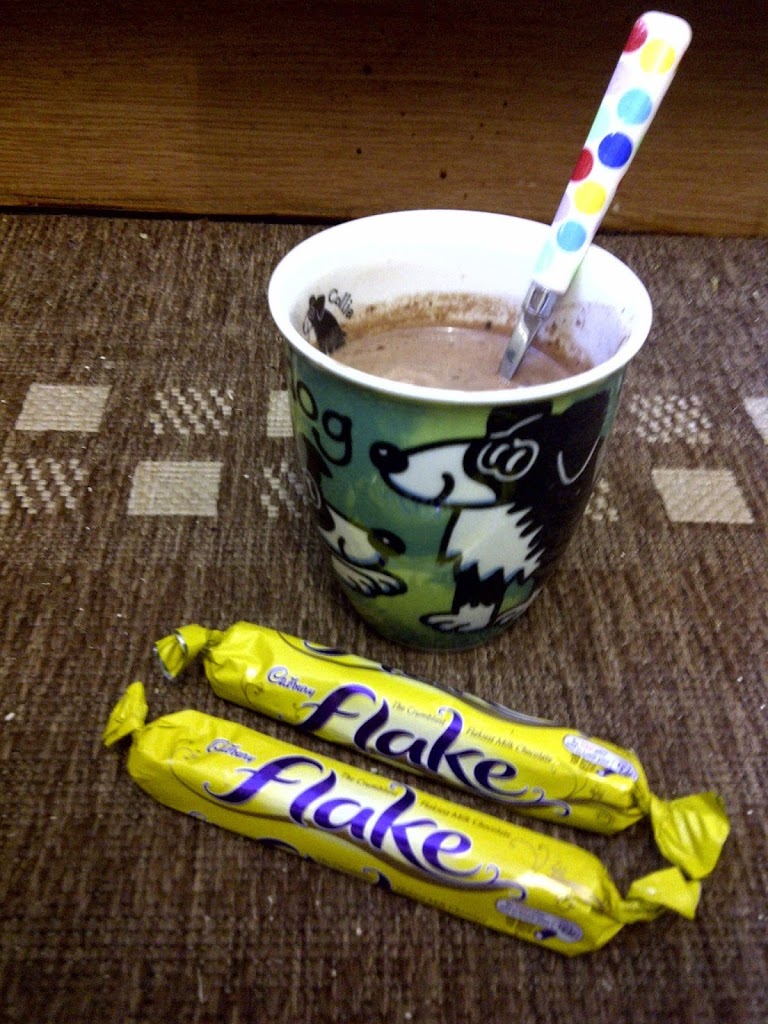 If yesterday had been Friday 13th, I could have forgiven it for throwing quite so many spanners in the Sparrowholding works, even though I don’t tend to believe in such superstitions – note the caveat “tend to” to cover myself…

By yesterday evening, there was only one solution to ease the frustration of the day’s proceedings. And as I don’t drink (although at times like this, I almost wish I did!), instead of grasping for a gin bottle, I delved into my precious, swiftly diminishing,  tin of Angelina’s potent hot chocolate powder that DD1 brought me from Paris.
Once the chocolatey concoction was ready for the finishing touches, I added a dollop of cream to compound my imminent cholesterol crisis and ferreted out two Cadbury’s flakes from their hiding place in the dark recesses of the kitchen cupboard.  And, before you ask, let me indulge in a little prolepsis: “no, the ‘get fit and slim for 50th birthday’ campaign has not been going well recently.”
The morning had started out reasonably successfully, with the usual feeding of the ravaging ovine (x20) and equine (x1) hordes.  Being keen to minimise the effort required in all such practical tasks (did someone say “lazy”?), I am indebted to my little brother for creating his cunning feed Blox (also ideal for the occasional game of outside Jenga! – see below).  I’m perfecting my technique of throwing the said blocks over the fence some distance into the field to land suitably spaced apart, thereby avoiding any ructions between the eager recipients.
Next it was back to the copywriting coalface, there to pen two articles about summer holidays.  Despite the six inches plus of soggy snow that I’d just waded through in the garden, surprisingly I was able to conjure up convincingly idyllic images of scuba-diving in the Caribbean and to rave eloquently about the marvels of Mexico, all without the slightest trace of bitterness.
As soon as the first article was finished, I emailed if off in triumph before proofreading the second.  And just as well I did, because literally two seconds later, my Broadband disappeared. Now as any freelance writer will tell you, Broadband is like the blacksmith’s anvil or the vicar’s bible – it’s difficult to do one’s job without it. Especially when one is slowly ticking towards the deadline for submission with no means of sending one’s masterpiece to the expectant client.
Never mind, I thought to myself smugly: I have a dongle! It took me about quarter of an hour of searching the house in vain to remember that I had, in fact, left my briefcase out in the car. So I hauled on my wellies (down, spellcheck, down!), dashed to the car, retrieved the bag and shut the passenger’s door.  At which point the rear window of my trusty wee Fiesta gave a loud crack, shattered into an opaque mosaic and descended into the boot.  Brilliant. The day was getting even better.
I hotfooted it back into the house to ring Farmpa and see if he could help me out of my predicament (not least because I had several tutees to teach in a village about four miles away that evening).  Then I remembered the unsent article,  whipped out the dongle (retrieved at the price of the rear windscreen) and connected up to my Netbook in fervent hope.
This is not a solution that I have had to resort to often – which is why, as I rapidly discovered, I had absolutely no recollection of the user name and password required to access it… Foiled again, and the deadline had now come and gone. Fortunately my lovely client was being incredibly kind and understanding, which helped to lessen the stress slightly.  Cue a ring at the doorbell: a duo of primary school aged sisters had arrived for their weekly French lesson.
As they left 45 minutes later, my giggling mini-French students could hardly wait to tell their “professeur” that large flakes of snow had begun to fall – straight through the gaping hole in the rear of her car.  Things were improving by the minute, n’est-ce pas?
It is at times like this that I know for certain that I have the best parents in the whole universe. For Farmpa and Supergran stoically drove 30 miles up the M90 in their aged (but fully glazed) farm Discovery, which they duly exchanged for my far from fully fenestrated Fiesta.  Consequently, I could now venture out into the white outside world to instruct more avid tutees, this time in the delights of English prose.
By the time I’d finished teaching, and had emerged into the darkness to drive home, the 9-inch layer of snow that had been precariously perched on top of the ‘Disco’ had slumped forward, mini-avalanche style, onto the front windscreen.
Having no gloves or even a jacket with me (I had left home in haste, after cobbling together a tarpaulin cover for the rear window of my car), I had to use my bare hands to remove about half a tonne of snow, icy handful by icy handful [note to pupils: repetition for effect], until the windscreen wipers were eventually unearthed and functional.
By this time, my digits had long since lost any feeling whatsoever – until, that is, I was driving home and the blood began to flow through them again.  I had forgotten just how painful an experience that can be – it brought tears to my eyes, I have to confess – yet it seemed, in semi- masochistic fashion, to be a perfectly fitting conclusion to a pretty foul day.
I returned to find HunterGatherer in bed (at 9.30pm – these farming chiels like their beauty sleep!). Unfortunately for him, he was soon ‘unearthed’ and put to work installing the new BT Hub, which had fortunately arrived in my absence.  And joy of joys: within half an hour I was back online, and so far so good.
Better still, my fingers rapidly recovered as I clutched my gloriously decadent mug of hot chocolate until, fuelled by purest cocoa-power, I felt ready to face another day!
Jan 24, 2013Karen Elwis
Uncategorized78

Back to normality (what is that again?)
Sibling rivalry leads to giant Jenga